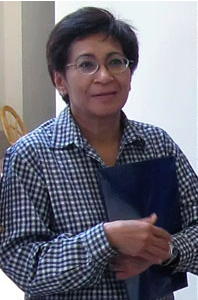 Malaysian astrophysicist Mazlan Othman may add a new job to her resume. She is currently director of the United Nations Office for Outer Space Affairs (UNOOSA), which deals space-related issues, ranging from international cooperation in peaceful uses of outer space to managing the growing problem of space debris.

According to numerous reports, Othman will be named as the UN ambassador to extraterrestrials, if and when they contact humanity. The post will require approval from UN scientific advisory committees and the General Assembly.

Othman, who led Malaysia's national space agency before heading to the U.N., and helped train that country's first astronaut, is scheduled to speak next week at a Royal Society event devoted to the implications of alien contact and the need for necessary political processes to be in place should that contact occur.

"The continued search for extraterrestrial communication...sustains the hope that someday humankind will receive signals from extraterrestrials," publication The Australian quoted Othman as saying. "When we do, we should have in place a coordinated response that takes into account all the sensitivities related to the subject. The U.N. is a ready-made mechanism for such coordination."

The publication also quoted Professor Richard Crowther, a specialist in space law and governance at the U.K. Space Agency, on Othman's suitability for the job: she "is absolutely the nearest thing we have to a 'take me to your leader' person."

Though contact with space aliens may not happen tomorrow, the recent discovery of potentially Earth-like planets, and of the existence of life forms in the harshest environments on Earth itself, have led to an increased focus on the possibility of extraterrestrial creatures. Famed physicist Stephen Hawking has recently helped to legitimize exopolitics, which looks at the public policy implications of alien life.

"To my mathematical brain, the numbers alone make thinking about aliens perfectly rational," The Times of London quoted Hawking as saying back in April. "The real challenge is to work out what aliens might actually be like."

And how best to deal with them.

Othman seems to be sympathetic toward such life forms. As The Australian points out, under the Outer Space Treaty of 1967, overseen by the Office for Outer Space Affairs, members of the U.N. agree to protect Earth against contamination by taking the precaution of "sterilizing" extraterrestrials. But, The Australian says, Othman "is understood to want a more tolerant approach."

If Hawking's thinking is correct, however, Othman may be in for some challenging diplomacy. Though he suspects most aliens will prove to be microbes and small animals, Hawking warns against trying to make contact with intelligent ETs. He thinks they'd likely be cruising the starways in search of resources, and potential colonies.

"We only have to look at ourselves," The Times quoted Hawking as saying, "to see how intelligent life might develop into something we wouldn't want to meet."

But then, perhaps Othman's time at the U.N., and that agency's long history of dealing with the fallout from humanity's foibles, makes her the perfect candidate for the job.

Update, 10:12 a.m. PDT: The story has been recast to include a newspaper report of Othman denying the purported appointment as an ambassador to the aliens.

Crave writer Edward Moyer, also CNET News' Saturday editor, once built a model of the DNA molecule for a PBS science series--out of telephone cord and tapioca balls. He also worked at USA Today and other pubs--waxing philosophical with Elvis' ex and slurping spaghetti with Roller Girl of "Boogie Nights," among other things. E-mail Ed with your story ideas and insights.