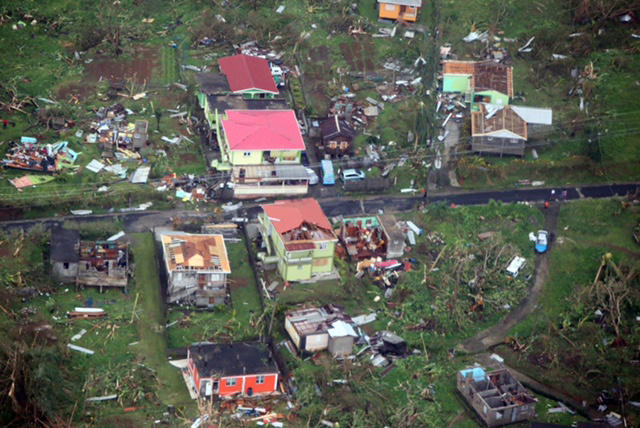 UNITED NATIONS -- The U.N. humanitarian office is launching a $31 million emergency appeal for the hurricane-battered Caribbean island of Dominica, which was hit by category 5 Hurricane Maria on Sept. 18.

The U.N. said Friday the appeal aims to provide emergency aid to 65,000 people from September to December 2017. It said $3 million was expected to be released later Friday from the U.N.'s Central Emergency Response Fund for Dominica.

Last Saturday, the island's leader, Prime Minister Roosevelt Skerrit, told the U.N. General Assembly that "the desolation is beyond imagination."

People around the world followed Skerrit's gripping Facebook posts as he described his roof being torn off and his home filling with water as Hurricane Maria swept over Dominica with 160 mph winds. He had to be rescued.

The storm tore off roofs, destroyed houses and buildings, inundated many areas with water and affected the entire population.

This week, the confirmed death toll rose to 27 and authorities said 27 others are still missing

Security forces said Monday they had controlled looting that began after Maria headed away to batter Puerto Rico. The island was under a 4 p.m. to 8 a.m. curfew after Maria hit and police said they arrested 120 people, most for violating the curfew.

The United Nations said was the fifth time on record that Dominica had taken a direct hit from a hurricane, but it said the island had never "faced a storm of such ferocity and strength."

Skerrit appealed to the U.N.'s 193 member nations for help for Dominica and other islands battered by hurricanes saying "let these extraordinary events elicit extraordinary efforts to rebuild nations sustainably."