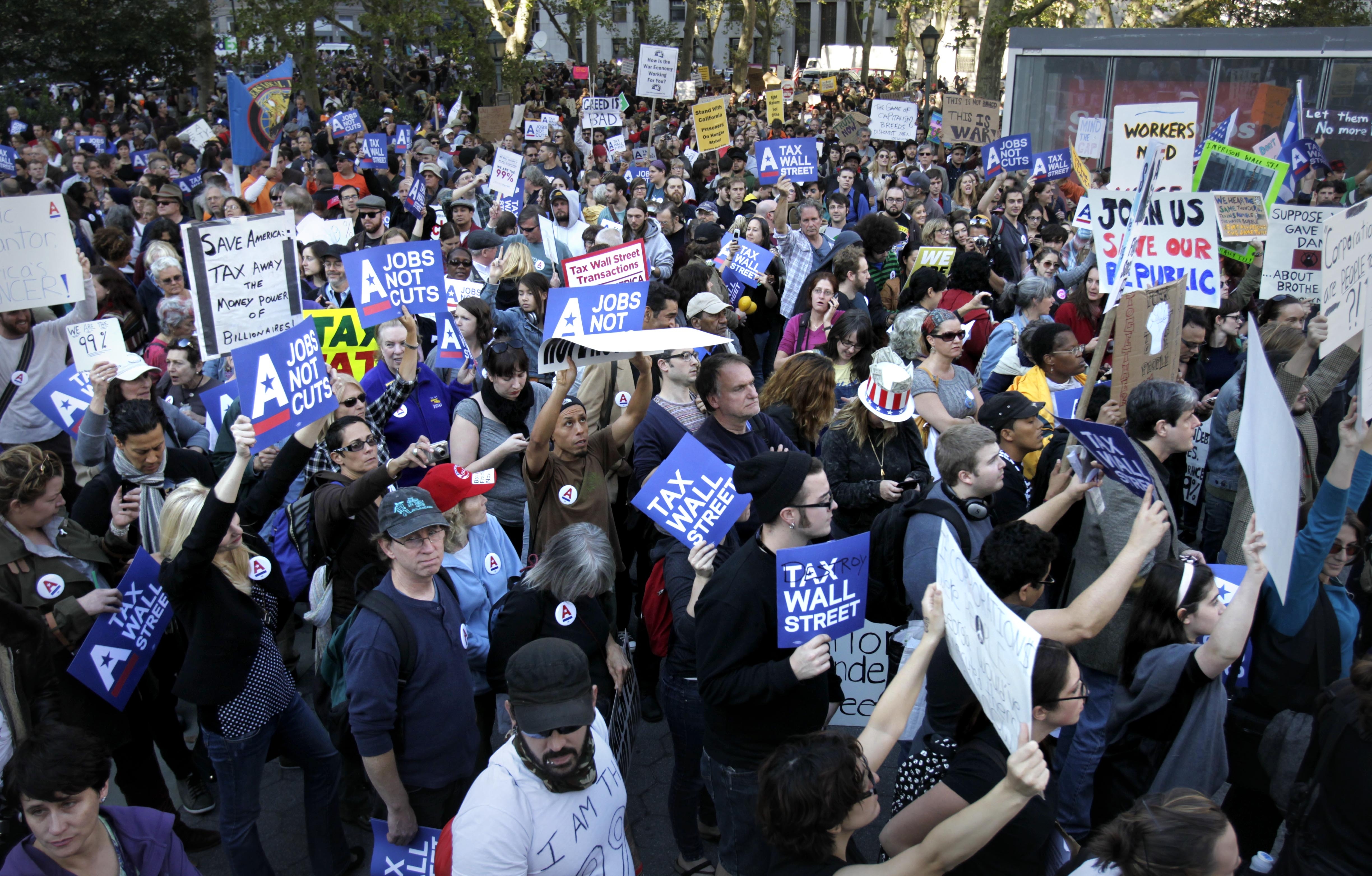 NEW YORK - Unions gave a high-profile boost to the long-running protest against Wall Street and economic inequality Wednesday, with their members joining thousands of protesters in a lower Manhattan march. Across the country, students at several colleges walked out of classes in solidarity.

People gathered at Foley Square, an area encircled by courthouses and named for "Big Tom" Foley, a former blacksmith's helper who became a prominent state Democratic leader. From there they marched to Zuccotti Park, the protesters' unofficial headquarters, where they refueled with snacks and hurriedly painted new signs as the strong scent of burning sage wafted through the plaza.

Competing drum circles went full speed on the north and south sides of the square as people continued to chant and march around the perimeter.

Susan Henoch, 63, of Manhattan said she was a "child of the `60s" and came out to the park for the first time Wednesday. She held a sign that read, "Enough."

"It's time for the people to speak up," she said. "Nobody's listening to us, nobody's representing us. Politics is dead.

"This is no longer a recognizable democracy. This is a disaster," she said.

Sterling W. Roberson, vice president for the United Federation of Teachers, said union members shared the same ideals as activists who have been camped out in sleeping bags for more than two weeks.

"The middle class is taking the burden but the wealthiest of our state and country are not," he said.

Thousands of protesters packed Foley Square, standing behind police barricades in front of the courthouse buildings. Some wore union T-shirts, others were in business attire, and many left work early to be there.

People in the crowd were carrying red-white-and-blue signs bearing a giant star-graced A -- representing the motto "Rebuild America." Other signs bore slogans including "Tax Wall Street" and "Make Jobs Not Cuts."

Some union members were there from other states.

Karen Higgins, a co-president of National Nurses United, came down with a group of colleagues from Boston. She said they had seen patients who skipped important medical tests because they couldn't afford them.

"Tax Wall Street," she said. "Those who make all the money need to start paying their fair share."

Roxanne Pauline, a coordinator for the Northeastern Pennsylvania Area Labor Federation, said some of her union's members plan to stay in Zuccotti Park over the weekend.

"They'll teach the younger people what unions are -- that they're not thugs or mobsters, but working people," she said.

The Occupy Wall Street protests started Sept. 17 with a few dozen demonstrators who tried to pitch tents in front of the New York Stock Exchange. Since then, hundreds have set up camp nearby in Zuccotti Park and have become increasingly organized, lining up medical aid and legal help and printing their own newspaper.

South African Adam Ash, who lives in New York City, has slept at the scene. He told CBS News that he and the protesters know they are channeling an anger that is worldwide. "We have a rallying cry - the anger with Wall Street, the economic inequality and greed. It's simple. When people say we don't have demands -- we do have a demand. We want to point out the massive inequality -- economic, social inequality."

Police said that United NY had sought a permit for the rally Wednesday and were expecting about 2,000. They were planning to use microphones at the square, but not at the park.

"I think they're capturing a feel of disempowerment, feeling like nobody is listening to them," said Camille Rivera, executive director of United NY. "What do you do when no one is listening to you? You speak up, you take action."

Hundreds of college students at New York's sprawling public university system walked out of classes Wednesday afternoon, some in a show of solidarity for the Wall Street movement but many more concerned with worries closer to home. Protests were scheduled at State University of New York campuses including Albany, Buffalo, Binghamton, New Paltz and Purchase.

Danielle Kingsbury, a 21-year-old senior from New Paltz, said she walked out of an American literature class to show support for some of her professors who she said have had their workloads increased because of budget cuts.

"The state of education in our country is ridiculous," said Kingsbury, who plans to teach. "The state doesn't care about it and we need to fight back about that."

Not every campus appeared to feel the rumblings of dissent Wednesday. At the University of Michigan in Ann Arbor, there were students publicizing breast cancer awareness and National Coming Out Week, students crawling on their elbows in an apparent fraternity hazing ritual, quarreling evangelicals and even a flash mob to promote physical fitness, but no sign of the Wall Street protests.

In New York, police department spokesman Paul Browne said that the department is prepared for a large group march Wednesday, and that officers were anticipating spillover onto the streets.

"Officers will be in the lane next to the sidewalk, and we will try to keep people on the sidewalk, but we realize they may need to walk on the street if it's crowded," he said.

The type of activity that could result in arrest would be if members of the group, say, purposefully try to stop traffic on Broadway, Browne said.

No one needs a permit to protest. Picket lines and marches go on nearly every day in New York. But a permit allows demonstrators to do things that would normally be illegal -- like filling an entire street. During the U.N. General Assembly, thousands of protesters took to the streets, but police were aware and facilitated and planned for traffic disruptions.

About 700 members of the Wall Street group were arrested and given disorderly conduct summonses for spilling into the roadway of the Brooklyn Bridge on Saturday despite warnings from police.

It's not clear whether the protesters meant it as civil disobedience; some say they were tricked by police into entering the road and were wrongly arrested. Police video shows officers with bullhorns telling them to keep off the road.

MoveOn.org was planning a "virtual march" on its website by encouraging people to post photos of themselves with the caption: "I'm the 99 percent" -- a reference to those people not among the wealthiest 1 percent of Americans and the debate over whether they should be taxed more. The group's executive director, Justin Ruben, called the protesters "brave young people" who have successfully inspired others to join them.

"From our perspective, we're protesting kind of the greed that led to the collapse of our economy," Ruben said. "The fact that these banks aren't paying their fair share."

Trevor Roulstin, 25, a cook from Durango, Colo., has been sleeping at the scene for eight days. He told CBS News that he is not a machine to create wealth for those in power. "Everyone has different grievances," he said, "but I would say what unites us is we see that this system and our government doesn't have our best interests at heart -- something has to change."

Brendan Burke, 41, a truck driver from Brooklyn, said that the protests represent a beginning of something. "It's not like 'get the king out of the castle. It's get the system out of my house.'"

Many of those who work on Wall Street say they don't take the protests personally. Indeed, some even sympathize.

"It's really incredible to me, the passion and conviction these people have," said Lou Crossin, who works for a company that sells corporate governance research to large investors. "I don't think these are violent people. They're just standing up for their beliefs."