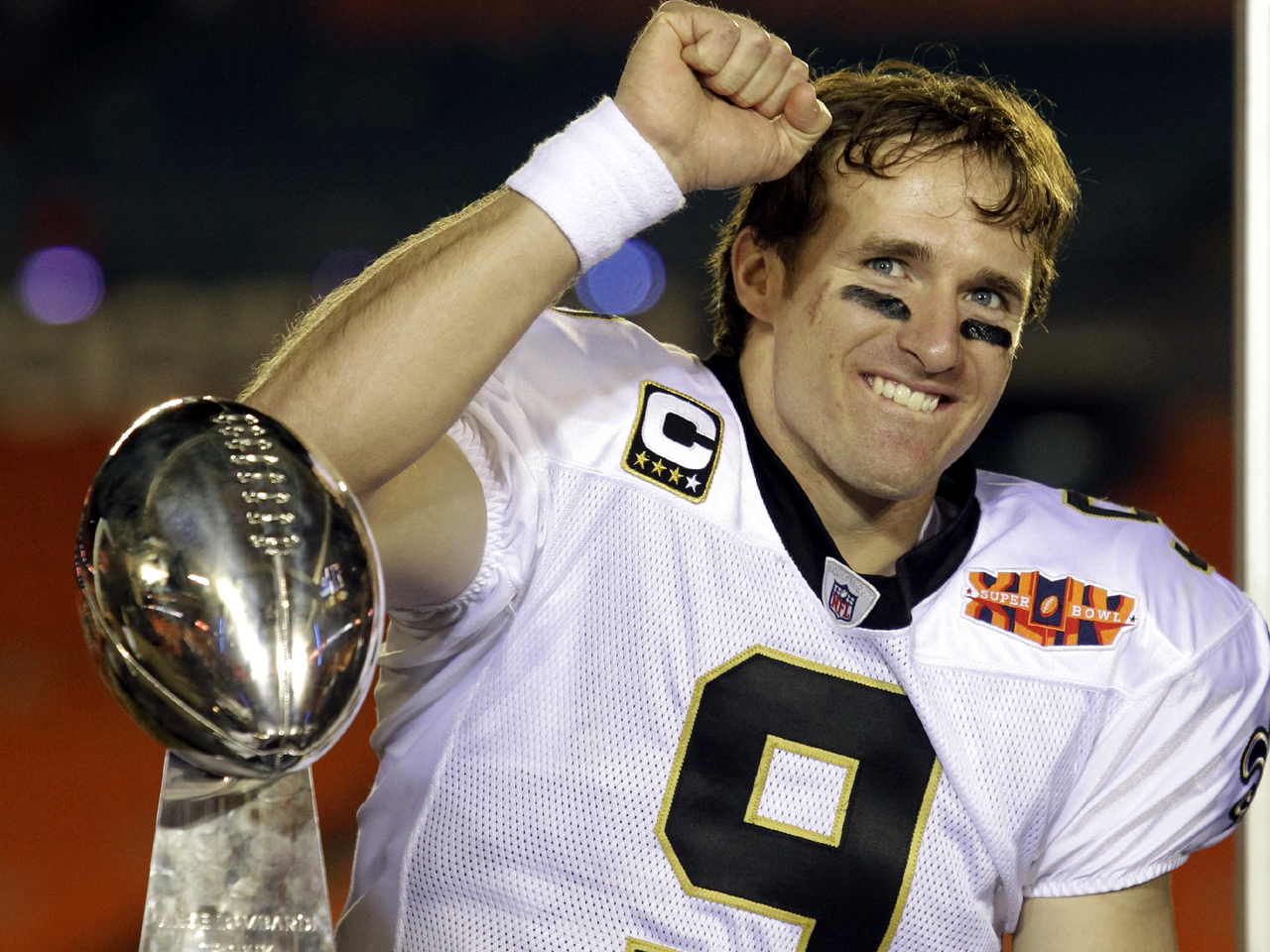 (The Nation) Quarterback/demigod Drew Brees is the reigning NFL Offensive Player of the Year. He also, for some curious reason, can't get a solid contract offer from his team, the New Orleans Saints. The sports radio talking heads are yipping about whether the 33-year-old Brees is asking for too much. But this story is not about the pay. It's the payback.

In fall 2010, it was Brees who led a procession onto the field in full view of the "Sunday Night Football" cameras with one finger in the air, a symbol that both teams -- the Saints and Vikings -- were actually one team united against ownership. The voice of the NFL establishment, Al Michaels, a proud political conservative, condemned it from the NBC booth, saying-with an eye roll, "There's nothing like a labor statement to start the season." As for the NFL owners, like the elephant who symbolizes their political affection, they don't forget. But Brees proceeded without concern for any kind of payback. After all, he brought a Super Bowl victory to New Orleans. He was untouchable. As the team's union representative and member of the NFLPA executive board, Brees remained outspoken and was one of the lead plaintiffs in the lockout-lawsuits against the NFL. His former teammate Scott Fujita said to me, "In recent years Drew has taken some strong positions against league management. He doesn't have to do this, but he chooses to because he knows it's the right thing to do, and because he's a natural leader who all players look to and respect. That's quite rare for someone of his stature. He has great conviction."

But conviction comes with a price, even for -- as one union official described him to me -- "the Captain America of quarterbacks." The NFLPA has now formally requested the league to investigate whether the Saints are openly trying to punish Brees for his trade unionism. The union is citing CBA provision, Article 49, Section 1 which reads, "No Discrimination: There shall be no discrimination in any form against any player by the NFL, the Management Council, any Club or by the NFLPA because of race, religion, national origin, sexual orientation, or activity or lack of activity on behalf of the NFLPA."

Brees's other apostasy has been to defend current and former teammates Will Smith, Anthony Hargrove, Jonathan Vilma, and Fujita on charges that they were part of a pay-to-injure program, otherwise known as "bountygate." Brees is leveraging his fame to argue that he and his team are being targeted for the crime of being loud and proud union leaders during last year's NFL lockout.

There was a media backlash against Brees for invoking the war in Iraq (or the lies that brought us into the war in Iraq, to be more exact.) Brees apologized for this tweet but this mini-backlash didn't slow him down and actually seemed to embolden him.

On The David Letterman Show, Brees said, "I mean, just the whole process itself and the investigation I feel like has been extremely unfair. Unfortunately, it seems like it's been more of a media campaign than it is actually finding the truth to the matter. Put forth the facts, the truth, and if indeed there was a pay-to-injure scheme, then people will get punished, and if there's not, then let's exonerate these men because, at this point, it seems like it's a smear campaign. We're dragging them through the mud. We're ruining their reputations and careers with no true evidence."

There are those who will scoff about Brees, the millionaire quarterback, being any kind of trade union martyr. They are already saying that the NFLPA has no place in this "negotiation." The scoffers will have television programs, radio shows, and nationally read columns. They are the creators of conventional wisdom. They are also wrong.

There is no higher cultural platform in the country than the National Football League. NBC's "Sunday Night Football" is the highest rated program of the fall season. The Super Bowl is the most watched program in the history of this country. Drew Brees has been one of the faces of this league since the Saints won the Super Bowl in 2010. If he can be spanked like an unruly child for the crime of standing with his union, what does that portend for the public sector worker in Ohio, the Chicago teacher who just voted to go on strike, or the Starbucks barista trying to start a union? I'm not saying that Drew Brees is some kind of Joe Hill with a tight spiral, but this is about ensuring that anyone who wants a union or is in a union can speak out in defense of their livelihood.

Named one of UTNE Reader's "50 Visionaries Who Are Changing Our World," Dave Zirin is the sports editor for The Nation magazine. The opinions expressed in this commentary are solely those of the author.

The AFL-CIO, of which the NFLPA is a member, should put out a statement in support of Brees. They should hold his case up as an example of what NFLPA Executive Director DeMaurice Smith means when he says, "The minute that any sports player believes for whatever reason that they are outside the management-labor paradigm, you lose ground." This country's trade union movement has been in free fall for decades, from a high of 35% in the mid 1950s, to a 70 year low in 2010 of fewer than 12%. If the message from the NFL is that being an active unionist is grounds for intimidation and punishment, then the AFL-CIO needs to make it plain: An injury to one is an injury to all. Even quarterbacks.

Named one of UTNE Reader's "50 Visionaries Who Are Changing Our World," Dave Zirin is the sports editor for The Nation magazine. The opinions expressed in this commentary are solely those of the author.