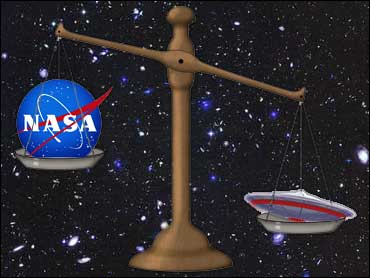 Phoenix residents and local media were buzzing Tuesday about whether the city had experienced a close encounter of the first kind.

Red colored lights that formed a square and then a triangle were seen floating over north Phoenix late Monday, a sight reminiscent of an unexplained 1997 sighting that has become part of the area's lore.

There was no immediate word where they came from.

The Air Force said the lights weren't from any of their flight operations and officials at Deer Valley airport and Phoenix Sky Harbor International Airport could not explain it.

The lights were visible for about 13 minutes around 8 p.m. Monday.

A Luke Air Force Base official said the base wasn't flying any aircraft in the sky Monday night and that the lights are not part of any Air Force activities.

Officials with the Marine Corps Air Station in Yuma and Arizona National Guard also said their agencies had not been conducting any air operations.

A spokesman for the North American Aerospace Defense Command, which monitors information on missiles or other manmade objects re-entering the atmosphere, said the agency received no reports of activity in the region.

Airport officials said the lights were not from any aircraft at that airport.

Ian Gregor, a spokesman for the Federal Aviation Administration, said that air traffic controllers at Sky Harbor also witnessed the lights, but do not know the cause.

The incident was reminiscent of one that occurred on the night of March 13, 1997. That night thousands of people reported seeing a mile-wide, v-shaped formation of lights over the Phoenix area.

They were widely explained as flares dumped by a military training flight, though many still doubted the government was telling all it knew.

Tucson astronomer and retired Air Force pilot James McGaha said he investigated two sightings over Phoenix that March night and traced both to A-10 aircraft flying in formation at high altitude.

Dozens of listeners called a local radio station in Phoenix just after 8 p.m. Monday reporting they were watching the four mystery lights.

"From my position, it looked like they were just hanging, not moving at all," said one caller.

A woman caller said, "It looked like four red tower lights, but it was pretty high up in the air. I called my husband and he said, 'Get home, what's wrong with you?'"

A man in north Phoenix told CBS News affiliate KPHO in Phoenix: "They were about 3,000 feet high, approximately. They looked as though they were kind of hovering or floating from west to east, very slowly. They were up there for 15 or 20 minutes."