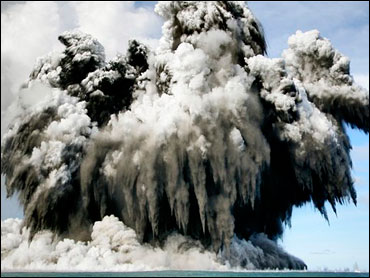 Scientists sailed Thursday to inspect an undersea volcano that has been erupting for days near Tonga - shooting smoke, steam and ash thousands of feet into the sky above the South Pacific ocean.

Authorities said Thursday the eruption does not pose any danger to islanders at this stage, and there have been no reports of fish or other animals being affected.

Spectacular columns are spewing out of the sea about 6 miles from the southwest coast off the main island of Tongatapu - an area where up to 36 undersea volcanoes are clustered, geologists said.

Trade winds continued to blow gas and steam away from the island Thursday.

Tonga's police deputy commander Taniela Faletau said coastal villages close to the roiling ocean site were not yet at risk and that no warnings had been issued.

Police were waiting for a government team of officials and scientists to survey the area and report on their observations before taking any action.

Coastal residents said the steam and ash column first appeared on Monday morning, after a series of sharp earthquakes were felt in the capital, Nuku'alofa.

"This is not unusual for this area and we expect this to happen here at any time," said Keleti Mafi, Tonga's geological service head. 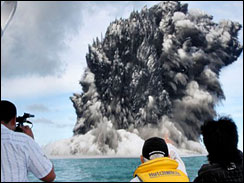 (AP Photo/Shizuo Kambayashi)
The underwater eruption was taking place near the low-lying twin volcanic islands of Hunga Tonga and Hunga Ha'apai, and within sight of the capital, Nuku'alofa.

Large amounts of pumice thrown up by the erupting volcano would likely clog beaches on the southern coast of nearby Fiji islands within a short time, Mafi said.

Tonga, a 170-island archipelago about halfway between Australia and Tahiti, is part of the Pacific "ring of fire" - an arc of earthquake and volcanic zones stretching from Chile in South America through Alaska and down through Vanuatu to Tonga.