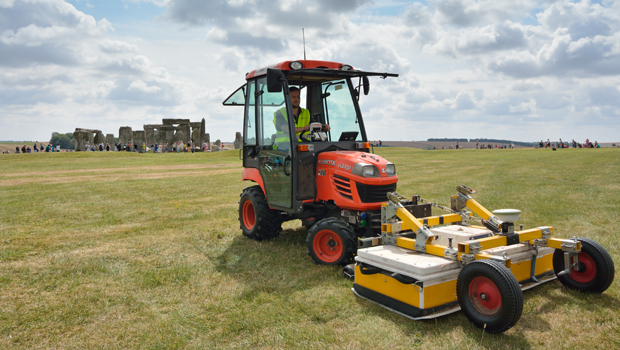 With Mark Phillips this morning we'll take a walk among the Stonehenge stones:

At Stonehenge, it's always been about the Sun. For more than 4,000 years, the monument has stood like a giant sundial, marking the longest day of the year, and the shortest -- taking aim at the Sun like a giant stone gunsight.

Yet, Stonehenge is also about mystery. The big stone circle is only the most obvious part of the site. Lesser monuments -- some much older, and most of them buried under the soil now -- stretch for miles across the landscape.


And they're being looked at in a way that's never been possible before, using high definition, ground-penetrating radar and other magnetic- and resistance-sensitive survey equipment in what's being called the Hidden Landscapes Project.

A documentary team from the Smithsonian Channel has been following the archaeologists around; and -- using computer generated imagery -- it's been digitally reconstructing some of the monuments that have long since disappeared, like a burial chamber built of wooden posts, with timbered walls and covered with earth. It predates Stonehenge by centuries, and would have held the remains of around 50 bodies.

Henry Chapman, an archaeologist from the University of Birmingham, England, says the project has produced more data than they know what to do with.

"It's sort of the sweet shop problem," Chapman said. "That's when you're presented with loads of information, [so you] think, 'I want some more now!'"

The new data has helped answer some old questions, like whether the giant stone circle -- now somewhat gap-toothed -- was ever complete. The digital probing and some dry patches that emerged during a recent drought seem to show that Stonehenge was once, in fact, a full circle.

Mark Bowden, of English Heritage, said the data revealed a series of parch marks, "which showed us the positions of some stones which we'd never seen before at Stonehenge."

Chapman said, "In many ways, I think we've had almost a false understanding of Stonehenge . . . because we haven't been able to see the whole picture."

The new imagery shows what they call the Greater Cursus, running like a huge ditch and mound in a massive loop across the countryside. Archeologists had known it was there, but were never sure what it contained or what it was for.

The new gizmos have revealed details never previously seen in the hundreds of years Stonehenge has been studied.

There were great pits and structures along its route, and all of them seem built in relation to the passage of the Sun across the sky.

In fact, the ends of the Cursus themselves line up with the main monument and the Sun at the winter and summer solstice.

"These were extremely primitive Stone Age cultures, yet they seem to have figured out the Sun thing," said Phillips.

"Yeah, well, it's weird," said Chapman. "I actually don't think we can see them as that primitive. I mean, they're farmers. Of course they're gonna be understanding when summer is, when winter is. They're relying on that in terms of their farming cycle, And actually their ability to measure that and to be able to see different times of year is actually quite useful."

It is a big clock -- a REALLY big clock, and maybe the world's most famous one. It draws millions of visitors, including President Obama when he dropped by last year.

It's the size of the stones that impresses . . . that and the fact the big upright ones were somehow brought to this place from more than 30 miles away, and some of the smaller ones brought from much further -- and all of that before the builders had use of the wheel.

Stonehenge archeologist and historian Susan Greaney spends a lot of the time answering the one question that always comes up: How did they do it?

"Stonehenge is unique," Greaney said. "There's nothing like it in the entire world. There's no other lintel stone circle. When I say lintel, I mean the horizontal stones on top of the other stones. So it tells us a huge amount about the sophistication of our prehistoric ancestors."

Whatever its technical wonders, Stonehenge is also a spiritual place. Some of the findings suggest ancient rituals (including possibly human sacrifice) may have been carried out here.

Legends persist that the place was a ceremonial ground for Druids, despite the fact there is no evidence the mystical cult that existed around 2,000 years ago was ever here. That hasn't stopped modern-day devotees from coming back.

Although the modern surveyors have discovered evidence of other activity: little semi-combustable pieces, dating from festivals held on this landscape in the 1980s. "They even found the latrine just in this area," said Chapman.

What they haven't found, though, is meaning. No machine can do that.

There's elements to do with solar/lunar alignments, with marking time. It's almost certainly a temple. But it also has all these other sort of functions.

"So when we start saying, 'What's the meaning of Stonehenge?' I think probably, how many reasons do you need?" laughed Chapman.

The technical survey has increased the appetite for more traditional archeological study. Until you dig, you don't really know what's there. And now they have so many more places to dig.

And so, said Phillips, "The mystery lives on."

"Absolutely," said Chapman. "And long may it live on!"

This week on "Sunday Morning" (May 8)
Thanks for reading CBS NEWS.
Create your free account or log in
for more features.
View CBS News In
CBS News App Open
Chrome Safari Continue
Be the first to know
Get browser notifications for breaking news, live events, and exclusive reporting.