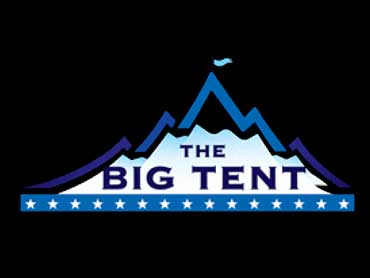 Whoever takes the White House in 2008 can thank Google for helping. The search giant will be at both conventions, encouraging delegates to use YouTube and other Google services to share their impressions of the proceedings.

At the Democratic convention, Google will also be one of the sponsors of "The Big Tent," an 8,000-square-foot, two-story structure where bloggers and other new media journalists can watch and cover the convention and question party dignitaries who will speak from the "Digg Stage."

The tent will accommodate citizen journalists who might not be able to get credentialed by the party to work out of the nearby Pepsi Center, where the convention is taking place.

In addition to work space, the tent will provide food, beverages and massages, as well as workshops on blogging, video and other technologies.

Google also will have people at the convention helping delegates, bloggers and reporters upload video, photographs and blog postings. (Naturally, they will encourage people to use Google properties including YouTube, Blogger.com and the Picasa photo service.)

This isn't the first time people have blogged a convention. In 2004, both parties credentialed some bloggers as journalists. But these are the first conventions since the advent of YouTube.

Google, which owns YouTube, will set up kiosks at the conventions where delegates can give their impressions of what's happening. Also, YouTube expects to Webcast all of the speeches, not just the ones that make prime-time network broadcasts. Because YouTube and other video sites can archive footage forever, there will be an enduring record of what goes on that will be available almost immediately after each speech.

Having covered past conventions, I remember seeing dignitaries and party activists delivering speeches in the afternoon with no network TV coverage and very few delegates listening. Now it's possible for speakers to have perpetual bragging rights by posting links to their convention speeches on their Web sites.

Obscure speeches will not be the only ones that will go online. Interested people who won't be sitting in front of their TVs during prime-time coverage can later watch major speeches or convention video, such as profiles of the candidates.

"At previous conventions, the parties and candidates would hope that the video would be shown to the television audience, and if you were at home watching you might see it," said Andrew Rasiej, co-founder of TechPresident.com. "But if you didn't catch the video about John Kerry in 2004, your ability to see that video was pretty much lost." Rasiej called services like YouTube "the TiVo of our society."

In addition to what happens on the convention floor, numerous activities will take place outside the halls, including parties and protest rallies. Except when rallies turn disruptive, they are generally ignored by the media and delegates. But now that virtually everyone has a camera or camcorder on their cell phone, when something happens there's a good chance it will be memorialized and posted on the Web.

Personally, I'm excited about the expanded coverage afforded by bloggers and audio and video podcasters. I think the big TV networks will play the important role of bringing the big speeches to our homes during prime time and the cable networks will do their best to provide the usual array of perspective from their talking-head analysts. But the blogosphere and video sites will provide views and perspectives that people - especially political junkies - would otherwise miss.

I think new media makes up for what big media companies no longer cover. That's not true of all of journalism - bloggers don't have the resources, for example, to adequately cover wars and other important international events. But the blogosphere can do an excellent job in bringing us news and perspective of what happens in Denver and Minneapolis-St. Paul.

And of course, big media companies will also use the Web to expand their coverage. CBS News anchor Katie Couric, for example, will host a live Webcast at 11:00 each night that will address questions submitted here, and (as has been the case for quite a while) CBS and other network Web sites will archive portions of their TV coverage as well as Web-only footage so people can access it when and where they want.
By Larry Magid