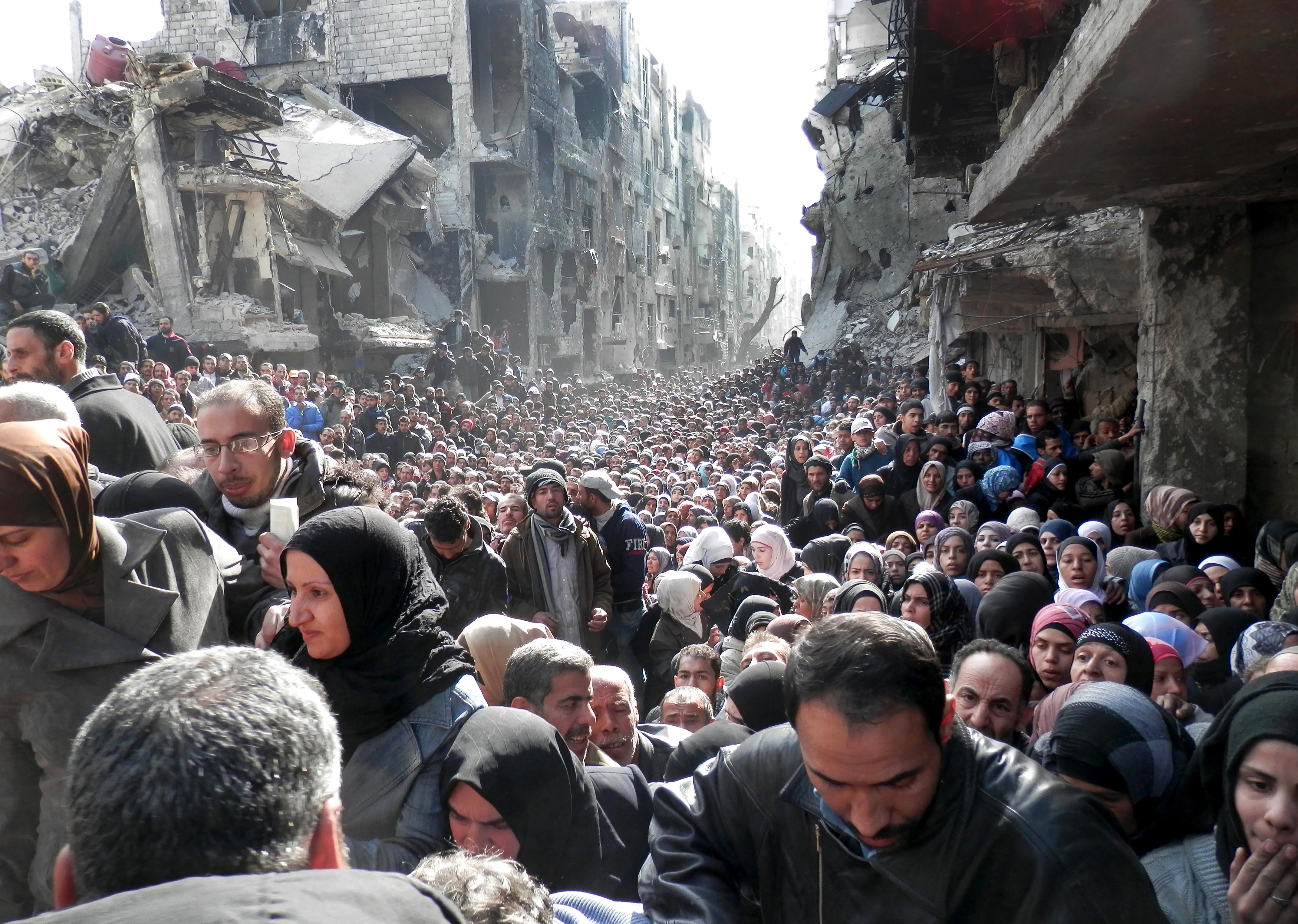 BEIRUT -- A United Nations official called Wednesday on warring sides in Syria to allow aid workers to resume distribution of food and medicine in a besieged Palestinian district of Damascus.

Chris Gunness, spokesman for the UNRWA relief agency, called on both the forces loyal to President Bashar Assad and the rebels fighting to oust him to facilitate "safe and unhindered humanitarian access" to thousands of trapped civilians in Yarmouk camp.

The call came as U.N. Secretary General Ban Ki-moon urged the Syrian government to authorize more humanitarian staff to work inside the country, devastated by its 3-year-old conflict.

Yarmouk has seen some of the worst fighting in the capital, leading to severe food shortages and widespread hunger.

UNRWA renewed its pleas for Yarmouk after the agency's chief made a rare visit to the beleaguered camp on Monday.

Filippo Grandi, the Commissioner General of UNRWA, said Tuesday that the extent of damage to the refugees' homes in Yarmouk was shocking.

"The devastation is unbelievable. There is not one single building that I have seen that is not an empty shell by now," he said in neighboring Beirut.

The state of those still in the camp was even more shocking.

"It's like the appearance of ghosts," he said of the people coming from within Yarmouk near a distribution point he was allowed to reach.

"These are people that have not been out of there, that have been trapped in there not only without food, medicines, clean water -- all the basics -- but also probably completely subjected to fear because there was fierce fighting."

Grandi welcomed last week's U.N. Security Council resolution calling for immediate access for humanitarian aid to all areas of Syria. He said that the resolution, unanimously adopted by the Security Council, "gives us a tool to argue in favor of access that is stronger than any other tool we've ever had before in Syria."

He said it's too early to say what effect the resolution has had on the ground, but that "everybody has to comply." Both sides have hindered access in the past, he added.

UNRWA shipments to Yarmouk were cut for months, leaving residents to suffer from crippling shortages of food and medicine. Since last month, small shipments resumed, although they remain intermittent.

More than 100 people have died in in the area since mid-2013 as a result of starvation and illnesses exacerbated by hunger or lack of medical aid, according to U.N. figures.

Yarmouk, located in southern Damascus, is the largest of nine Palestinian camps in Syria. Since the camp's creation in 1957, it has evolved into a densely populated residential district just five miles from the center of Damascus. Several generations of Palestinian refugees have lived there.

Grandi said around 18,000 of the camp's original 160,000 Palestinian refugees are still inside Yarmouk.

The most vulnerable Syrian refugees in neighboring countries are also at risk of hunger and sickness, said the U.N.