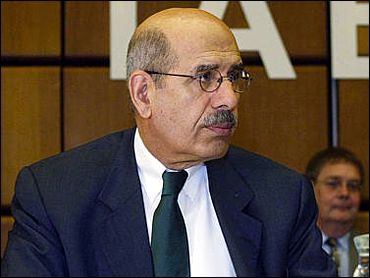 Key members of the U.N. nuclear watchdog agency reappointed Mohammed ElBaradei for a third term as head of the organization Monday after the Bush administration last week publicly dropped its opposition to him.

Washington had accused ElBaradei of being too mild on Iran and of trying to obstruct the invasion of Iraq by questioning U.S intelligence that asserted Saddam Hussein had a nuclear arms program.

Still, consensus approval of ElBaradei as director general of the International Atomic Energy Agency as delayed for several hours because of arguments over procedure.

The dispute surfaced after the Japanese chief delegate, Yukio Takasu, opposed making the reappointment the first item of the conference on what he said were procedural grounds. It was not immediately clear why Japan made the move.

Egypt was a key backer of having ElBaradei's reconfirmation as the first order of the day at the Vienna meeting, and that gave rise to speculation Japan was retaliating for Cairo's role in obstructing the adoption of an agenda for more than two weeks at last month's conference on nuclear proliferation in New York.

But Jun Miura, a foreign ministry official in Tokyo, said the Japanese envoy's actions were aimed only at "making the meeting proceed smoothly" and denied suggestions of Japan retaliation. "That is completely false," Miura said, when asked about the speculation.

On the IAEA's upcoming agenda item of Iran, diplomats said the Islamic republic will be mildly criticized for not fully cooperating of an IAEA investigation of its activities. But they said Tehran also will come in for some praise, with a senior IAEA official planning to tell the agency's board that the country has kept its promise of freezing a key program that could be used to make nuclear arms.

The diplomats described the report on Iran — likely to be delivered Tuesday or Wednesday by IAEA Deputy Director General Pierre Goldschmidt — as relatively mild, compared with previous summaries since Tehran's nuclear program became a matter of international concern three years ago.

Tehran has been under agency review since revelations in 2003 of nearly two decades of secret nuclear activities, including work on enriching uranium — a technology that can make weapons-grade material for nuclear warheads. Iran insists it wants to enrich only to generate nuclear power, but froze that program and linked activities late last year as it focused on talks with France, Britain and Germany meant to reduce concerns about Tehran's nuclear ambitions.

The meeting also will urge North Korea, the other key international proliferation concern, to return to six-nation talks meant to entice it to move away from nuclear threats in exchange for economic and political concessions, the diplomats said.

Ahead of the start of the meeting, South Korean President Roh Moo-hyun said he was certain international nuclear talks with North Korea would resume and called for more flexibility in offering incentives to convince Pyongyang to disarm.

Saudi Arabia is a relatively recent issue for the agency.

The country has negotiated a now-outmoded deal with the IAEA that effectively excludes it from nuclear inspections in exchange for its word of honor that it does not have anything worth inspecting. After formal requests from the European Union, the United States and Australia to agree to an outside probe by agency inspectors, the Saudis will be under pressure to show some compromise at the board meeting, said the diplomats.

In Riyadh Sunday, the Saudi news agency cited an unnamed official as saying Saudi Arabia is willing to cooperate with the U.N. nuclear monitoring agency. But the Saudi official didn't mention inspection in his remarks.