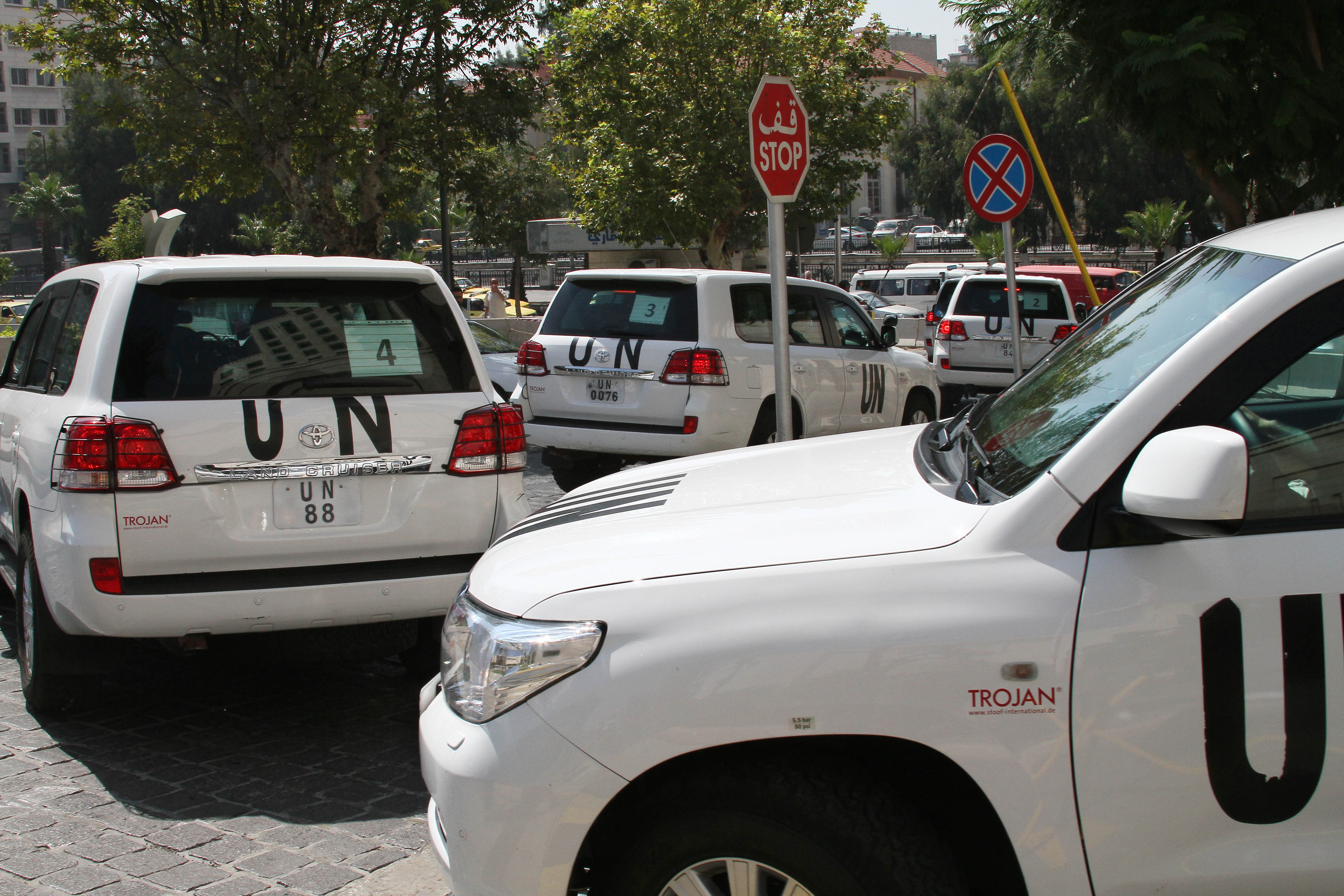 DAMASCUS, Syria Snipers opened fire Monday at a U.N. vehicle carrying a team investigating the alleged use of chemical weapons in Damascus, a U.N. spokesman said. The Syrian government accused the rebels of firing at the team, while a rebel representative said a pro-government militia was behind the attack.

Activists said the team later arrived in Moadamiyeh, a western suburb of the capital and one of the areas where last week's attack allegedly occurred. They said the team met with doctors and victims at a makeshift hospital. A witness later told Reuters that they returned to their hotel after completing the visit.

The United States has said that there is little doubt that President Bashar Assad's regime was responsible for the attack on Aug. 21 in the capital's suburbs. Activists say the action killed hundreds; the group Doctors Without Borders put the death toll at 355 people.

Monday's shooting came as support for an international military response was mounting if it is confirmed that Assad's troops used chemical weapons.

Martin Nesirky, spokesman for U.N. Secretary-General Ban Ki-moon, said the U.N. vehicle was "deliberately shot at multiple times" in the buffer zone area between rebel- and government-controlled territory, adding that the team was safe.

News of the sniper attack came only a few hours after an Associated Press photographer saw the team members wearing body armor leaving their hotel in Damascus in seven SUVs and heading to the site of the alleged attack.

The photographer said U.N. disarmament chief Angela Kane saw them off as they left but did not go with them.

Nearly an hour before the team left, several mortar shells fell about 700 yards from their hotel, wounding three people. One of the shells struck a mosque and damaged its minaret, according to an AP reporter on the scene.

U.S. Defense Secretary Chuck Hagel, speaking with reporters after meeting with his Indonesian counterpart, said Monday the Obama administration was studying intelligence on Syria's purported use of chemical weapons and "will get the facts" before acting.

Hagel said Obama "is considering all different options" and that "if there is any action taken it will be in concert with the international community and within the framework of a legal justification."

Nesirky said one of the cars used by the team was "no longer serviceable" after the shooting, forcing the team to return to a government checkpoint to replace the vehicle.

"It has to be stressed again that all sides need to extend their cooperation so that the Team can safely carry out their important work," he said in emailed comments to The Associated Press.

The Syrian government said the U.N. team was subjected to fire by "terrorist gangs" while entering Moadamiyeh.

The government also says Syrian forces provided security for the team until they reached a position controlled by the rebels, where the government claimed the sniper attack occurred.

"The Syrian government holds the terrorist gangs responsible for the safety of the United Nations team," said the government statement broadcast on Syrian TV. The Syrian regime routinely refers to rebels fighting to topple Assad as terrorists.

Wassim al-Ahmad, a member of the Moadamiyeh local council, said five U.N. investigators eventually arrived at a makeshift hospital in the suburb, where doctors and about 100 people still with symptoms from the alleged chemical attack were brought in to meet with the U.N. team.

"They are late, they came six days late," he told AP via Skype from Moadamiyeh, referring to the time it took the U.N. team to arrive. "All the people have already been buried."

He also claimed that members of a pro-government militia known as the Popular Committees fired at the U.N. team.

The eastern suburbs of Damascus have also witnessed a wide army offensive over the last week, but have been relatively quiet since Sunday night, said the U.K.-based Syrian Observatory for Human Rights, which tracks the fighting in Syria.

Mohammed Abdullah, an activist in the eastern suburb of Saqba, said the U.N. is also expected to visit that rebel-held area on Monday and will be under the protection of the Islam Brigade, which has thousands of fighters in the area.

Syrian activists and opposition leaders have said that between 322 and 1,300 people were killed in the alleged chemical attack in the capital's western suburbs.

Syria said Sunday that a U.N. team would be allowed to investigate the site, but a senior White House official dismissed the deal as "too late to be credible."

Speaking to reporters in the South Korean capital of Seoul, U.N. chief Ban Ki-Moon said about the investigation that "every hour counts. We cannot afford any more delays."

"If proven, any use of chemical weapons by anyone under any circumstances is a serious violation of international law and an outrageous crime. We cannot allow impunity in what appears to be a grave crime against humanity," Ban said.

As the U.N. inspectors left their hotel, Syrian President Bashar Assad renewed his rejection of claims that his troops used chemical weapons the Ghouta attack, calling them "nonsense" in an interview with Russian newspaper Izvestia.

"This is nonsense," Assad was quoted as saying in an interview published Monday. "First they level the accusations, and only then they start collecting evidence."

Assad said that attacking such an area with chemical weapons would not make sense for the government as there was no clear front line between regime and rebel forces.

"How can the government use chemical weapons, or any other weapons of mass destruction, in an area where its troops are situated?" he asked.

With France, Britain, Israel and some U.S. congressmen urging swift military action against Assad's regime if the use of chemical agents is confirmed, the U.N. team's conclusions could have a dramatic impact on the trajectory of the country's civil war.

French Foreign Minister Laurent Fabius said no decision had been made on a military intervention but that any response would be "proportionate."

"It will be negotiated in coming days," Fabius told Europe 1 radio on Monday. He said that the lack of a U.N. blessing was problematic, but that all options remain on the table.

"The only option that I can't imagine would be to do nothing," Fabius said.

Britain's Foreign Secretary William Hague said diplomatic pressure has not worked on Syria's government, adding that a response was still possible without complete unity in the U.N. Security Council.

Also Monday, the German government suggested for the first time that it would support an international military response if it is confirmed that Assad's troops attacked opponents with chemical weapons.

Chancellor Angela Merkel's spokesman Steffen Seibert said Monday that if U.N. inspectors confirm the use of chemical weapons, "it must be punished."

Turkish Foreign Minister Ahmet Davutoglu said Turkey would take part in an international coalition against Assad if the U.N. failed to come up with sanctions to punish Syria for the alleged use of chemical weapons. Turkey has been one of Assad's harshest critics.

"They can start a war but they will not know where it will spread or how it will end," Assad said. "Superpowers can launch wars but they cannot win them."

Asked what the US. would face in any intervention, Assad answered: "What it suffered in all its wars from Vietnam until now. Failure."

In Syria, rebels captured on Monday the central town of Khanaser, cutting a major road that links the central province of Hama with the northern province of Aleppo, the Observatory and the Aleppo Media Center reported. The road was used to supply Aleppo with food as well as weapons.

The Observatory also reported that rebels bombarded a military academy in the central city of Homs Sunday night, killing three cadets and wounding more than 50.