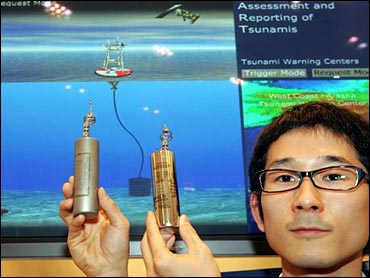 India plans a tsunami-warning system that its neighbors could join, while Indonesia envisions one run by southeast Asian countries. The Germans are pitching their own high-tech network, but the United Nations says it should set up the system - and then extend it globally.

The Asian tsunami disaster demonstrated with terrifying power the need for an alert system in the Indian Ocean and other parts of the world, but the outpouring of support to build one has generated a plethora of overlapping proposals.

Amid the confusion, U.N. officials at the World Conference on Disaster Reduction in Kobe, Japan, called on Wednesday for coordination of efforts - and insisted on their own central role in marshaling the expertise and setting up the system.

"The event was of such magnitude that we have seen forthcoming some very interesting and very complete proposals," said Patricio Bernal, executive secretary of the U.N.'s Intergovernmental Oceanographic Commission, which coordinates a warning system in the Pacific.

But, he said, "we feel we need to provide the common platform."

The conference, which was refocused to concentrate on tsunami after the Dec. 26 Asian tragedy killed more than 160,000 people, has set its top priority as the construction of an early warning system for ravaged nations in the Indian Ocean.

The model for the new network is an existing system in the Pacific, which was established in 1965 and now provides early tsunami warnings to 26 nations. Experts say much of the technology - from earthquake and sea level sensors to messaging systems - could be easily transferred to southern Asia.

The key, experts said, is organizing Indian Ocean nations so that they are able to transmit alerts to coastal communities and share information among themselves quickly. Scientists will face the complex tasks of gauging tsunami risks along varied coastlines and other assessments of hazard. Countries also need evacuation plans and other measures to mitigate tsunami damage.

Still, officials are confident they could put together a functioning system in southern Asia by the middle of next year. The U.N. Educational, Scientific and Cultural Organization, which runs the IOC, has already proposed such a network in the Indian Ocean that would cost $30 million, with the ambitious goal of extending it worldwide by mid-2007.

But first, the United Nations will have to sort through the differing ideas about what should be done. UNESCO plans two meetings in Paris, the first in early March, to put all the proposals on the table, find common ground and work toward a single course of action.

"I would like to propose that we go about establishing this system in a coordinated way," said UNESCO Director-General Koichiro Matsuura.

In a three-hour session Wednesday, weather experts, seismologists and oceanographers from around the world discussed the lessons learned from 40 years of operating the Pacific Ocean system and gave broad outlines of what a network in southern Asia could look like.

The ideas were varied.

K. Radhakrishan, director of India's National Center for Ocean Information Services, said his country has the technological capability to build a broad network that would stretch from Australia to eastern Africa by September 2007, for $30 million.

"India has a road map," he declared.

Indonesia, meanwhile, wants to expand its quake and tsunami monitoring centers as part of its national protection plan, and suggested a quake information center run by the Association of Southeast Asian Nations could be retooled to focus on tsunami.

Even distant Germany has come forth with a warning system for part the region, though Bernal of the IOC said the plan was "ambitious" because it appeared to require technological advances to implement.

U.N. officials and other experts said different levels of systems were needed for different types of threats. Coastal areas near the epicenters of tsunami-generating earthquakes, for example, would have very little time to react to the impending danger and would rely on breakwaters, seawalls and resident awareness of the warning signs to avert disaster.

There are also differing plans on what to do outside of Asia. The United States last week unveiled a $37.5 million plan to build a warning system designed to protect both the Pacific and Atlantic coasts by mid-2007. The plan would boost the size of the network in the Pacific, while erecting similar safeguards for the Atlantic, Caribbean and Gulf coasts.