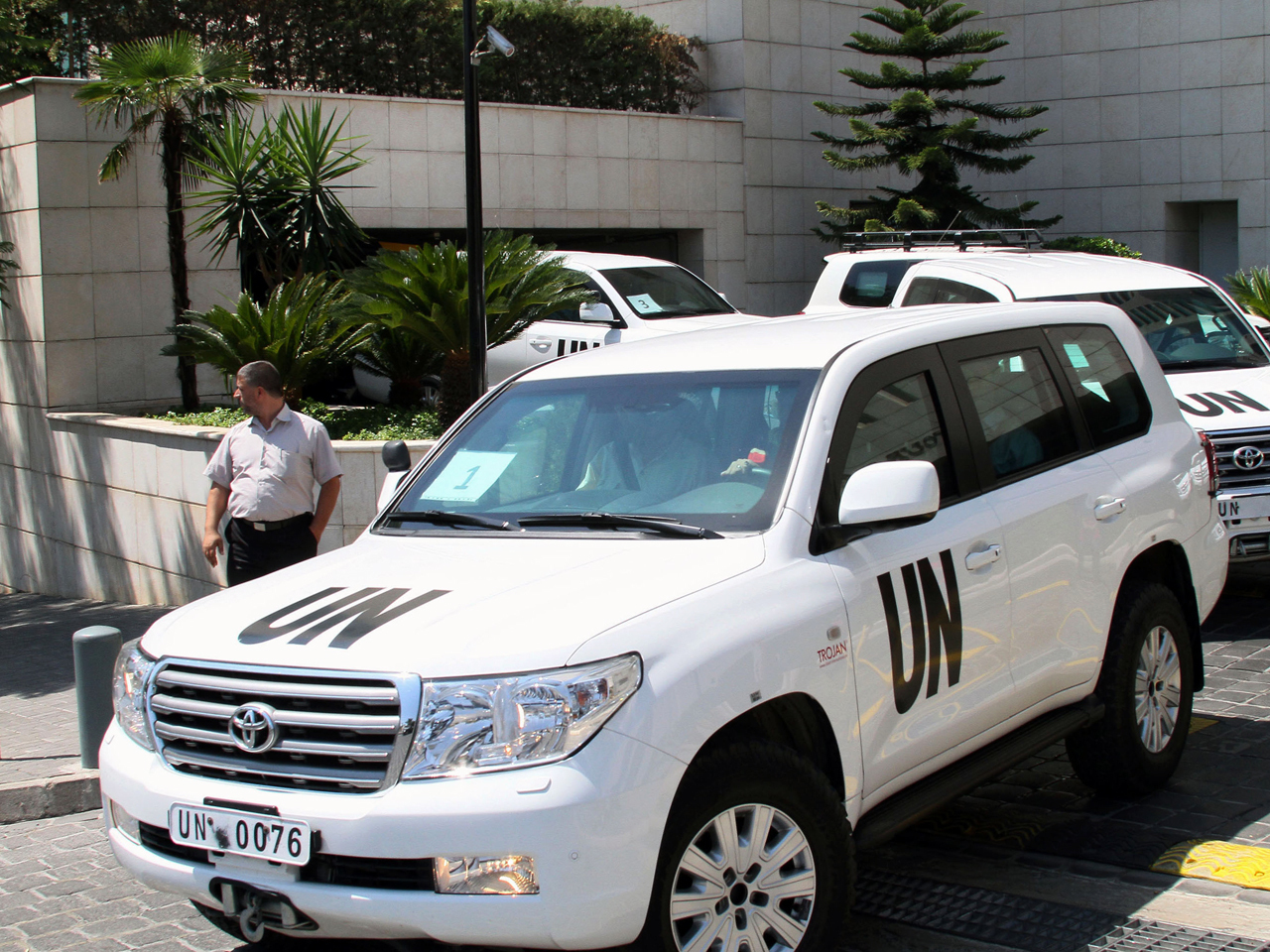 The team on Friday carried out a fourth and final day of inspection as they sought to determine precisely what happened in the Aug. 21 alleged chemical weapons attack near Damascus.

The team took samples from victims for examination in laboratories in Europe.

A lot of the inspection team - interpreters and translators - left Syria Friday, but the core group was due to leave at 7 a.m. Saturday. That departure was accelerated Friday to 4 a.m. Saturday, which is an odd time to travel because the route the inspectors are taking - the road to Beirut - is known to be dangerous, Palmer reports.

It wasn't clear whether the departure change was related to a potential U.S. military strike, Palmer reports, but it does seem to be a last-minute and extraordinary decision.

The inspectors began their last day in Syria with a couple false starts as anxiety gripped Damascus residents amid strong signals that the U.S. was preparing to launch strikes in the country and the still-looming possibility of chemical weapons attacks.

The team of 20 scientists and other U.N. workers left their Damascus hotel Friday apparently hoping to revisit the suburbs where an alleged widespread chemical weapons attack left hundreds dead Aug. 21. They've been into the area three times already this week.

They turned back in just minutes, however, possibly because the regime of President Bashar Assad was continuing to shell the eastern Ghouta suburbs. Palmer reported hearing artillery fire as she reported live on "CBS This Morning" Friday.

Instead of making it into the suburbs, CBS News followed the inspectors to a Damascus military hospital, where they were to meet and interview six Syrian soldiers who also allegedly suffered from the effects of chemical agents of some sort upon entering into Ghouta.

Palmer reported that the men could have been manning roadblocks around the Ghouta suburbs when the attack occurred last week, or they could have been members of the Syrian army unit that, according to the government, discovered a large stockpile of chemical weapons belonging to rebel fighters in a tunnel in the area after the incident.

The inspectors are poised to return to the Netherlands in coming days, setting in motion a meticulous process of analyzing samples at specially accredited laboratories.

According to the team's U.N. mandate, the analysis will establish if a chemical attack took place, but not who was responsible for the attack that the White House said Friday killed 1,429 civilians, which is four times greater than previous estimates. The White House also said 426 of the victims were children.

U.S. Secretary of State John Kerry said Friday that Washington knows, based on intelligence, that the Syrian regime carefully prepared for days to launch a chemical weapons attack.

U.N. Secretary-General Ban Ki-moon is expected to get an initial briefing on the U.N. team's work this weekend from disarmament chief Angela Kane. It remains unclear exactly how long the process of examining samples will take.

The Organization for the Prohibition of Chemical Weapons, which provided most of the 12-strong team of inspectors, has stringent guidelines for handling and testing samples at a chain of special labs around the world to ensure it delivers unimpeachable results — which could have far-reaching ramifications once they are reported at the United Nations in New York.

"It has to be accurate. The procedure has to be absolutely rigid and well-documented," former OPCW worker Ralf Trapp told The Associated Press on Friday.

Key to the procedure is a rock-solid chain of custody rules for the samples and analysis of each sample by two or possibly three different labs. The OPCW works with 21 laboratories around the world that have to pass a proficiency test each year to ensure their work meets the organization's standards.

Strictly documenting who has had custody of samples every step of their journey from the chaos of a Damascus war zone to the sterile serenity of a specially certified lab ensures that the material to be tested is what the inspectors say it is.

The labs, and even the inspectors themselves, will likely have been chosen from countries with a neutral stance on the Syrian conflict, experts say. Inspectors at the OPCW generally are analytical chemists and chemical weapons munitions experts.

Samples they gather are put in vials that are sealed and then put in a transport container that is also secured with a fiber-optic seal, said Trapp, who is now an independent disarmament consultant. Every time the container changes hands it is documented.

"A lot of stuff is built into the system to make sure nobody has tampered with the samples or replaced one with another," he said.

Once they have taken custody of the samples, chemists at the laboratories will test them for traces of chemicals banned under the Chemical Weapons Convention. The samples will be sent to two or three labs whose results will be cross-checked to ensure they match up, again reducing the chance of an inaccurate result.

The inspectors' mission has been shrouded in as much secrecy as is possible in Syria and will remain so once the team returns to the Netherlands.

There has been no official word on what type of samples they have gathered, but media reports suggest they collected soil that could be contaminated and swipes from munitions, along with blood and hair samples from victims and possibly even tissue from corpses, Trapp said.

Officials at the OPCW, headquartered in The Hague close to the U.N.'s Yugoslav war crimes tribunal and the European Union's Europol police organization, say team members will make no comment on their return.

That means the first time their full findings are expected to be known will be after they are sent to U.N. headquarters in New York.

What remains unclear is when exactly that will happen. Trapp said the painstaking testing will take several days and the labs working on the samples won't sacrifice accuracy for the sake of quick results.

"In the current situation they would probably be pressed to speed up as much as they can, but there's always the risk if you speed it up too much that you will end up with results that could be contested by somebody," he said.