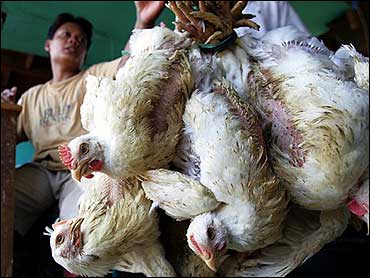 Experts were divided Tuesday over the question of whether the deadly bird flu strain ravaging farms in parts of Asia can be wiped out in poultry.

Veterinary experts at the U.N.'s agriculture agency said that given enough money, the virus can be eliminated from the global poultry population within a year.

Vietnam, the country hit hardest by bird flu, reported another death on Tuesday, and the Swiss maker of Tamiflu said it had stopped selling the antiviral drug in China and was turning over supplies to the government.

Tamiflu is one of few drugs believed to be effective against bird flu. In the event of a possible human flu pandemic, "the government is in the best position to handle rapid response and distribution," the Chinese arm of Roche Holding AG said in a statement.

The company did not say how much Tamiflu it turned over or whether it would be compensated.

Stamping out the H5N1 virus in poultry is considered the best defense against the possibility it could mutate into a human strain that sparks a global epidemic capable of killing millions of people.

However bird specialists at the World Organization for Animal Health said that the constant reintroduction of the virus from wild birds and the continuing close contact between poultry and wildlife in Asia means the best the world can hope for is to contain it until it mutates either to a milder form and disappears or into a human strain capable of spreading globally.

Experts agree a global flu epidemic is certain, but it is unknown when that will occur, whether the H5N1 strain will be the culprit or how deadly the pandemic will be.

Nobody has kept track of exactly how much has been spent on trying to eliminate H5N1 from poultry stocks. However, the World Bank estimates that on the basis of current programs and pledges, more money will be spent on stockpiling of flu drugs than on efforts to control the disease in poultry.

"On the one hand there's a certain frustration, but we see the money now flowing, so we're more optimistic than we were half a year ago," said Samuel Jutzi, director of animal production and health at the U.N.'s Food and Agriculture Organization. "We are having discussions with several donors who are prepared to come in on an emergency mode."

But much more money is needed, he said at a major global coordination meeting on bird flu and human pandemic flu hosted by the World Health Organization.

Countries such as the Netherlands, Japan, South Korea and Hong Kong, have all succeeded in eliminating highly deadly bird flu from their poultry populations, Jutzi noted.

Bernard Vallat, director general of the World Organization for Animal Health, said it is possible to get rid of the virus in poultry as long as enough money is devoted to the effort and the virus does not get to a war-torn community, where it would be impossible for veterinary services to operate properly.

However, Alejandro Thiermann, president of the International Animal Health Code at the World Organization for Animal Health, said he does not believe the virus can be eliminated in poultry.

"We know that unless the virus changes its behavior it will continue to be successfully carried by wildlife and throughout the world we have close contact between wildlife and poultry," he said. "In Southeast Asia, where the appearance of wildlife is permanent and the contact with ducks is permanent, I don't see how we could possibly break that link."

"The virus is here to stay until, through genetic mutations, it really causes havoc or it's defeated by nature and disappears, but we are not going to be able to make it disappear from domestic birds," Thiermann said.

However, the virus can be successfully controlled, he said, by rapidly detecting and snuffing out new infections.

"We certainly have the tools to bring it to a point where we can manage it and almost eliminate the chance of it becoming a pandemic strain," he said.

Even though scientists are learning more about the virus and countries are getting better at reacting to the problem, the spread of the virus continues.