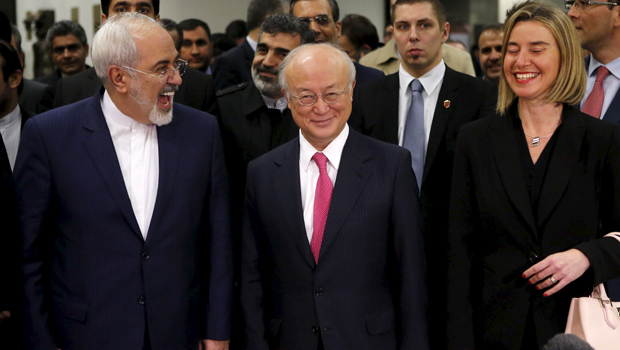 VIENNA -- Iranian nuclear activities that could be turned into making weapons have remained at agreed reduced levels since a deal between Tehran and six world powers was implemented last month, a U.N. agency reported Friday.

The report by the International Atomic Energy Agency did not specifically say that Iran was honoring its commitments. But that conclusion could be drawn from the report, which essentially ticked off the major obligations that it said Iran already met on Jan. 16, noting no change from that time until now.

A senior diplomat said however that there could be some debate between the sides on some less significant activities noted in the report, including Iranian manufacture of some components used in advanced centrifuges - machines used to enrich uranium, a potential pathway to nuclear arms. He demanded anonymity because he is not allowed to comment on the confidential report obtained by The Associated Press.

Kicking off implementation of the agreement, the agency said then that Iran had met its commitments by greatly reducing its centrifuges. It also reported that Tehran had re-engineered a reactor that in its original state could have produced large amounts of plutonium - like enriched uranium a potential pathway to an atomic bomb, and was honoring other obligations meant to reduce or eliminate its ability to make nuclear arms.

The July 14 deal with six world powers puts Iran's various nuclear activities under IAEA watch for up to 15 years, with an option to re-impose sanctions should Tehran break its commitments.

It aims to increase the time Iran would need to make enough fissile material for a nuclear weapon from several months to a year, primarily by capping Tehran's ability to enrich uranium, which can create material ranging from reactor fuel to warhead material. Under the deal, Iran committed to reduce its operating centrifuges enriching uranium by two-thirds, to just over 5,000 machines.

Iran denies any interest in nuclear weapons and says its programs are meant only to generate energy, scientific research and medical applications.