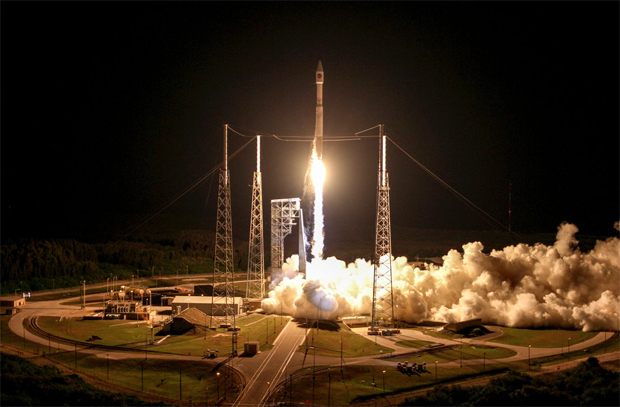 United Launch Alliance is delaying the next flight of an Atlas 5 rocket, company officials said Friday, pending analysis of what caused the first stage of an Atlas 5 launched Tuesday to shut down early, forcing the booster's less-powerful second stage to fire more than a minute longer than expected to compensate.

Even with the first stage shortfall, the rocket successfully boosted an Orbital ATK cargo ship loaded with more than 7,200 pounds of supplies and equipment into the proper orbit, putting the robotic freighter on course for capture and berthing Saturday at the International Space Station.

It was the 62nd launch of an Atlas 5, all of them successful, dating back to August 2002, and the 68th flight of an RD-180 first stage engine, a powerplant at the heart of an ongoing political controversy over use of the Russian-built engine in a rocket used to launch U.S. spy satellites and other high-priority payloads.

While Tuesday launching is considered a success, ULA has opted to delay the next Atlas 5 flight -- launch of a military communications satellite -- by at least one week, from May 5 to May 12, to given engineers more time to resolve the first stage performance shortfall.

The RD-180 used Tuesday ignited on time at 11:05 p.m. EDT (GMT-5) and boosted the rocket out of the dense lower atmosphere. Generating 860,200 pounds of thrust, the RD-180 is the most powerful first-stage engine currently in use aboard U.S. rockets.

But telemetry from the rocket, relayed via NASA television by ULA engineer Marty Malinowski, indicated the RD-180 shut down between five and seven seconds early. The Aerojet Rocketdyne RL10C engine powering the Centaur second stage then ignited for what was expected to be a 13-minute 38-second "burn."

At about 17 minutes and 16 seconds into flight, Malinowski reported "about a minute remains in this first burn of Centaur," indicating he was expected a normal shutdown close to the pre-flight prediction.

A minute-and-a-half later -- nearly 40 seconds past the predicted shutdown time -- Malinowski reported the "Centaur continues to perform very well." He finally called shutdown 19 minutes and 23 seconds after liftoff, about one minute and 14 seconds later than predicted.

"The team is evaluating the occurrence as part of the standard post-flight data analysis," according to a ULA statement released Thursday. "The Atlas 5's robust system design, software and vehicle margins enabled the successful outcome for this mission."

Asked about the apparent performance shortfall at a post-launch briefing, Vern Thorp, a senior ULA manager, called the ascent "pretty nominal" and indicated it was not unusual for actual burn times to differ from pre-launch predictions.

"The pre-launch predictions of exactly when the events are going to occur are based on a preliminary trajectory, typically it's been developed a few weeks before the launch," he said. "So it's not unusual for things to vary a little bit based on the actual conditions of launch.

"What I do know is that Centaur nailed the orbit, and like every mission, we're going to go do a very, very detailed post-flight review, we always do, always have done that, to make sure everything performed properly. From everything we've seen so far, the mission was pretty nominal."

But a discrepancy of more than a minute is unusual and, as ULA later confirmed, an "anomaly," one that left the Centaur without enough propellant to successfully drive the spent second stage into the atmosphere at the targeted re-entry point.

Instead, the stage re-entered farther downrange than expected, causing any surviving debris to fall outside of the predicted impact zone.