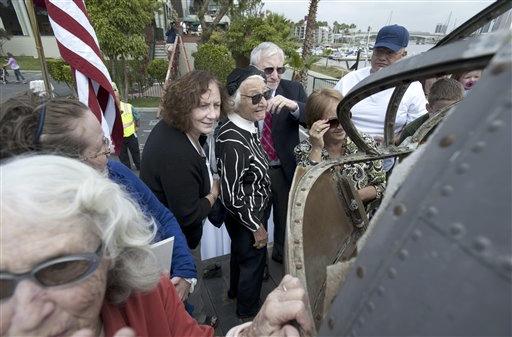 Outgoing President Leonid Kuchma called for negotiations in Ukraine's spiraling political crisis Tuesday, hours after the leader of the opposition declared himself the winner of a disputed presidential election to the approval of tens of thousands of protesters.

Another top opposition figure accepted Kuchma's proposal even though she had declared earlier on a third day of high tensions that negotiations were unthinkable.

"We now have decided to give the possibility to Kuchma to form proposals for talks," Yuliya Tymoshenko said, according to the Interfax news agency. It was not immediately clear when talks might take place.

The proposal for negotiations between the candidates — Kuchma-supported Prime Minister Viktor Yanukovych and the Western-leaning reformer Viktor Yushchenko — was out of character for the president, who is not known for compromising. But neither side held a clear advantage, and both had much to lose if violence should break out.

Earlier in the day, Yushchenko threatened a campaign of civil disobedience to back the opposition's charge that authorities rigged Sunday's vote in favor of Yanukovych.

"Ukraine is on the threshold of a civil conflict," Yushchenko told lawmakers gathered for an emergency session. "We have two choices: Either the answer will be given by the parliament, or the streets will give an answer."

Also earlier, in an unusual show of independence, four Ukrainian diplomats accused their government Tuesday of subverting the will of the people to favor pro-Russia Prime Minister Viktor Yanukovych in the nation's presidential election.

In a signed declaration, the diplomats said voters were subjected to incessant threats, terror and massive fraud. "We cannot quietly look away as Ukraine's future is buried along with the future of our children," the diplomats said in the statement.

The diplomats, based at Ukraine's embassy in Washington, spoke up just before the Bush administration urged the Ukrainian government not to certify results of Sunday's disputed presidential runoff election. Unofficial totals gave Yanukovych a narrow lead over Western-leaning opposition candidate Viktor Yushchenko.

"The United States is deeply concerned by extensive and credible indications of fraud committed in the Ukrainian presidential election," White House spokeswoman Claire Buchan told reporters at a briefing in Crawford, Texas, where President George W. Bush is spending the Thanksgiving holiday.

"We strongly support efforts to review the conduct of the election and urge Ukrainian authorities not to certify results until investigations of organized fraud are resolved," Buchan said.

The State Department renewed its demand for a complete and immediate investigation. Elizabeth Jones, assistant secretary of state for European Affairs, called in Ukraine's ambassador, Mikhailo Reznik on Monday and again Tuesday to underscore U.S. demands for an inquiry and to warn that U.S. relations with Kiev could be damaged.

In the Ukrainian capital, where some 200,000 protesters massed in the streets, U.S. ambassador John Herbst registered parallel complaints with the prime minister's office, members of parliament and the Ukrainian Foreign Ministry.

Yushchenko warned of "civil conflict" if he is not recognized as the country's new leader, accusing the government of rigging Sunday's run-off in favor of pro-Kremlin Prime Minister Viktor Yanukovych.

On the parliament floor, after a special session, Yushchenko approached the podium and swore an oath on a copy of the constitution as lawmakers who backed him shouted, "Bravo, Mr. President!"

Outside, throngs of his supporters massed behind metal barriers, holding a giant orange ribbon over their heads. They chanted "Criminals, go away!" and "Yushchenko!" Some waved signs reading, "Today or Never." Earlier, Yushchenko led the crowds in a march on the building, turning Kiev's narrow, brick streets into a sea of orange - the color of his campaign.

Four trucks with sand, which presumably could be deployed as barricades, were parked near the main square. Several other trucks loaded with sand and concrete rubble were parked about 400 yards from the square, as were two buses full of men, one of whom described them as "volunteers to protect the constitution and prevent a coup d'etat."

Ukrainian media reported that people from Donetsk, an industrial city in eastern Ukraine that supported Yanukovych, were being bused in to the capital.

"Ukraine is on the threshold of a civil conflict," the Western-leaning Yushchenko earlier told lawmakers in the chamber before his oath. "We have two choices: Either the answer will be given by the parliament, or the streets will give an answer."

About 500 Yushchenko supporters pushed through the metal barriers surrounding parliament. When pro-Yushchenko lawmakers urged them to move back, they retreated about 100 yards but remained inside an area usually off-limits. The crowd chanted "Yushchenko!"

The legislators had gathered for the emergency session to consider his request to annul the election results with a vote of no-confidence in the Central Election Commission, but it ended without taking any action. Only 191 lawmakers turned up, and support from at least 226 members of the 450-seat parliament was needed for a motion to succeed. Many pro-Yanukovych legislators simply stayed away.

The parliament vote would have been nonbinding anyway because it was not initiated by the president, who supports Yushchenko's opponent.

Many of the legislators who did show up sported orange scarves or ribbons and urged him to take the oath of office. Yushchenko's supporters filled the gallery, chanting his name.

"All political forces should negotiate and solve the situation without blood," said Volodymyr Lytvyn, speaker of parliament, appealing for calm.

"The activities of politicians and the government ... have divided society and brought people into to the streets," Lytvyn said. "Today there is a danger of activities moving beyond control."

He later called Yushchenko's oath-taking a "political act," which "cannot entail any legal consequences. It's not an oath."

Opposition leader and Yushchenko ally Yulia Tymoshenko, wearing an orange ribbon around her neck, called on lawmakers "not to go to into any negotiations" with the government. Instead, Tymoshenko said, they should "announce a new government, a new president, a new Ukraine."

The election commission's announcement Monday that Yanukovych was ahead of Yushchenko has galvanized anger among many of the former Soviet republic's 48 million people. Official results, with more than 99.48 percent of precincts counted, showed Yanukovych leading with 49.39 percent to his challenger's 46.71 percent.

But Western observers said the election was seriously flawed, and exit polls had put Yushchenko clearly ahead.

Russian President Vladimir Putin denounced criticism of the Ukrainian election by the Organization for Security and Cooperation in Europe, saying the group's conclusion is "inadmissible" because there are no official results.

"They should be more careful and responsible," Putin said of the OSCE, which monitored the balloting along with other Western groups.

"We cannot recognize or protest results that are not yet official," Putin, who strongly praised Yanukovych during the campaign and congratulated him afterward, told a news conference during a visit to Lisbon, Portugal. "Ukraine is a state of law. It doesn't need to be lectured."
MMIV, The Associated Press. All Rights Reserved. This material may not be published, broadcast, rewritten, or redistributed