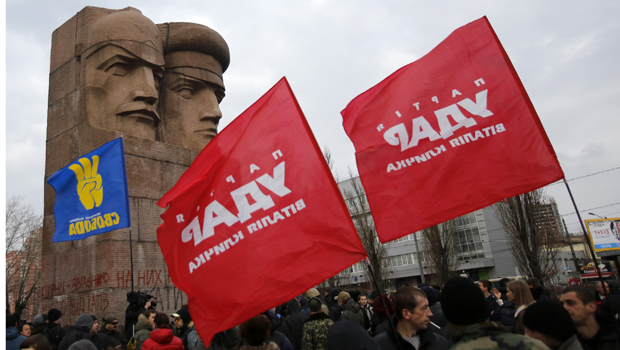 KIEV -- Ukraine's acting government issued a warrant Monday for the arrest of President Viktor Yanukovych, last seen in the pro-Russian Black Sea peninsula of Crimea, accusing him of mass murder of protesters who stood up for months against his rule.

Calls are mounting in Ukraine to put Yanukovych on trial, after a tumultuous presidency in which he amassed powers, enriched his allies and cracked down on protesters. Anger boiled over last week after snipers attacked protesters in the bloodiest violence in Ukraine's post-Soviet history.

The turmoil has turned this strategically located country of 46 million inside out over the past few days, raising fears that it could split apart. The parliament speaker is suddenly nominally in charge of a country whose economy is on the brink of default and whose loyalties are torn between Europe and longtime ruler Russia.

The White House said late Monday the whereabouts of President Yanukovych have not been confirmed and said Yanukovych is not, quote, "actively leading the country." White House spokesman Jay Carney said the Obama administration believes the Ukrainian parliament has lawfully elected a new speaker.

CBS News correspondent Holly Williams reports the mood Monday among opposition supporters in Kiev, and on the grounds of the seized presidential palace, is jubilant, but tinged with confusion.

The country is to hold new elections in May, but right now, many Ukrainians are simply not sure who's running their country.

Natalia Dovhopol told CBS News she was happy to see the back of Yanukovych, but when asked who was left running the nation, she said she didn't know.

"There are a lot of these small leaders, but I don't know who's going to be in charge of the country," she told Williams.

Ukraine's acting interior minister, Arsen Avakhov, said on his official Facebook page Monday that a warrant has been issued for the arrest of Yanukovych and several other officials for the "mass killing of civilians." At least 82 people, primarily protesters, were killed in clashes in Kiev last week.

"An official case for the mass murder of peaceful citizens has been opened," Avakov wrote on Facebook. "Yanukovich and other people responsible for this have been declared wanted."

Avakhov says Yanukovych, 63, arrived in Crimea on Sunday and relinquished his official security detail, then drove off to an unknown location. He fled the capital, Kiev, by helicopter on Friday.

After signing an agreement with the opposition to end a conflict that turned deadly, Yanukovych fled the capital for eastern Ukraine. Avakhov said he tried to fly out of Donetsk but was stopped, then went to Crimea.

Tensions have been mounting in Crimea, where pro-Russian protesters raised a Russian flag on a city hall in one town and scuffled with police. Russia maintains a big naval base in the Crimean port of Sevastopol that has tangled relations between the countries for two decades.

Yanukovych set off a wave of protests by shelving an agreement with the EU in November and turning toward Russia, and the movement quickly expanded its grievances to corruption, human rights abuses and calls for Yanukovych's resignation.

"We must find Yanukovych and put him on trial," said protester Leonid Shovtak, a 50-year-old farmer from the western Ivano-Frankivsk region who came to Kiev's Independence Square to take part in the three-month protest movement. "All the criminals with him should be in prison."

The speaker of parliament assumed the president's powers Sunday, even though a presidential aide told the AP on Sunday that Yanukovych plans to stay in power.

The speaker, Oleksandr Turchinov, said top priorities include saving the economy and "returning to the path of European integration," according to news agencies. The latter phrase is certain to displease Moscow, which wants Ukraine to be part of a customs union that would rival the EU and bolster Russia's influence. Russia granted Ukraine a $15 billion bailout after Yanukovych backed away from the EU deal.

U.S. Ambassador Geoffrey Pyatt said the U.S. is ready to help Ukraine get aid from the International Monetary Fund.

The European Union, meanwhile, is reviving efforts to strike a deal with Ukraine that could involve billions of euros in economic perks. EU foreign policy chief Catherine Ashton is visiting Kiev on Monday and Tuesday.

The protest movement has been in large part a fight for the country's economic future - for better jobs and prosperity.

Ukraine has struggled with corruption, bad government and short-sighted reliance on cheap gas from Russia. Political unrest has pushed up the deficit and sent exchange rates bouncing, and may have pushed the economy back into a recession.

Per capita economic output is only around $7,300, even adjusted for the lower cost of living there, compared to $22,200 in Poland and around $51,700 in the United States. Ukraine ranks 137th worldwide, behind El Salvador, Namibia, and Guyana.

Ukraine has a large potential consumer market, with 46 million people, an educated workforce, and a rich potential export market next door in the EU. It has a significant industrial base and good natural resources, in particular rich farmland.