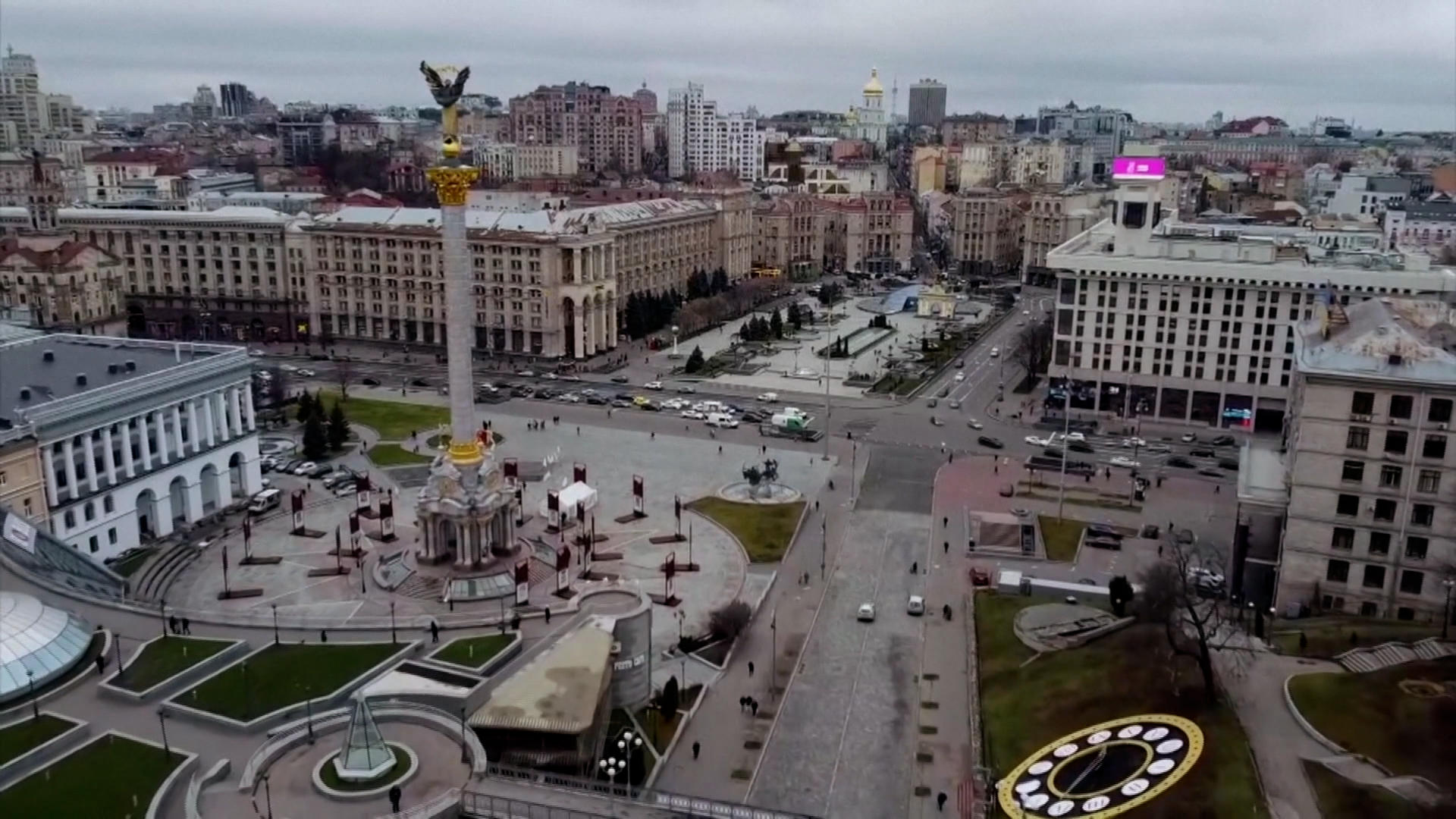 The threat of a Russian invasion of Ukraine keeps escalating, as last-minute diplomacy continues.

President Vladimir Putin says Ukraine belongs with Russia and wants a promise it will never join NATO, the western military alliance. But his saber-rattling has produced exactly what he was trying to prevent: more NATO and U.S. troops in Eastern Europe. Still, yesterday Ukrainian President Volodymyr Zelensky angrily called on the West to do more, saying this is not about war in Ukraine, this is about war in Europe.

Today, President Biden met with the National Security Council at the White House, and Secretary of State Blinken repeated the U.S. view that Putin's plan to invade "is moving forward."

We spoke late in the week with the foreign minister of Ukraine, Dmytro Kuleba, about the crisis -- at the front.

Dmytro Kuleba: We still see a room for diplomacy to, let's put it this way, demotivate President Putin from resorting to a large military operation.

Lesley Stahl: Let me ask you about some hints that we've seen that your government is sending signals that you are willing to abandon your ambition to enter NATO, in other words, to satisfy one of Mr. Putin's big demands. Is that true?

Dmytro Kuleba: No. We are not sending such signals. The majority of Ukrainians want Ukraine to become a member of NATO. The only signal we are sending to the world is that if Ukraine succeeds and if Russia pulls back, it will be much safer for entire democratic world.

Lesley Stahl: Are you facing any kind of pressure from the United States or any of the European NATO members that you should loosen up on your insistence?

Dmytro Kuleba: There are some countries who send us mess-- messages. And all I can say is that, again, Ukraine is seeking membership in NATO.

Lesley Stahl: Has there been any subtle pressure from the United States for you to abandon your desire?

Dmytro Kuleba: No. So far, this message is ca-- came from few European members of NATO.

Lesley Stahl: Is there a fear that this thing is widening beyond what's going on around your border?

Dmytro Kuleba: This thing has been wide from the very beginning. It's not only about Ukraine. It's a global-- it's about a global struggle between democracies and authoritarian regimes, between those who want to play by the rules and those who want to rewrite rules in their favor.

Lesley Stahl: You know, in the early '90s when the Soviet Union broke up and Ukraine became an independent country, you gave up your nuclear weapons. You had a-- a giant arsenal, I think the third-largest nuclear arsenal in the world. You agreed to send the nukes back to Russia. And in return, you got security guarantees from the United States and from Russia. Do you all look back on that and say, "We should not have given up our nuclear weapons? It was a mistake."

Dmytro Kuleba: I do.

Lesley Stahl: Do you feel that the United States owes you?

Dmytro Kuleba: Partially. You know, whatever mistakes were made in history, our current life gives all of us excellent opportunities to correct those mistakes. And given the fact that we abandoned our nuclear-- nuclear arsenal, given the fact that the security assurances that were given to us failed, I think some countries should feel responsibility for this-- for this. And work hard on finding the right and efficient security guarantee for Ukraine.

Ben Hodges: What a terrible shame that tens of thousands of people may die and-- and hundreds of billions of dollars will be lost because of-- this ego.

Retired general Ben Hodges knows a lot about Vladimir Putin. Hodges was a NATO commander in 2014 when Russia last invaded Ukraine and annexed Crimea. Later, he was the top general of the U.S. Army in Europe until 2017.

Lesley Stahl: Is Putin boxed in at this point?

Lesley Stahl: Well, if he withdraws--

Lesley Stahl: Yeah, but the world is gonna say he was one-upped by Biden. Can he-- can he accept that? We know his ego.

Lesley Stahl: Do you think what happened in Afghanistan, our ugly retreat from Afghanistan, had any effect on his thinking? Did he think the United States had become soft and weak?

Ben Hodges: I think that the way we came out of Afghanistan probably brought some satisfaction to President Putin, to see us struggle like this. And I would imagine that in his mind he thought, "Okay, this-- this new government doesn't have the strength to make hard decisions." So, I'm sure that that factored into his calculation. Certainly a miscalculation-- nonetheless.

Lesley Stahl: You know, you have said that Mr. Putin could-- you used the boa constrictor analogy, choke off Ukraine without a full invasion.

Ben Hodges: Well, I was in Kyiv just over two weeks ago and had the chance to spend about an hour with President Zelensky and he really impressed on me the impact that his economy was feeling. There already was this pressure, the boa constrictor metaphor was already there.

Lesley Stahl: But if he can do that without a full-scale invasion, why would he move in?

Ben Hodges: I don't think he is going to launch what some people call a full-on invasion, or all-out assault. I just don't think he needs to do that because he--the continuous economic pressure could choke the government and cause it to collapse.

To prevent that, the U.S. has sent in $650 million worth of military equipment, including javelin anti-tank missiles, large quantities of artillery and mortars, and secure radios. But Washington is not sending troops into Ukraine. Foreign Minister Kuleba praised the Biden administration's handling of the crisis.

Lesley Stahl: Have they done enough?

Dmytro Kuleba: As long as Russia sits on our border and in the occupied territories of Ukraine, it's never enough. Ukraine is not asking American soldiers to fight for us. This is our country and we will defend it. But, dear Americans, what happens here matters to you as well because if Russia prevails here, other malicious powers across the globe will realize that the collective West is unable to defend its principles and what it stands for. And it will provoke them to act more aggressively in other parts of the world to pursue their interests against the U.S. interests.

Lesley Stahl: Are you speaking about China?

Lesley Stahl: Do you think the United States should impose sanctions now?

Dmytro Kuleba: It would be helpful to impose at least some.

Lesley Stahl: There have been reports that your president, and perhaps you, have felt that the-- President Biden continually saying that an invasion is imminent, is boxing Mr. Putin in and perhaps almost encouraging an invasion.

Dmytro Kuleba: No. We never-- we never thought that-- President Biden is encouraging an invasion by Russia. But, we were very open with our friends in the United States that regular public messages about the imminence of war, they cause damage to our economy and to our financial stability.

Seems President Biden got that message. This past week, he committed more help for the Ukrainian economy.

Dmytro Kuleba: They issue $1 billion in loan guarantees to Ukraine. This is a message to everyone involved in business activity that partners of Ukraine have trust in this country, and they're confident that this country will remain stable, and it's safe doing business in this country.

Despite the hit to the economy, in Kyiv, the capital, it's been looking like business as usual - just another European city - belying the drumbeat of war.

At the center of the crisis is 44-year-old Volodymyr Zelensky on the frontlines in fatigues or dressed up with heads of state. He's an unlikely leader, a political neophyte who, less than three years ago, was a comedian on television. We talked about him with Yale historian Timothy Snyder, author of several books on the region.

Lesley Stahl: This comedian, really, an entertainer gets on the world stage and he's up against this powerful ex-KGB agent who plays chess magnificently. He's never led anything before.

Timothy Snyder: That's true. This is, so to speak, a little guy who's used to dealing with big guys and who has found a way to do it, which is that he's a little funnier, he's a little faster, he's a little sharper. And, one thing for certain about him, is that he's not a product of a political machine. And that makes him a kind of wild card in this overall situation. But it is also what makes him intolerable for Putin. Because what Putin wants is a predictable Ukraine, a predictable Ukrainian president And Zelensky, whatever his flaws, is the opposite of that.

Zelensky is Ukraine's sixth president since it first became an independent democracy just 30 years ago. Before that, says historian Snyder, the country's suffering was pretty much unparalleled.

Lesley Stahl: While the rest of the world is on edge, strangely, inside Ukraine there's calmness.

Timothy Snyder: They are perfectly aware that there's a possibility of invasion. But, the difference is that they don't think that this is so exceptional. They think it's come before and it can come again.

If it comes again, and the Russians invade, they'll face a Ukrainian military that is far bigger, better-trained, motivated and equipped than it was eight years ago when Putin took Crimea.

Dmytro Kuleba: Large-scale invasion in Ukraine by Russia will inflict huge damage on Russia itself. Economically, because of sanctions that will be slammed on Russia immediately. Militarily, because we are not the country that will give up. This is our land. We will be defending it.

Lesley Stahl: So, what happens if this is the status quo? The Russians have troops almost all around you. They're just sitting there and they're hurting your economy. They're tryin' to suffocate you to the point that they can just get what they want from you.

Dmytro Kuleba: Well, you see, they tried to suffocate us, and destabilize us, and shatter us from the inside for the last 300 years. But they failed. I'm still-- sitting here with you as Foreign Minister of independent Ukraine. We know the threat. We understand it. We learned how to live with it. And we stand for a just cause.