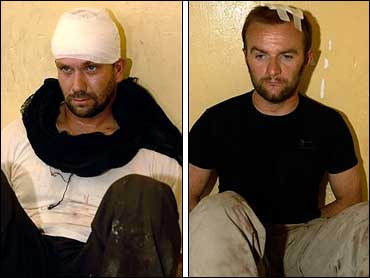 In a dramatic show of force, British soldiers used tanks to break down the walls of the central jail in this southern city Monday and freed two Britons, allegedly undercover commandos arrested on charges of shooting two Iraqi policemen, witnesses said. The Basra governor called the rescue a "barbaric" act of aggression.

But in London, the Ministry of Defense said in a statement that two British troops held by Iraqi authorities in Basra were released as a result of negotiations. It said the two service personnel were with British forces.

A Defense spokesman added he had no information suggesting they were freed as a result of any overt military action. But the spokesman stopped short of denying reports that British tanks crashed through the walls of a jail in Basra to free the two troops.

British Broadcasting Corp. quoted an unidentified Iraqi official in Basra as saying that the two Britons "were driving a civilian car and were dressed in civilian clothes when a shooting took place between them and Iraqi patrols."

In a public humiliation, Arab satellite television stations showed pictures of two Western men sitting on the floor of the jail building with their hands tied behind their backs. One of the men had a bandage covering most of the top of his head, the other had blood on his clothes. Television commentary identified them only as Britons.