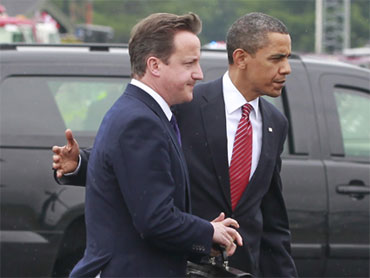 Prime Minister David Cameron told the BBC he had opposed the decision to return the cancer-stricken prisoner to Libya on compassionate grounds in August.

He spoke before leaving Tuesday for his first visit as British leader to the United States, where he is expected to face questioning about the case. Cameron took office in May, after an inconclusive election that resulted in his Conservative Party forming a coalition government that ousted the previous Labour Party administration.

"As leader of opposition, I couldn't have been more clear that I thought the decision to release al-Megrahi was completely and utterly wrong," Cameron said.

The decision had been made by Scotland's government, which holds some limited powers within the United Kingdom, and not by the previous British government headed by Prime Minister Gordon Brown.

Al-Megrahi served eight years of a life sentence for the Dec. 21, 1988, bombing of Pan Am Flight 103 over Lockerbie, Scotland, killing all 259 people on board, most of them Americans, and 11 people on the ground.

Relatives of victims killed in the crash said Cameron's words must be backed by actions to have any real meaning.

"That's a wonderful statement, what are you going to do to back that up with substance," asked Bert Ammerman of River Vale, New Jersey, who lost his brother Tom in the crash. He called for investigations in the UK and U.S. into the circumstances of the release.

"There has to be an investigation done on how this took place, and heads have to roll," he said.

Scotland's government has previously held an inquiry into the case, while Brown's administration released internal documents related to the case.

Glenn Johnson of Greensburg, Pennsylvania, whose daughter Beth Ann died in the crash, said Cameron's words offered little comfort. "For the prime minister to come forward and say it was a mistake, that's just politics," he said.

Two New York senators, who have called for an inquiry into oil giant BP's lobbying of the British government over a prisoner transfer agreement with Libya, reacted positively to the comments. They suspect the lobbying may have bearing on the case.

"This admission is a first step in getting to the bottom of what could well be a quid pro quo for an oil contract," Sen. Charles Schumer said.

More on the BP-Lockerbie Controversy

Sen. Kirsten Gillbrand said she respected the comments, but "we need further review of how and why al-Megrahi was released, so we can learn from this mistake and assess what steps can be taken so that justice is served and terrorists are held accountable."

"I have no idea what BP did, I am not responsible for BP," Cameron said. But he insisted that discussions between BP and Brown's administration on a prisoner transfer agreement did not include talks on al-Megrahi.

Al-Megrahi served eight years of a life sentence for the Dec. 21, 1988, bombing of Pan Am Flight 103 over Lockerbie, Scotland, killing all 259 people on board, most of them Americans, and 11 people on the ground.

BP has acknowledged it had urged the British government to sign a prisoner transfer agreement with Libya, but stressed it didn't specifically discuss al-Megrahi's case during those talks.

Britain's growing diplomatic and business ties with Libya had been under intense scrutiny since al-Megrahi's release. Critics have accused British authorities of putting commercial interests before the families of the 270 victims of the attack.

Officials in the U.K. have insisted the prisoner transfer deal was part of broader diplomatic effort aimed at furthering efforts to transform Libya from a rogue state to Western ally. Libyan leader Moammar Gadhafi renounced terrorism and dismantled his country's clandestine nuclear program in 2003.

Schumer and three other U.S. senators asked the State Department last week to investigate whether BP pressured lawmakers as part of efforts to seek access to Libyan oil fields.

In a letter sent Saturday to U.S. Secretary of State Hillary Clinton and Sen. John Kerry, Britain's Foreign Secretary William Hague said there was nothing to suggest BP had influenced the Scottish government.

In Washington, Cameron will hold talks with President Barack Obama, as well as meetings with House Speaker Nancy Pelosi and senior legislators. Separately, he will meet with Sen. John McCain.