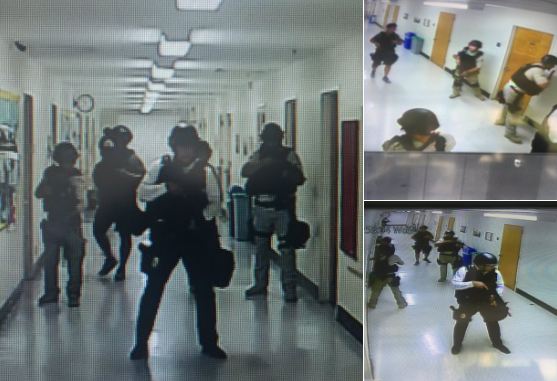 LOS ANGELES -- Students and faculty on campus turned to social media Wednesday to share photos and information during a shooting at the University of California, Los Angeles, that left two people dead.

Those on campus shared photos on Twitter and Instagram of rooms barricaded, a heavy police presence and emergency personnel.

One Twitter user shared a photo, and said: "Doors open outward with no locks so we had to improvise our own locking mechanism."

Sources tell CBS News the shooting was in campus Engineering Building Number 4. The LAPD said during a news conference that the incident appears to have been a murder-suicide. There is no continuing threat on campus or outstanding suspects.

During the campus lock-down, students shared photos on social media of improvised locks, in an attempt to barricade themselves in rooms.

One Twitter user shared photos of police inside what appeared to be one of the buildings on campus.

Some shared photos of the police and emergency personnel near or on campus. Various law enforcement agencies and first responders arrived on the scene as the incident unfolded.

Information was also sent out via social media.

The UCLA Bruin, the school's student-run student newspaper, said on its Twitter account that the shooter was a white male.

UCLA Newsroom tweeted that police were sweeping the building for a possible shooter.

The LAPD also turned to social media to share information.

UCLA is located on the west side of Los Angeles, and has a student body of approximately 43,000.

It's currently the week before final exams.