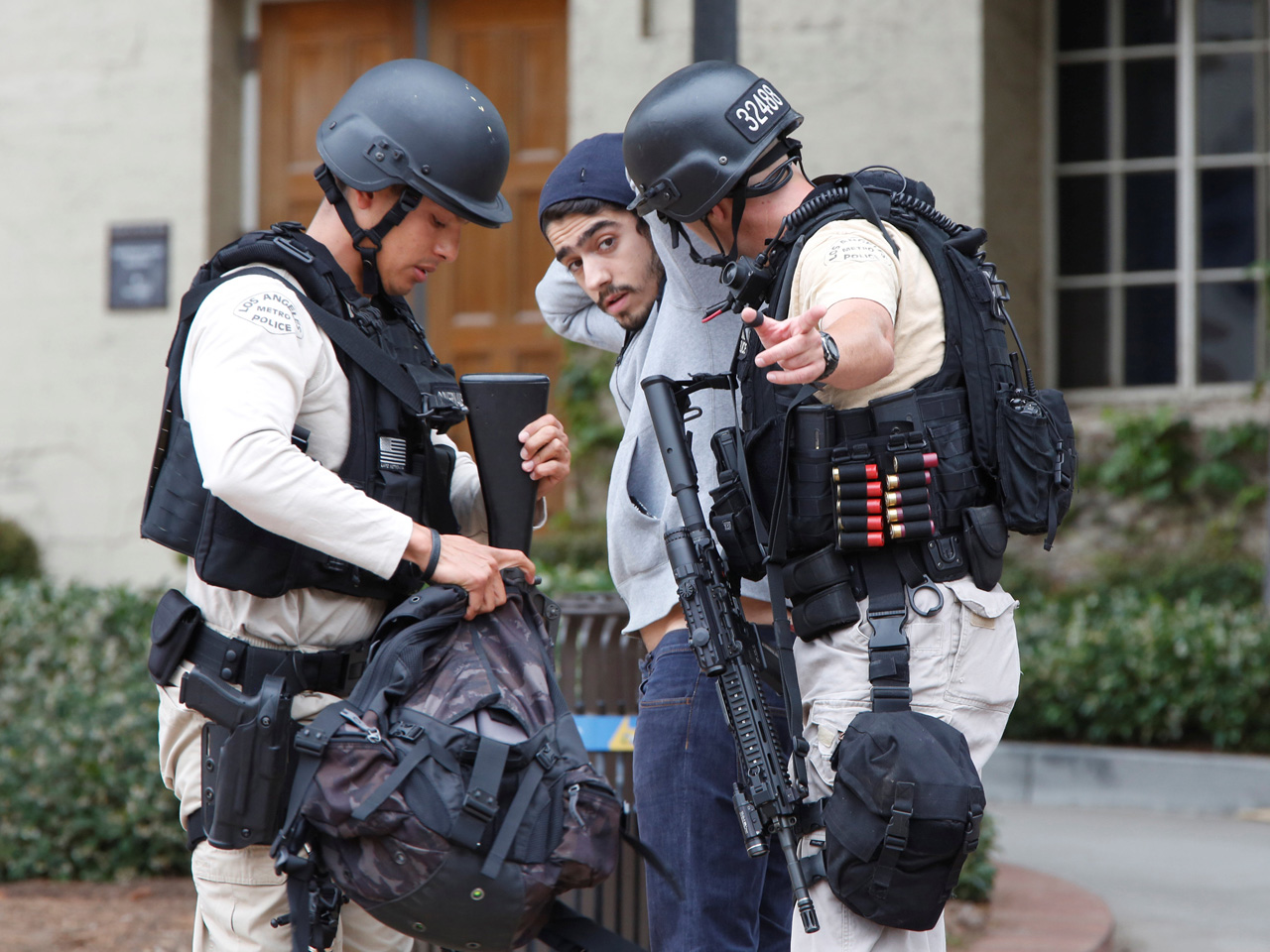 LOS ANGELES - The entire University of California, Los Angeles, campus was placed on lockdown after a shooting on Wednesday morning that left two people dead.

Law enforcement sources confirmed to CBS News that it was a murder-suicide involving two men. A note and a gun were recovered, police sources say. The incident took place inside an office inside the engineering building.

"A homicide and a suicide occurred in the engineering part of the UCLA campus on the south side," L.A. police chief Charlie Beck said. "It appears it is entirely contained. We believe there are no suspects outstanding, and no continuing threat to UCLA's campus."

A federal law enforcement source told CBS News the man who was killed was William S. Klug, a professor of mechanical and aerospace engineering.

The identity of the shooter was not released, but he was said to be a student.

Klug, 37, was an El Segundo resident known in the community for coaching his son's little league baseball team, CBS Los Angeles reported. He had two young children and is survived by his wife.

Friends described Klug as a calm, quiet man with a passion for learning and teaching.

"Kids loved working with him because he was such an easy coach to work with," Giroux said.

A motive for the shooting was not released by authorities. Police said a possible suicide note was found at the scene.

"To have your son grow up without a dad is rough," Giroux said, fighting back tears. "So I'm hoping the community here can kind of rally around that."

A university-wide alert system for parents and students sent out a warning over Twitter at 9:58 a.m. local time.

The Los Angeles Police Department said earlier in the day the situation led to a "citywide Tactical Alert." The lockdown was lifted shortly after noon, about two hours after the shooting, CBS Los Angeles reported.

Dozens of students and professors took to social media to give updates as the situation unfolded.

Some students reported that they were unable to lock their doors, and needed to improvise methods -- with belts, printers or tables -- to attempt to keep their doors locked.

Scott Waugh, an executive vice chancellor and provost, said the university would look into concerns about doors that would not lock. Overall, he said, the response was smooth.

Umar Rehman, 21, was in a math sciences hall adjacent to the building where the shooting took place, called Engineering IV. The buildings are connected by walkway bridges near the center of the 419-acre campus.

"We kept our eye on the door. We knew that somebody eventually could come to the door," he said, acknowledging the terror he felt.

Those in the room devised a plan to hold the door closed using a belt and crowbar and demand ID from anyone who tried to get in. When they eventually got word that the building had been cleared, they walked out.

Senior Daphne Ying, 21, said students in her classroom tied a projector's long cord to the doorknob and the other end to a chair bolted to the ground. The door opened to the hallway and had no lock, she said.

"All of us were really scared and nervous. All of us kept really calm, we barely spoke," she said.

Tanya Alam, 19, also was in a classroom in the math sciences building with 20 other students. She said she saw an alert on her phone that warned of police activity near Engineering IV. Then, several minutes later, an alert said there was an active shooter.

"I let that sink in. Then I realized there was a shooter on campus and Engineering IV is right here! So I said it out loud," she said.

The teacher's assistant told students to shut their laptops, turned out all the lights and switched off the projector. They were ordered to be quiet and got under their desks. Sitting on the ground, Alam cried.

Students were told to put their phones away, too, but in the darkened room, the glow of screens illuminated many faces, she said.

"On one hand, yes, this is an emergency. But on the other hand when your mother is calling from miles away..." Alam said, trailing off.

Their entire classroom was finally allowed to leave. Students were greeted by a phalanx of SWAT team members but were not searched.

SWAT officers cleared occupants one by one at the mathematical sciences building. One man walked out with his hands up and was told to get on his knees. An armed officer searched him and his backpack, then sent him on his way with his hands still in the air.

Olivia Cabadas, a 22-year-old nursing student, was getting ready to take a quiz in the mathematics building when her classmates began getting cellphone alerts.

Through a window, they could see students rushing down the hallway. An officer yelled that everyone should get out.

"It was just a little surreal -- this is actually happening," Cabadas said. "It was chaos."

The White House said in a statement President Obama was briefed on the situation.

The school on the west side of Los Angeles is a flagship of the University of California system, with about 43,000 students. It's currently the week before final exams. Classes were canceled for the rest of Wednesday but were expected to resume Thursday.