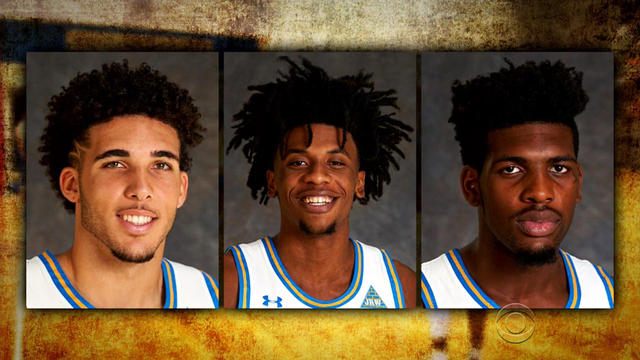 Pac-12 Commissioner Larry Scott said in a statement that the players were flying back to Los Angeles.

"The matter has been resolved to the satisfaction of the Chinese authorities," Scott said. "We are all very pleased that these young men have been allowed to return home to their families and university."

Asked about the case before Scott issued his statement, China's foreign ministry said it had no additional comment. On Monday, ministry spokesman Geng Shuang said that three American men were being investigated in the eastern city of Hangzhou for alleged theft and that China and the U.S. were in contact over the matter.

Chinese authorities detained the UCLA freshmen for questioning about allegations of shoplifting before a recent game against Georgia Tech in Shanghai. The UCLA team returned to the U.S. without them on Saturday.

Earlier Tuesday, President Trump said he had a long conversation on the matter with Chinese counterpart Xi Jinping.

"What they did was unfortunate," Mr. Trump told reporters aboard Air Force One as he was returning to Washington after a nearly two-week visit to Asia that included an earlier stop in Beijing. "You know, you're talking about very long prison sentences. They do not play games."

In his statement, Scott thanked the president, the White House and the U.S. State Department for their efforts toward resolving the incident.