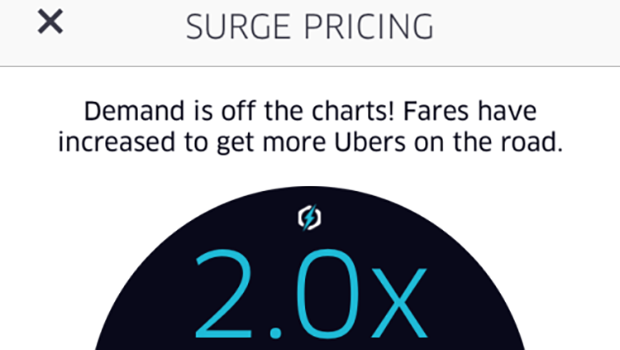 Uber gets a lot of flack for raising prices when need for a ride is highest. Competitor Gett has even built its marketing campaign around the idea that it isn't "uber ripping you off" because "the only time we surge is never o'clock."

But the ride app leader is defending its surge pricing structure with a case study demonstrating how it affected service on two very busy nights in New York City. According to its analysis, upping fares reduces requests and increases response. Ergo, everybody wins.

"When demand for rides outstrips the supply of cars, surge pricing kicks in, increasing the price," the company explained in a release. Uber said that surge pricing reduces the number of requests made during a peak time, while drawing more drivers to busy areas. "As a result, the number of people wanting a ride and the number of available drivers come closer together, bringing wait times back down."

"Without surge pricing," the company stated, "Uber is not really Uber -- you can't push a button and get a ride in minutes."

The case study, conducted with Chris Nosko, an economics professor at the University of Chicago Booth School of Business, Uber's research head Jonathan Hall and data scientist Cory Kendrick looked at the rides, costs and completed fares after a sold-out Ariana Grande concert at Madison Square Garden in March and the same metrics for a portion of New Year's Eve 2014.

Uber used the aberration as a natural experiment to study what happens when you do or do not have surge pricing in place during a high-demand period.

After the Ariana Grande concert let out, Uber's data show that the number of people opening the app on their phones jumped to four-times normal. Surge pricing kicked in, adding a multiplier to fares of between 1.3 and 1.8. At the same time that drivers swarmed to the neighborhood, nearly doubling available cars, about half of users -- presumably turned off by the high price quotes -- closed the app without requesting a car.

On the flip side, the report showed that when surge pricing failed to work for 26 minutes in the wee hours of 2015, requests doubled, waiting time doubled and completion rate plummeted to under 25 percent.

Before and after the outage, the fare multiplier was around 2.7 times normal cost.

So, will this stop people from complaining about Uber's surge pricing? To that we can say unscientifically, yet unequivocally: no. But maybe it'll help you appreciate why you have to pay so much to get home on a rainy Friday night -- and why Uber's not likely to get(t) rid of surge pricing any time soon.