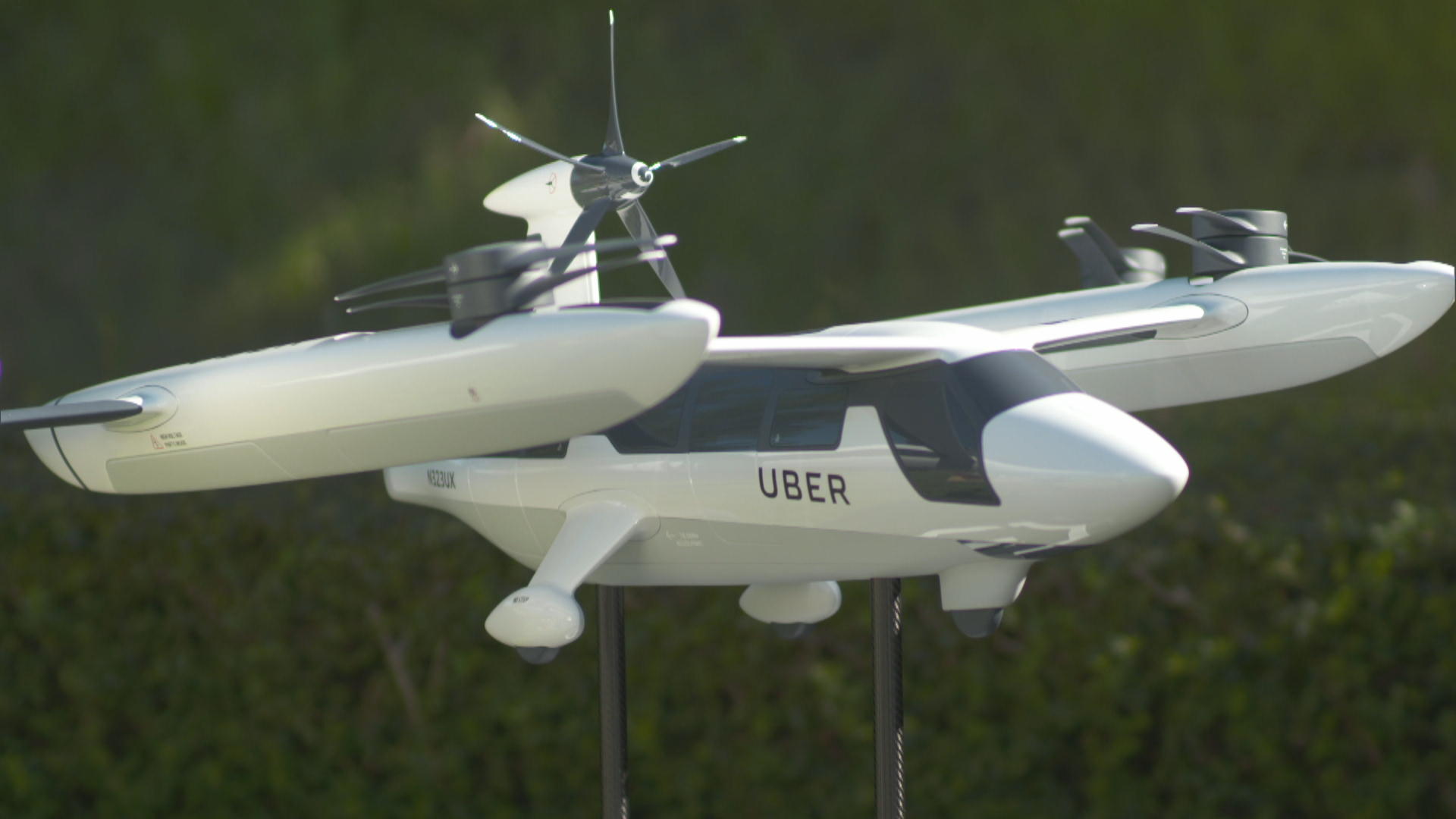 Uber is releasing new information about Uber Air, an ambitious plan to launch a fleet of autonomous flying taxis in two years. "CBS This Morning" got the first look at the design models that will be on display at Tuesday's Uber Elevate Summit in Los Angeles.

"We think cities are going to go vertical in terms of transportation and we want to make that a reality," Dara Khosrowshahi told CBS News' Bianna Golodryga.

The Uber CEO said their new model of an air taxi shows the company's vision for the future of transportation. It's a world where passengers request an Uber Air on their phone, then head to rooftop sky ports where the aircraft take off.

"We want to create the network around those vehicles so that regular people can take these taxis in the air for longer distances when they want to avoid traffic at affordable prices," Khosrowshahi said.

Uber's chief product officer, Jeff Holden, said the program is meant to be "community friendly." He says they're still in the design phase and explained the technology works similar to a helicopter, with stacked rotors to create lift. But unlike a helicopter, the aircraft will have clusters of small propellers and run on electricity, making it quieter, more efficient and more affordable.

Although piloted at first, the goal is for the flying taxis to become autonomous. But questions remain about how they will guarantee safety. Uber also said for the program to become profitable it will need to move beyond a niche market.

"One of the key tenets of this technology is for us to have four riders in each vehicle. So, essentially, the cost per ride goes down," he said. "The combination of mass market and sharing, which is really what Uber is all about, can bring this to the masses, can make it affordable for normal people."

Khosrowshahi took over a company in crisis when he replaced Travis Kalanick as CEO in August. The eight-year-old company is still not profitable.

"Ambition is what has created this company from the very beginning," Khosrowshahi said. "Part of what made this company great is that we take big, bold bets. That's part of the norms and the culture of this company and this is another big, bold bet that we think ultimately is something that the cities of the future are going to need."

While Khosrowshahi is focused on the future, the company is still navigating a troubled past including a March accident involving a self-driving Uber with a safety driver behind the wheel that killed a pedestrian. The CEO says the software that decides how the vehicle reacts to objects on the road may have played a role in that crash, but the company is waiting on the results of an NTSB investigation.

The company is also working to rehabilitate its image. A bombshell blogpost last year detailing a corporate culture of sexual harassment was followed by numerous lawsuits and an internal investigation that led to Kalanick's resignation.

"If it's not changed right now, then I failed. I will tell you that the company took upon itself to change. The change didn't start with me," Khosrowshahi said. "What happened in the past was deeply unpleasant and wrong but the company from a bottoms up standpoint started changing and I think it continues apace."

He said it's "game over" if the company can't provide a workplace where female employees feel safe. "We want everyone at Uber to feel safe….And if we fail at that, we will fail at a company. But we don't intend to."

Khosrowshahi said he's concentrating not just on correcting the company's past missteps but on making the necessary strides to ensure the company's future growth, including the launch of Uber Air.

"You've got to set aggressive goals in order to push teams and people to make those goals," he said.

Uber plans to have Uber Air flight demonstrations as early as 2020. The company has also partnered with NASA to develop technology to control air traffic and prevent crashes. The first two Uber Air cities will be Dallas and Los Angeles.