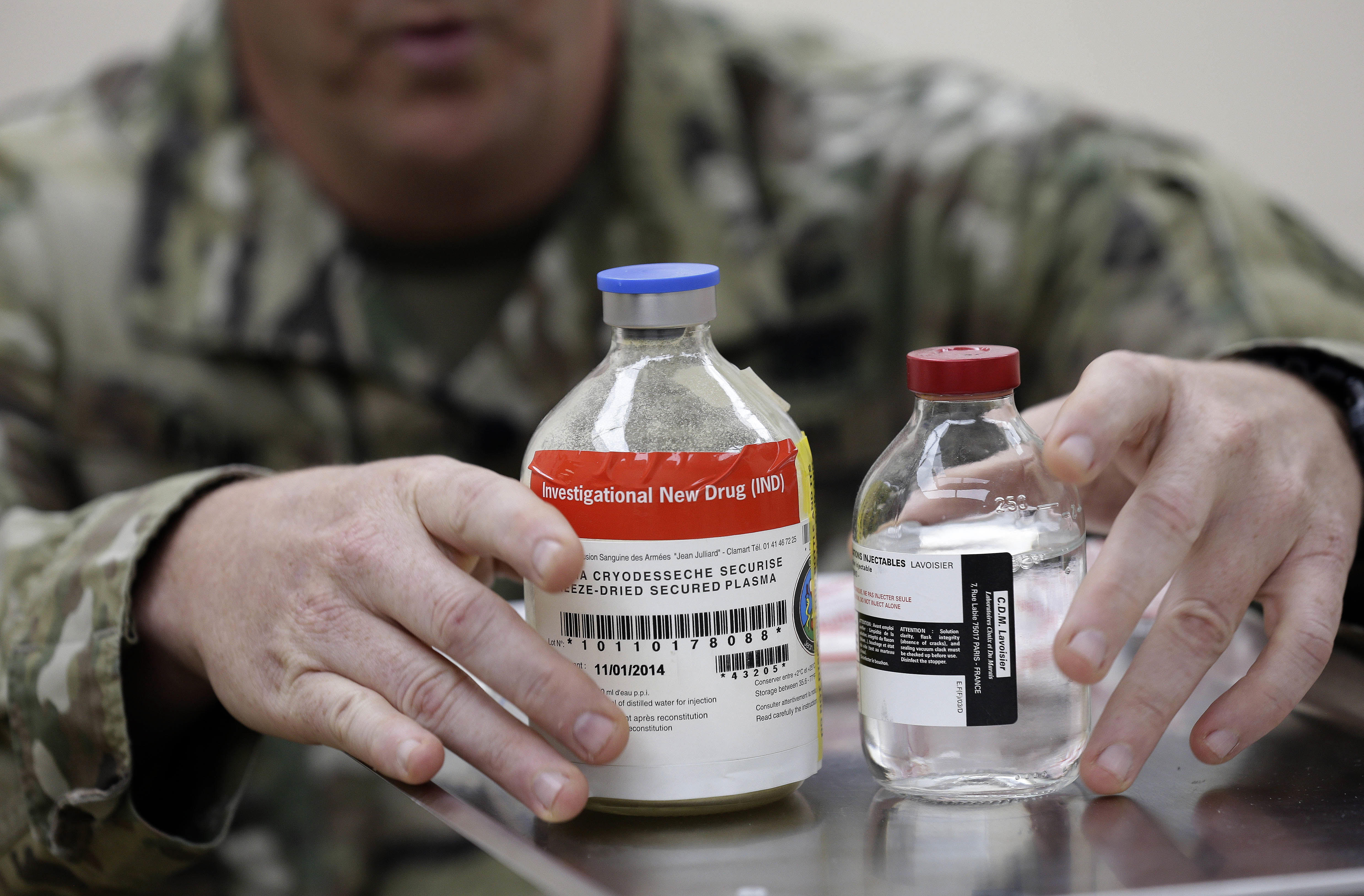 RALEIGH, N.C. -- All of the U.S. military's special operations fighters sent off to warzones and raids now have an essential addition to their first-aid kits: freeze-dried blood plasma.

Last month, the Marines Corps' special ops units became the last of the military branches to begin carrying freeze-dried plasma. The plasma helps clot blood and can prevent badly wounded troops from bleeding to death on the battlefield.

It saved Army Cpl. Josh Hargis' life. He lost parts of both legs in 2013 when he stepped on a land mine during a midnight raid in Afghanistan. The medic in his Ranger unit used the freeze-dried plasma to keep him alive on the battlefield for more than 90 minutes until he could be evacuated by helicopter.

The medic, Sgt. Bryan Anderson, said having plasma ready made the difference in helping stanch internal bleeding after the blast shattered Hargis' pelvis.

"Wherever blood is oozing out, it's helping to clot that blood up," Anderson said. "It blows my mind that Josh was able to stay alive and I think about that night every day of my life."

Their raid on a Taliban leader's compound killed four Americans and even more friendly troops by suicide bombers and land mines. Anderson's life-saving labor continued despite seven explosions within 10 yards, leading to a Distinguished Service Cross, the second-highest military honor for heroism.

The plasma Anderson used was stored in a thick glass bottle and kept in a kit with IV lines and distilled water. The medic has to pour the water into the bottle, swirl it around and inject it. Before his injury, Hargis used to think the freeze-dried equipment took up too much room in the medic's bag.

"It really seemed like something that was a little unrealistic to carry out in the field, but it ended up working out," said Hargis, who lives in Peyton, Colorado, with his wife and kids. A photo of Hargis' commanding officer giving him a Purple Heart went viral online.

Plasma is a straw-colored liquid that contains proteins that make the blood clot. Unlike current plasma supplies that have to be slowly thawed from frozen storage, the dehydrated and powdered freeze-dried version needs no refrigeration and can be used within minutes after swirling it in water.

Over the past five years, the military's special ops units in the Army, Navy, Air Force and Marines have received about 1,000 kits of the freeze-dried plasma, including 430 this year. While specific numbers on usage are scarce, the U.S. Special Operations Command said it had been used at least 24 times by Green Berets and other special operations teams in the past five years. Of those treatments, 15 patients survived long enough to be transferred to a hospital.

U.S. forces used freeze-dried plasma in World War II, but quit after it was linked to hepatitis outbreaks. In the years since, the safety testing of it improved and for years militaries including the French, Germans, Norwegians and Israelis have used it.

Army Special Operations medics saw it in use and said they wanted it too. The U.S. military currently gets its supply from the French, whose plasma is made from volunteer donors. It has a shelf life of about two years.

The U.S. is using the French product as a stopgap while Teleflex Inc. partners with the Army to win Food and Drug Administration approval by 2020. The slow pace led some in Congress to propose giving the Pentagon the ability to circumvent the FDA and allow emergency approval of new medical devices or drugs to treat troops, while other lawmakers propose speeding up FDA approvals for military medical products.

Teleflex is shooting to buy its donated plasma from blood banks and produce enough for the armed services and civilian emergency rooms in what is projected to be $100 million-a-year market.

Whether it's an accident victim arriving at a rural Texas hospital without a blood bank or a mass casualty event such as the Las Vegas shooting massacre, powdered plasma could be crucial, said Cannon, who now teaches surgery at the University of Pennsylvania's hospital.

"This is the ideal situation for FDP use -- first responders and in emergency departments swamped with bleeding patients -- especially when the supply of conventional plasma becomes depleted," Cannon said.