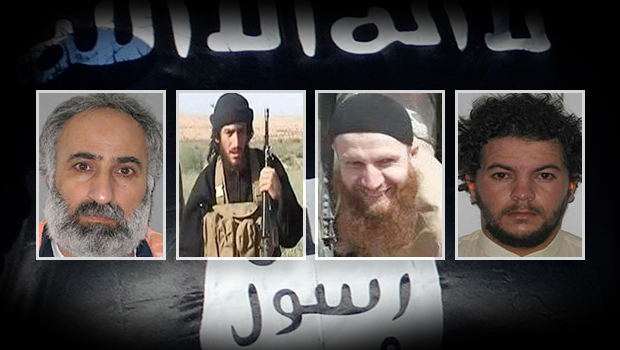 WASHINGTON -- The Obama administration is offering rewards of up to $20 million for information leading to the whereabouts of four top leaders of the Islamic State of Iraq and Syria (ISIS).

Through its Rewards for Justice program, the State Department announced Tuesday that it would pay up to $7 million for information on Abd al-Rahman Mustafa al-Qaduli, up to $5 million each for Abu Mohammed al-Adnani and Tarkhan Tayumurazovich Batirashvili and up to $3 million for Tariq Bin-al-Tahar Bin al Falih al-'Awni al-Harzi.

According to the department, Qaduli is a senior ISIS official who originally joined al Qaeda's affiliate in Iraq, Adnani is an official ISIS spokesman, Batirashvili is a battlefield commander in northern Syria and Harzi is the group's leader for the border region between Syria and Turkey.

According to a State Department release announcing the rewards, Harzi has helped to raise funds from Gulf-based donors for ISIS and has recruited and facilitated the travel of ISIS fighters. As of late 2013, he was overseeing the militant group's "suicide bomber facilitation pipeline," the State Department said.