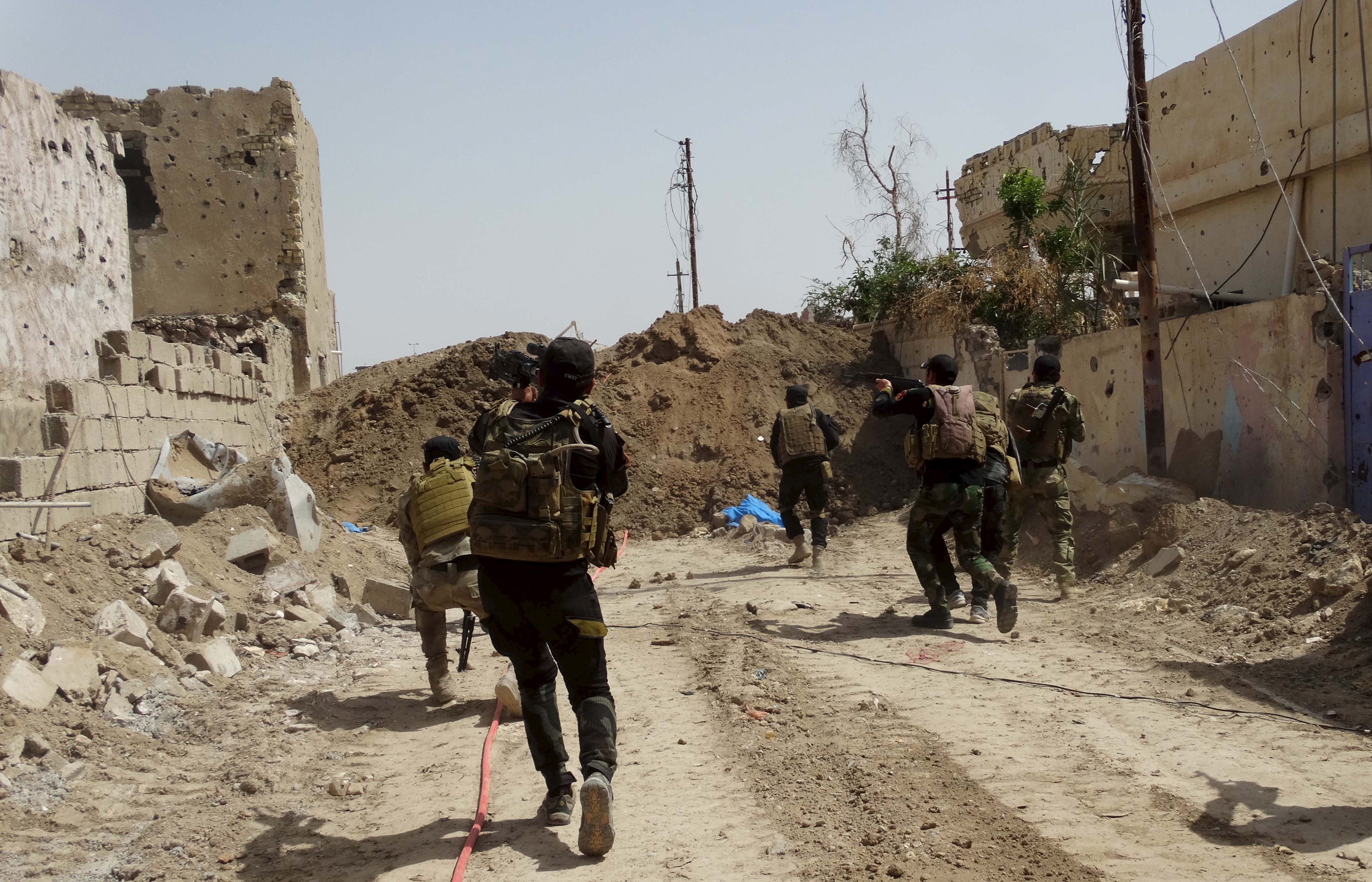 A Pentagon spokesman, Col. Steve Warren, estimated that a half dozen tanks were abandoned, a similar number of artillery pieces, a larger number of armored personnel carriers and about 100 wheeled vehicles like Humvees. He said some of the vehicles were in working condition; others were not because they had not been moved for months.

This repeats a pattern in which defeated Iraq security forces have, over the past year, left behind U.S.-supplied military equipment, prompting the U.S. to destroy them in subsequent airstrikes against ISIS forces.

Asked whether the Iraqis should have destroyed the vehicles before abandoning the city in order to keep them from enhancing the ISIS army, Warren said, "Certainly preferable if they had been destroyed; in this case they were not."

Warren also said that while the U.S. is confident that Ramadi will be retaken by Iraq, "It will be difficult."

The fall of Ramadi has prompted some to question the viability of the Obama administration's approach in Iraq, which is a blend of retraining and rebuilding the Iraqi army, prodding Baghdad to reconcile with the nation's Sunnis, and bombing ISIS targets from the air without committing American ground combat troops.

"The president's plan isn't working. It's time for him to come up with overarching strategy to defeat the ongoing terrorist threat," House Speaker John Boehner said.

"It's something that he's talking about with his national security team just about every day, including today," Earnest said.

Derek Harvey, a retired Army colonel and former Defense Intelligence Agency officer who served multiple tours in Iraq, says that while the extremist group has many problems and weaknesses, it is "not losing" in the face of ineffective Sunni Arab opposition.

"They are adaptive and they remain well armed and well resourced," Harvey said of the militants. "The different lines of operation by the U.S. coalition remain disjointed, poorly resourced and lack an effective operational framework, in my view."

One alternative for the Obama administration would be a containment strategy - trying to fence in the conflict rather than push ISIS out of Iraq. That might include a combination of airstrikes and U.S. special operations raids to limit the group's reach. In fact, a Delta Force raid in Syria on Friday killed an IS leader known as Abu Sayyaf who U.S. officials said oversaw the group's oil and gas operations, a major source of funding.

Officials have said containment might become an option but is not under active discussion now.

Gen. Martin Dempsey, chairman of the Joint Chiefs of Staff, issued a written statement Monday that suggested Ramadi will trigger no change in the U.S. approach.

"Setbacks are regrettable but not uncommon in warfare," Dempsey said. "Much effort will now be required to reclaim the city."

It seems highly unlikely that Obama would take the more dramatic route of sending ground combat forces into Iraq to rescue the situation in Ramadi or elsewhere. A White House spokesman, Eric Shultz, said Monday the U.S. will continue its support through airstrikes, advisers and trainers.

The administration has said repeatedly that it does not believe Iraq can be stabilized for the long term unless Iraqis do the ground fighting.

Pentagon officials insisted Monday the current U.S. approach to combating ISIS in Iraq is still viable and that the loss of Ramadi was merely part of the ebb and flow of war, not a sign that ISIS had exposed a fatal weakness in the Iraqi security forces and the U.S. strategy.

"We don't really have a strategy at all," former Defense Secretary Robert Gates said Tuesday on MSNBC. "We're basically playing this day by day."

Gates, who headed the Pentagon for Obama as well as President George W. Bush's administration before that, said "right now, it looks like they're (Iraq) going the way of Yugoslavia," suggesting an eventual breakup of the state.

The Institute for the Study of War, which closely tracks developments in Iraq, said Ramadi was a key ISIS victory.

"This strategic gain constitutes a turning point in ISIS' ability to set the terms of battle in Anbar as well to project force in eastern Iraq," the institute said.

Leaders gather for biodiversity summit: "We are committing suicide by proxy"