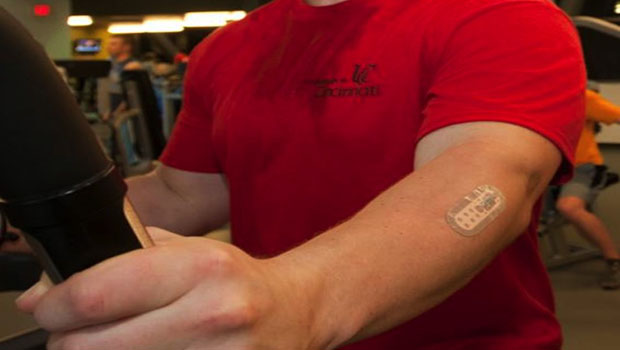 Blood tests may be the current standard method of tracking certain indicators of a person's health, but a new project led by the U.S. military could change the way health is monitored.

It turns out that many of the same indicators of health that flow in human blood are also present in sweat. The U.S. military project aims to develop skin "biosensors" that track what is flowing in the sweat of soldiers, to monitor their health and improve their performance. The high-tech devices, which look and feel like adhesive bandages, could be used to collect real-time measurements, such as heart rate, respiration rate and hydration, the researchers said.

"It's getting away from the concept of, you go to the hospital, they take a 10-milliliter vial of blood and a couple of hours or days later come back with the answer," said Josh Hagen, a chemical engineer for the Air Force Research Laboratory's 711th Human Performance Wing at the Wright-Patterson Air Force Base near Dayton, Ohio. [Bionic Humans: Top 10 Technologies]

The sensors -- flat, electronic chips that are embedded into bandages -- are designed to record health information that can be downloaded onto smartphones and computers. The military wants to use this technology to learn how best to deploy its soldiers and how to keep them functioning at peak performance.

Researchers at the Air Force Research Lab (AFRL) started mulling the idea in 2009, when Morley Stone, the chief scientist of the 711th Human Performance Wing, shared a picture of a transdermal patch -- an adhesive patch that delivers drugs to the bloodstream -- and suggested they use a similar device to monitor more details about the body.

Vital signs are important, but the AFRL is also interested in looking atbiomarkers that indicate stress or fatigue, Hagen told Live Science. These biomarkers could include measurements of dopamine (a chemical in the brain associated with pleasure), cortisol (a stress hormone) or other potential biomarkers. These chemicals and hormones are well studied in the blood, but how they appear in sweat is not as well understood.

A breakthrough came in 2008, when Esther Sternberg, a former researcher at the National Institutes of Health who is now the research director for the Arizona Center for Integrative Medicine at the University of Arizona in Tucson, led a study on sweat biomarkers that can be used to indicate depression. She discovered that the biomarkers could be found in sweat at almost identical concentrations as found in blood.

Hagen recalled that, after reading the paper, he pulled out a 1954 journal article about the chemical composition of sweat, which suggested that anything found in blood that can dissolve in water will show up in equivalent concentrations in sweat. Researchers at the AFRL decided to test the concept.

The first challenge was to make the sensors small enough to wear, the researchers said. Transistors can be tiny these days, making them easy to place on a soldier's body. The AFRL is integrating the electronics into materials already designed with "skin wearability" in mind, such as Band-Aids.

The key is to make the silicon-based electronic chips interchangeable, based on what needs to be measured. Each sensor should be able to look for specific biomarkers in sweat, but prototypes could include multiple sensors, depending on what is required, Hagen said.

The small bandage could be placed somewhere on the body -- figuring out where the sensors work best will be part of tests scheduled for next year. The testing phase will measure electrolytes, which the body excretes in sweat, giving indications of a person's hydration level. Electrolytes are detectable in sweat at a threshold that is higher than other potential biomarkers, which makes them a good test case, Hagen said.

So far, the project is expected to cost millions of dollars. But once working biosensor prototypes are available, the military wants to make the technology available for civilian applications, in order to make individual units more affordable, the researchers said.

The benefits for civilians could be groundbreaking, Hagen said. Athletes could monitor their performance in real time to meet workout goals, while children or people who are afraid of needles could use these biosensors to glean information normally obtained through blood tests, the researchers said.