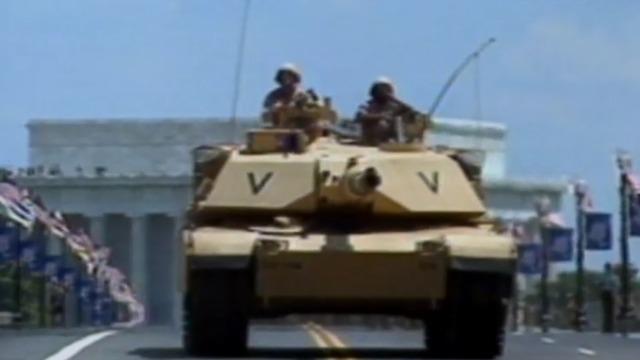 America's military edge is diminished, and in some cases erased – just as rival countries are getting savvier, stronger and more aggressive, according to a new analysis by a panel of former security officials and military experts. The stark conclusion: America could lose the next war it fights.

"America's ability to defend its allies, its partners and its own vital interests is increasingly in doubt," the report's authors wrote. "It might struggle to win, or perhaps lose, a war against China or Russia."

"Russia and China are challenging the United States, its allies and its partners on a far greater scale than has any adversary since the Cold War's end," the authors wrote. "If the United States had to fight Russia in a Baltic contingency or China in a war over Taiwan," the report warned.

Adversaries have studied U.S. military strategies post-9/11 – and learned how to counter them, said commission co-chair Eric Edelman, in an interview with Intelligence Matters host and CBS News senior national security contributor Michael Morell, who is also among the members of the commission and who helped write its report.

"They've learned from what we've done. They've learned from our success," said Edelman, former Under Secretary of Defense for Policy. "And while we've been off doing a different kind of warfare, they've been prepared for a kind of warfare at the high end that we really haven't engaged in for a very long time. What that means is that we can't fight traditionally, the way we have fought," he said.

The commission identified a set of six trends it said had fundamentally altered the strategic environment now facing the United States:

"We have basically been underfunding the Defense Department for quite a period of time," Edelman said. "I think there's been a disposition to believe that we spend so much money on defense [that] we should be able to deal with all comers. But what I think people have lost sight of is that the international environment has just become so much more complicated."

The commission called for an increase in the defense budget of between 3-5 percent above inflation, or else "DOD should alter the expectations of the strategy and America's global strategic objectives."

The report also recommended an independent commission be appointed to review U.S. cyber policy. "It is painfully clear that America is not competing or deterring its adversaries as effectively as it should in cyberspace," the report said.

"We've got to match the kind of intellectual firepower they're bringing to the problem with that kind of firepower of our own," Edelman told Morell.

Previous defense strategy reviews had already issued warnings that America was risking national security crises if it did not better maintain or, in some cases, immediately bolster its military and operational capabilities.

The 2018 commission said, however, that it believed America had already "reached the point of a full-blown national security crisis."

"In this report," Edelman said, "I think what we had to wrestle with was the consequences of all those warnings having been ignored."

The Defense Department said in a statement that it welcomed the release of the report and said it had "engaged extensively with the Commission throughout its deliberations." It said that the report's description of the security environment faced by the U.S. is "a stark reminder of the gravity of these issues, and a call to action." The Defense Department's statement went on to say it would "carefully consider each of the recommendations put forward by the Commission as part of continuing efforts to strengthen our nation's defense.

The commission's co-chairs will testify about their findings before the Senate and House Armed Services Committees about the report's contents later this month.

Russia's war in Ukraine and the impact of declassified intelligence
More