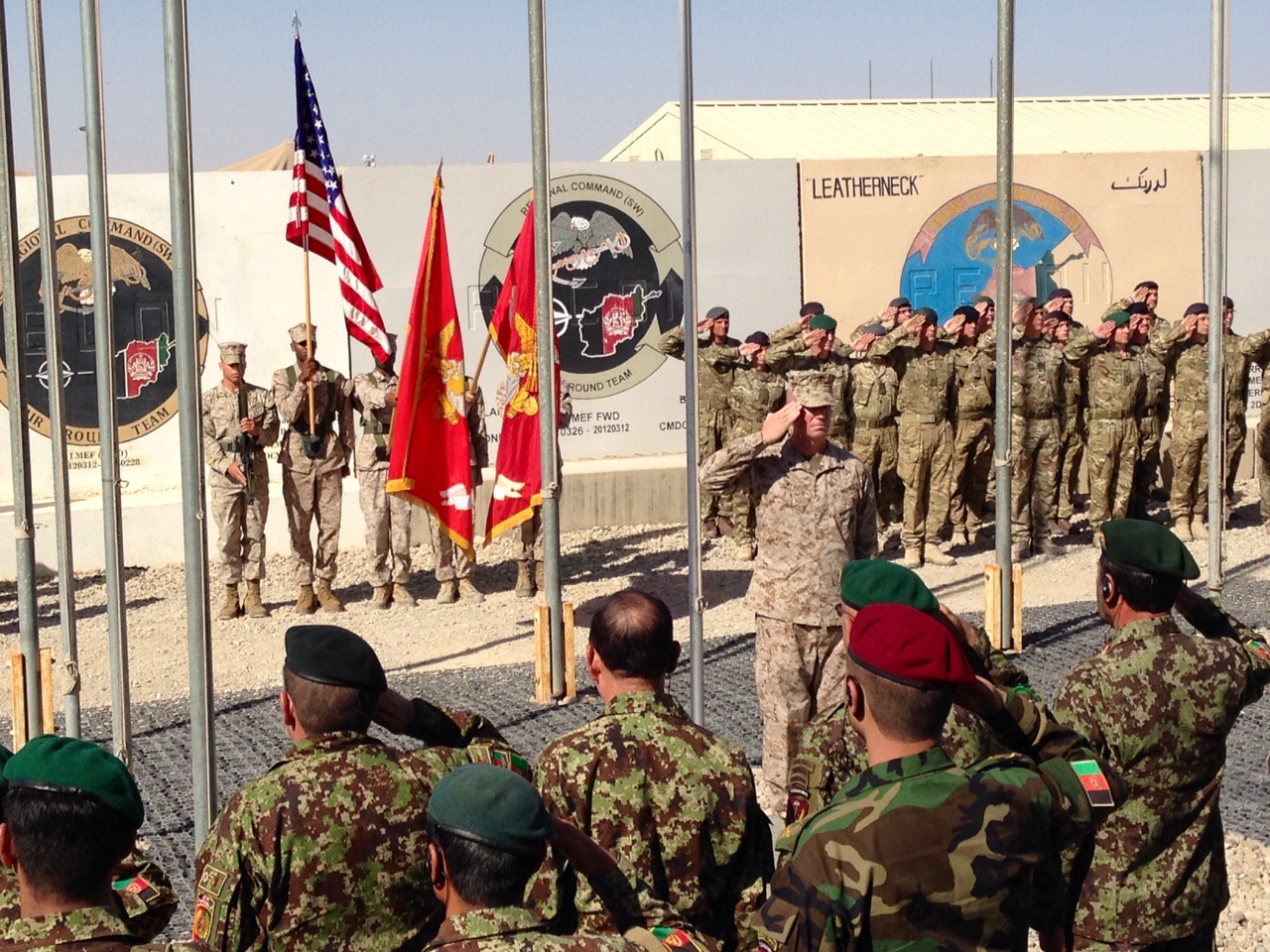 CAMP LEATHERNECK, Afghanistan - In a ceremony Sunday morning in dusty desert sunlight, U.S. Marines and British combat troops officially marked the end of their operations in Afghanistan, transferring Camps Leatherneck and Bastion to Afghan control. As national anthems from the three countries played, service members from all three countries stood at attention. The Marine flags were ceremoniously furled and cased, in recognition of the end of mission.

"This transfer is a sign of progress," said Brigadier Gen. Daniel D. Yoo, Commander of Regional Command South West. "It's not about the coalition, it's really about the Afghans and what they've achieved over the last 13 years. What they have done here is truly significant."

Every single combat Marine and British troop will soon board planes to head home - the exact date has been withheld for security reasons. It's a milestone in Helmand, the deadliest province for coalition forces throughout the war, with more than 940 troops killed, including 360 Marines. Five have died this year.

"When you think about the cost (of this war) it's been expensive, and I'm not talking about the monetary costs," said Yoo. A hallway in the command post here had been lined with photos of the Marines who died here. Those pictures have since been packed up.

"Every one of those faces on the wall were not victims," said Yoo. "They were volunteers and they would come back again and again because they believed in the mission."

Helmand is the world's largest supplier of poppy, the key ingredient in heroin, and many villages are still fiercely contested by the Taliban for control of that trade.

The American drawdown here has been ongoing since 2011. The Marines used to run 143 forward operating bases in the province-- in the last three years they've transferred control of 91 to Afghan troops and shuttered the other 52. And they've been tackling the gargantuan task of shutting down Camp Leatherneck for the last three deployments.

Col. Doug Patterson, head of logistics here, said its been even more difficult than shutting down U.S. operations in Iraq. "Getting equipment out of a landlocked country is difficult and expensive," he explained. "We have to fly or drive everything out of here."

Today, Camp Leatherneck is a near ghost town, littered with crates and boxes. Young infantrymen pack rucksacks in between their duties. Their tasks have changed over the last three years: no more foot patrols, no more fighting. These days there's barely any movement outside the wire. Sitting around eating an MRE after a game of football, one young Marine explained that while their mission has changed, he's not bored. "We guard the perimeter everyday and monitor the locals," he said. "Sure, it's not that exciting, but we had enough close calls earlier on. Now it's just nice to have a routine."

The troops from the 1st Batallion, 2nd Marine Regiment out of Camp Lejeune have the unique distinction of being the last Marines in Afghanistan, and they take pride in that. Their tours were to end in February; they'll be home well in advance of that.

The documents have already been signed and Camp Leatherneck's massive selection of keys handed over to the Afghans. What equipment wasn't shipped back to the US (or destroyed), has been given to them -- $230 million worth of buildings and real estate, including a new 64,000 square foot state-of-the-art headquarters, built over three years at a cost of $34 million and never used by the Americans.

For the last two years the Marines have been working as trainers and advisors, helping the Afghans develop bomb detection and medical skills, modernizing their capabilities. In this year's summer fighting season, no coalition ground troops were involved. The Marines provided attack helicopter support as the Afghans fought the Taliban, but never fired a shot. It was simply a show of force.

"We lift off confident in the Afghans to secure the region," said ISAF Commander Lt Gen. Joseph Anderson at this morning's ceremony. "The mission has been complex, difficult and dangerous, everyone has made tremendous sacrifices but those sacrifices have not been in vain."

As they prepare to leave, Marine commanders here are confident in the Afghan Army's ability to control the region. And they hope - even resolve - that they won't be back.