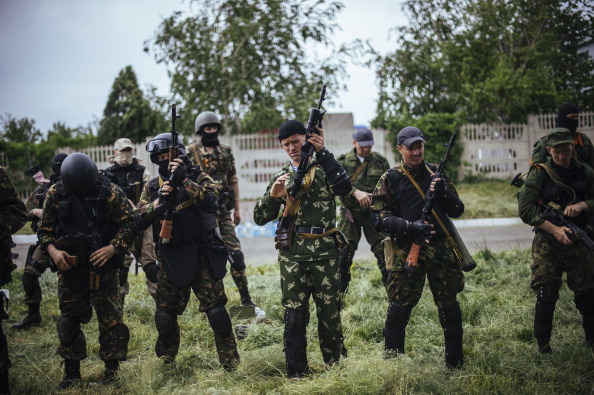 GENEVA -- A steady rise in killings, torture and abductions by pro-Russia armed groups in eastern Ukraine has claimed hundreds of lives since last month, U.N. monitors in the region said Wednesday.

"A climate of lawlessness prevails in the east with an increase in criminality, killings, abductions and detentions by the armed groups," U.N. Assistant Secretary-General for Human Rights Ivan Simonovic said.

At least 356 people, including 257 civilians, have been killed since May 7, according to the 34 monitors with the U.N. human rights office. Among those casualties are 86 Ukrainian military personnel, including the 49 crew and troops who died when a Ukrainian military transport plane was shot down by separatists last week. The other 13 dead were not specified.

There have been more than 200 reports of torture, the new report says, and 81 people were being held on June 7 as the deadly conflict raged in eastern Ukraine between pro-Russia separatists and the government in Kiev.

"We're talking about a reign of fear, if not a reign of terror, in those pocket areas," Gianni Magazzeni, head of the rights office's European department, told reporters.

U.N. human rights chief Navi Pillay said in the report Wednesday that a "climate of insecurity and fear" has displaced 34,000 people, nearly half in Ukraine's eastern regions of Donetsk and Luhansk, which have declared independence from Kiev.

"The escalation in criminal activity resulting in human rights abuses is no longer limited to targeting journalists, elected representatives, local politicians, civil servants and civil society activists," the report says. "Abductions, detentions, acts of ill-treatment and torture, and killings by armed groups are now affecting the broader population of the two eastern regions."

Simonovic said the government reported that armed groups in the east abducted 387 people in the east from April to June 7, including 39 journalists. He said U.N. monitors were able to confirm 222 abductions, including four people who have been killed, 137 who have been released and 81 who remain in detention.

Magazzeni said monitors found that many people are "so fearful for their lives that they would not even want to dare to vote if they had a chance to do so."

At the same time, Simonovic said, there has been an increase in reports of enforced disappearances and excessive use of force during Ukrainian government security operations "that have led to casualties among civilians, which we continue to investigate."

Simonovic told a briefing on the report at the International Peace Institute in New York that representatives of the self-proclaimed Donetsk People's Republic have for the first time acknowledged that among their fighters are some volunteers from Russia, most from Chechnya or Cossacks.

"This, of course, shows a clear danger of a possible spillover of the current crisis in eastern Ukraine," he said.

He called a recommendation that Ukrainian authorities should carry out anti-terrorist operations "in accordance with international standards" hypocritical and outrageous.

"In fact, this can be interpreted as an indulgence for the continued extermination of civilians and escalation of the conflict," Lukashevich said in a statement.

Simonovic said the U.N. is not "neutral" on human rights because it always sides with victims and against perpetrators. But he said "we are impartial, which means that we always treat all victims and all perpetrators the same - no matter of their ethnicity or their political affiliation. We try to do the same in Ukraine."