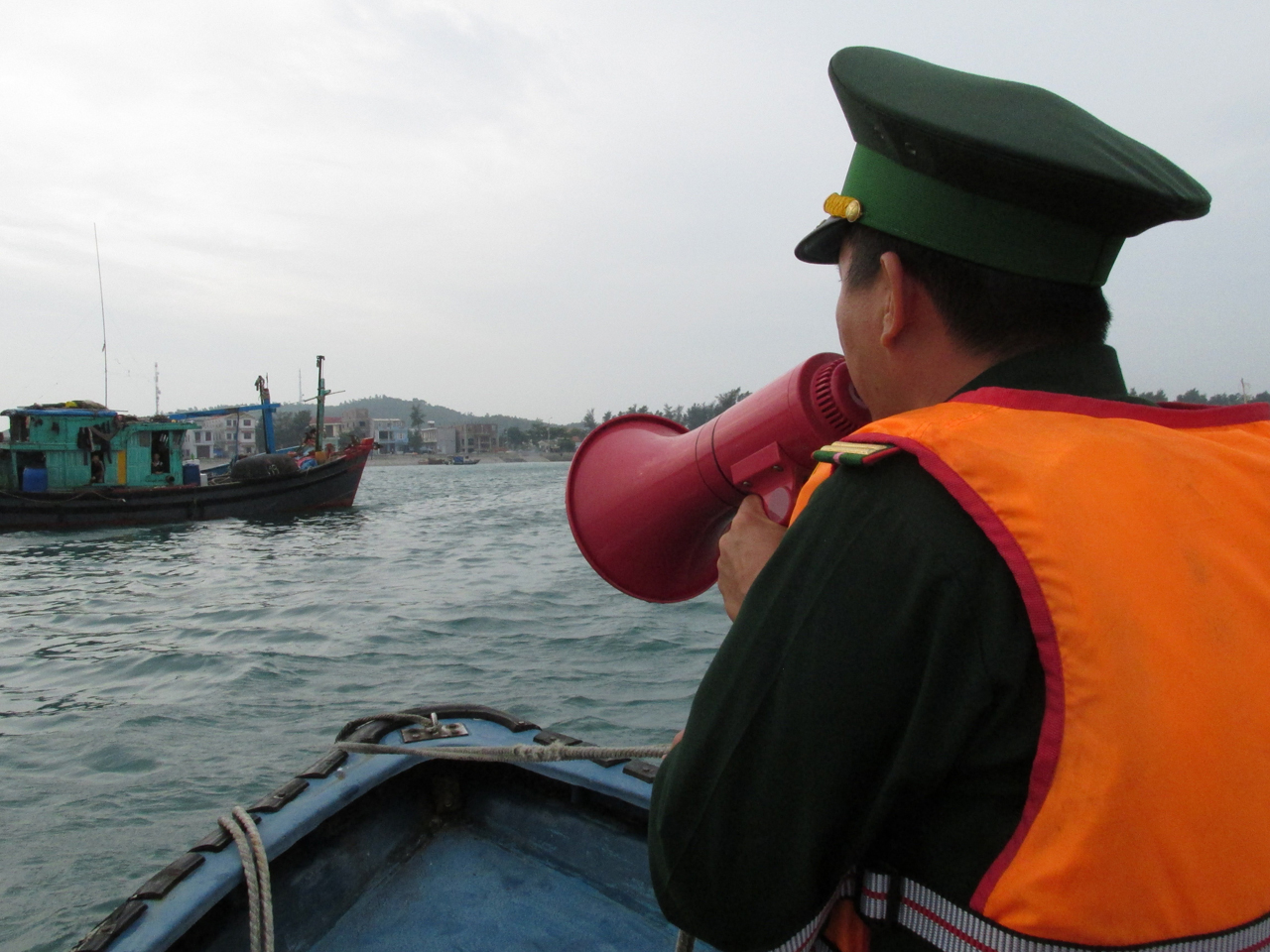 TACLOBAN, Philippines A weakened Typhoon Haiyan slammed into northern Vietnam after devastating the Philippines, where one of the deadliest storms in history is believed to have killed thousands in one city alone.

Some 600,000 people had been evacuated in Vietnam, where at least six deaths were reported. The category 1 storm carried sustained winds of 85 mph when it hit near Ha Long Bay.

In the Philippines, the government and international relief agencies were trying to get emergency aid to the worst-hit areas. On Leyte Island, as many as 10,000 people were feared dead in Tacloban, the provincial capital.

President Obama pledged U.S. aid in the wake of the typhoon, which is known as Yolanda under the Philippine naming system.

"Michelle and I are deeply saddened by the loss of life and extensive damage done by Super Typhoon Yolanda. But I know the incredible resiliency of the Philippine people, and I am confident that the spirit of Bayanihan will see you through this tragedy," Mr. Obama said in a statement, using he Filipino word for community spirit.

"The United States is already providing significant humanitarian assistance, and we stand ready to further assist the Government's relief and recovery efforts. Our thoughts and prayers go out to the millions of people affected by this devastating storm," he said.

The U.S. military dispatched water, generators and a contingent of Marines to the worst-hit city along the country's remote eastern seaboard, the first outside help in what will swell into a major international relief mission in the coming days. Two U.S. C-130 transport planes flew from Manila's Vilamor air base to Tacloban.

Haiyan hit the eastern seaboard of the Philippines on Friday and quickly barreled across its central islands, packing winds of 147 mph that gusted to 170 mph, and a storm surge of 20 feet.

The typhoon's powerful winds and giant waves washed away everything in its paths. In Tacloban, corpses hung on trees, lay on sidewalks or remained trapped in flattened buildings.

Adding to the chaos, desperate survivors were looting grocery stores and gas stations in search of food, fuel and water.

"There is looting in the malls and large supermarkets. They are taking everything, even appliances like TV sets. These will be traded later on for food," said Tacloban city administrator Tecson John Lim.

He said there was nothing officials could do to stop the looting.

"We don't have enough manpower. We have 2,000 employees but only about 100 are reporting for work. Everyone is attending to their families," he said.

"On the way to the airport we saw many bodies along the street," said Philippine-born Australian Mila Ward, 53, who was waiting at the Tacloban airport to catch a military flight back to Manila, about 360 miles to the northwest. "They were covered with just anything - tarpaulin, roofing sheets, cardboard." She said she passed "well over 100" bodies.

In one part of Tacloban, a ship had been pushed ashore and sat amid damaged homes.

Blocked roads and damaged airports were making it difficult for relief workers as they raced to deliver desperately needed tents, food and medicines to worst-hit areas.

"This area has been totally ravaged," said Sebastien Sujobert, head of the International Committee of the Red Cross in Tacloban. "Many lives were lost, a huge number of people are missing, and basic services such as drinking water and electricity have been cut off."

Haiyan inflicted serious damage to at least six of the archipelago's more than 7,000 islands, with Leyte, neighboring Samar Island, and the northern part of Cebu appearing to bear the brunt of the storm. About 4 million people were affected by the storm, the national disaster agency said.

On Leyte, regional Police Chief Elmer Soria said the provincial governor had told him there were about 10,000 deaths there, primarily from drowning and collapsed buildings. Most were in Tacloban, a city of about 200,000 that is the biggest on the island.

On Samar, Leo Dacaynos of the provincial disaster office said 300 people were confirmed dead in one town and another 2,000 were missing, with some towns yet to be reached by rescuers. He pleaded for food and water, adding that power was out and there was no cellphone signal, making communication possible only by radio.

Video from Eastern Samar province's Guiuan township - the first area where the typhoon made landfall - showed a trail of devastation. Many houses were flattened and roads were strewn with debris and uprooted trees. The ABS-CBN video showed several bodies on the street, covered with blankets.

"Even me, I have no house, I have no clothes. I don't know how I will restart my life, I am so confused," an unidentified woman said, crying. "I don't know what happened to us. We are appealing for help. Whoever has a good heart, I appeal to you - please help Guiuan."

The Philippine National Red Cross said its efforts were hampered by looters, including some who attacked trucks of food and other relief supplies it was shipping to Tacloban from the southern port of Davao.

Tacloban's two largest malls and grocery stores were looted, and police guarded a fuel depot. About 200 police officers were sent into Tacloban to restore law and order.

With other rampant looting reported, President Benigno Aquino III said he was considering declaring a state of emergency or martial law in Tacloban. A state of emergency usually includes curfews, price and food supply controls, military or police checkpoints and increased security patrols.

The massive casualties occurred even though the government had evacuated nearly 800,000 people ahead of the typhoon.

Aquino flew around Leyte by helicopter on Sunday and landed in Tacloban. He said the government's priority was to restore power and communications in isolated areas and deliver relief and medical assistance.

Challenged to respond to a disaster of such magnitude, the Philippine government also accepted help from abroad.

The United Nations said relief operations have begun but that access remained a challenge because some areas are still cut off.

Pope Francis led tens of thousands of people at the Vatican in prayer for the victims. The Philippines has the largest number of Catholics in Asia, and Filipinos are one of Rome's biggest immigrant communities.

The Philippines is annually buffeted by tropical storms and typhoons, which are called hurricanes and cyclones elsewhere. The nation is in the northwestern Pacific, right in the path of the world's No. 1 typhoon generator, according to meteorologists. The archipelago's exposed eastern seaboard often bears the brunt.

Even by the standards of the Philippines, however, Haiyan is a catastrophe of epic proportions and has shocked the impoverished and densely populated nation of 96 million people. Its winds were among the strongest ever recorded, and it appears to have killed many more people than the previous deadliest Philippine storm, Thelma, in which about 5,100 people died in the central Philippines in 1991.

The country's deadliest disaster on record was the 1976 magnitude-7.9 earthquake that triggered a tsunami in the Moro Gulf in the southern Philippines, killing 5,791 people.

Defense Secretary Voltaire Gazmin said Aquino was "speechless" when he told him of the devastation in Tacloban.

"I told him all systems are down," Gazmin said. "There is no power, no water, nothing. People are desperate. They're looting."

Tacloban, in the east-central Philippines, is near the Red Beach on Leyte Island where U.S. Gen. Douglas MacArthur waded ashore in 1944 during World War II and fulfilled his famous pledge: "I shall return."

It was the first city liberated from the Japanese by U.S. and Filipino forces and served as the Philippines' temporary capital for several months. It is also the hometown of former Filipino first lady Imelda Marcos, whose nephew, Alfred Romualdez, is the city's mayor.