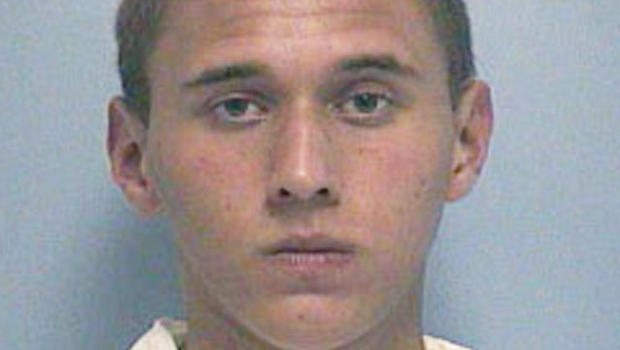 FORT PIERCE, Fla. - A Florida man convicted of killing his parents, and who then threw a party with their bodies still inside their house, was sentenced Thursday to life in prison without the possibility of parole.

Authorities said Tyler Hadley killed his parents, Mary Jo and Blake Hadley, in July 2011 when he was 17, then spent three hours cleaning up the blood before hosting a party. Hadley pleaded no contest in February to two counts of first-degree murder.

Hadley's attorney had argued for two 30-year sentences, to be served concurrently, with a review after 20 years.

On the night of the killing, police said, Hadley stopped at an ATM and then picked up some friends en route to the party, flashing about $5,000 in cash.

About 60 people gathered for a party at the family's Fort Pierce home, playing beer pong, smoking cigars and drinking. The victims' bodies were later found lying in their bedroom. Friends described Hadley as being in a good mood and hospitable during the party. One friend said Hadley had planned to hold a second bash the following night.

At the party that night, Hadley asked an unidentified friend to step outside to talk and told him about the killings. The friend was shown a bloody footprint in the garage and, ultimately, the bodies in the bedroom, police said. Word of the killings eventually made its way around the party, police said.

The friend tipped off police, leading to Hadley's arrest early the next morning.

Hadley told a friend interviewed by police that his father had punched him in the face several times, according to investigative files previously released by prosecutors. But a fellow inmate said Hadley told him he'd never been beaten or molested, the files stated, and the man's brother, Ryan Hadley, called his parents "awesome" and said his brother was a "pathological liar."

Evidence seized from the home hinted at some mental problems for the defendant, including a receipt for a mental health center and a bottle of an antidepressant medication, according to authorities. A fellow inmate has told police that Hadley has signed jailhouse autographs, has called himself "hammer boy," and says he has talked with the devil, according to the files released by prosecutors.

Authorities said the death penalty was not a sentencing option under law due to Hadley's age at the time of the deaths.