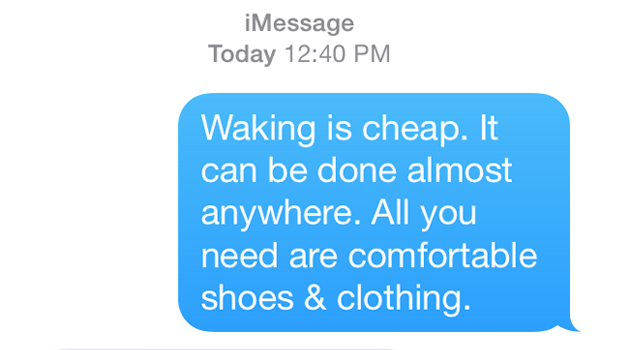 The text messages even helped many quit smoking, the researchers added.

The clinical trial provides some of the first evidence that simple, low-cost mobile communications programs and apps can help people adopt healthier habits, said study author Clara Chow, an associate professor at the University of Sydney Medical School and acting director of the cardiovascular division at the George Institute for Global Health.

"In our fast-paced society, patients are leaving hospitals so quickly now after suffering a heart attack. They are given so much information in hospital, and it's easy to become confused," Chow said.

The text messages "provide advice, support and encouragement in personalized bite-size chunks about making those behavior changes that are so difficult to make after a heart attack," she explained.

In the study, published in the Sept. 22/29 issue of the Journal of the American Medical Association, half of a group of 700 heart disease patients were assigned to receive four text messages each week for six months. Both groups started with similar heart risk factors, on average.

The messages were selected from a bank of messages by an automated computer messaging system that took each patient's individual health risks into account, the study authors said. For example, a smoker might receive messages that encourage quitting, or those struggling with their weight might get tips on eating right or exercising.

"Messages were often personalized with [a] name," Chow said. "For example, 'Hi Mike, don't forget physical activity is good for you! It reduces your risk of diabetes, heart attack, stroke and their complications.'"

After six months, levels of "bad" cholesterol were lower in participants who received text messages compared with those who didn't (the "control" group), the researchers found. Those on the text message system also had lower blood pressure levels and lower body mass index (a measurement of body fat based on height and weight).

Both groups started with about 53 percent smokers. By the end of the six months, there were 26 percent smokers in the text message group, compared with 43 percent in the control group, the findings showed.

The study shows that technology can help doctors better guide patients in making what can be very difficult changes to their everyday life, said Dr. Zubin Eapin, an assistant professor at Duke Medical Center, in Durham, N.C.

"Creating and sustaining long-term behavior change is difficult in all aspects of life, and doing what it takes to be healthy is no exception," said Eapin, who co-wrote an editorial that accompanied the study. "The decisions we make today for our own health -- eating and exercising well, quitting smoking, taking medications as prescribed -- are often far removed from the rewards or consequences."

Dr. Elliott Antman, past president of the American Heart Association, called the study "an excellent start in the right direction."

"This is what we need to see to understand how to use mobile technologies to effectively modify behavior so individuals lead a more healthy lifestyle," said Antman, who is a professor at Harvard Medical School in Boston. "There are many health-related apps, and only a few have undergone any kind of rigorous evaluation. This program has been proven effective using gold-standard methodology."

However, Antman added that the study only lasted for six months, and it remains to be seen if patients will be able to stick with their heart-healthy lifestyles.

"The question, of course, will be, is this sustainable?" he said. "Repeating the same text messages again and again may not be enough. You may have to change up the messages, to remain effective."