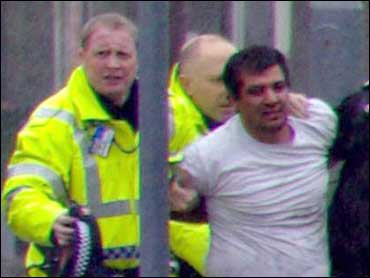 British intelligence services also believe that the failed car bombings in London and Glasgow bear the fingerprints of al Qaeda in Iraq.

Intelligence sources tell CBS News that the people behind the attempts were directly recruited by Abu Hamza al-Muhajir, the present leader of the terror group's Iraq franchise.

Sources say that al-Muhajir recruited people for the plot between 2004 and 2005, while they were living in the Middle East, upon orders from then-al Qaeda in Iraq leader Abu Musab al-Zarqawi.

Al-Muhajir was told to recruit young men who could easily move into Western countries, assimilate and lay low until the time came to attack. Britain has a fast-track visa program for medical students which makes it easier for them to enter the country.

The belief that this small cell of militants was recruited purposely by a major terror organization for their specific qualifications differentiates the group from the cell of "homegrown" attackers who were behind the bloody July 7, 2005 attack that left 52 people dead on London's transport network.

All the suspects now being held are foreign doctors, or health workers who have worked in Britain, reports CBS News foreign correspondent Mark Phillips. For potential terrorists, it was a useful cover.

Not only was it frighteningly easy for the bombers to get into the country, getting the ingredients for their bombs was surprisingly easy as well. They just drove about five miles to their local home improvement store, where they could buy the gas cylinders for about $60 each.

Iraq's national security advisor has been warning American and British authorities that al Qaeda has been infiltrating operatives in Europe, reports CBS News foreign correspondent Sheila MacVicar. And he said that al Qaeda is changing its style, seeking the highly intelligent and well educated — just like the doctors involved in this terror plot.

Sources close to the investigation tell CBS News that two or three arrests were likely to be seen in Britain by the end of the week and that some of the arrests will be of British nationals.

There have been a number of security scares since the failed car bombings, the latest coming Tuesday afternoon with authorities evacuating Terminal 4 at London's Heathrow Airport for five hours.

"A suspect bag was identified shortly before midday in Terminal 4," said a statement released by the British Airports Authority.

"As an extra precaution, it was decided to perform secondary searches on all departing passengers at the aircraft gate," which necessitated the evacuation of the terminal, the statement added. Authorities "stood down" the security situation five hours later and reopened the terminal, according to a later statement from the BAA.

(Gareth Cattermole/Getty Images)
Tuesday morning London police briefly blocked traffic around Hammersmith Station, in west London (seen at left), due to a suspicious package. The situation was quickly resolved by a controlled explosion.

No explosives were found and morning rush hour traffic was soon allowed back through the area.

The eighth arrest confirmed as part of the bomb plot investigation was made Monday in Brisbane, Australia. The 27-year-old man is also a doctor who had been working in Liverpool, England until a few months ago, according to CBS News sources.

Britain's Sky News identified the man as Mohammed Haneef, and reported that was arrested at Brisbane's airport as he attempted to board a flight with a one-way ticket. Sky said officials had refused to confirm reports that Haneef was bound for India, via Kuala Lumpur, Malaysia.

Police were executing a number of search warrants across Queensland state, Australia including one at the hospital where the suspect worked recently, Australian authorities said. More arrests were expected.

Speaking in Canberra Tuesday, Australian Prime Minister John Howard confirmed the doctor arrested is an Indian national, and he also revealed that a second doctor was being interviewed in relation to information given to counterterror authorities by the first suspect.

Officials say both doctors worked at the Gold Coast Hospital in southeast Queensland and were both recruited from Liverpool.

The Indian doctor was arrested at the state capital Brisbane airport as he was about to leave the country Monday night. The second doctor was being interviewed by police Tuesday but has not been arrested.

A second doctor in Australia who was questioned over the failed attacks has been released without charge, Australia's police chief said Wednesday.

Meanwhile, a bomb disposal team carried out a controlled explosion Tuesday morning on a suspicious car parked outside the Forth Street Mosque in Glasgow, reported CBS News correspondent Elizabeth Palmer.

"There's absolutely no specific information to indicate that this vehicle is a threat, however we have been working very closely over the past few days with the bomb squad," Superintendent Stewart Daniels, of Strathclyde Police, told the British Broadcasting Corp.

Police said there was no indication that the mosque had any connection to the bombing attempt in Glasgow, or to two cars packed with gasoline and gas canisters discovered in London on Friday.

Investigators have searched 19 locations in Britain as part of the "fast-moving investigation" and arrested eight people, including a total of six trained as medical doctors, CBS News can confirm.

According to the British General Medical Council's register, a man named Bilal Talal Abdul Samad Abdulla was registered in 2004 and trained in Baghdad. Staff at the Glasgow hospital said Abdulla was a diabetes specialist.

Britain's The Independent and The Muslim News newspapers reported that a man arrested in Liverpool late Saturday was a 26-year-old doctor from Bangalore, India, who worked at Halton Hospital in Cheshire, northern England. Police would not immediately comment on the reports.

The Muslim News also said the Indian doctor had used the car, cell phone and Internet account of a fellow physician who had moved from England to Australia around a year ago. It said police had asked friends of the Indian for details about the man who went to Australia.

Yet another medical trail leads to Jordan, where Mohammad Asha — arrested Saturday in northern England — received his initial medical training.

The attempted attacks in London and Glasgow came as Britain was already on heightened alert, with the second anniversary of the July 7 bombings on the horizon.