Anthony Mason presents the story of two acclaimed photographers and how their pictures wound up side-by-side:

As friends, even as photographers, Jim Marshall and Timothy White made an odd couple.

White is a stylish shooter of celebrity portraits.

The gruff Marshall ("I only photograph artists I like, where I get the trust") has taken some of the most iconic shots in rock & roll.

"We would show up places and we'd be together, and it was sort of like, 'Why are these two guys together? It just didn't make sense!'" White laughed.

The book, called "Match Prints" (HarperCollins) is the product of Marshall and White's 24-year friendship.

It was a photograph White had taken of actor Robert Mitchum that started it all:

"My image of Robert Mitchum, which Jim just loved. He just really loved this picture a lot," said White. "And then, of course, [he] pulled out this image of Jim Morrison that was just uncanny. Just, you know, it was the exact same position, holding the cigarette the same way."

As they went through each other's work, they noticed more and more similarities. Marshall had shot Ray Charles . . . so had White.

"How much time did you spend going through pictures to see what you had in common?" Mason asked.

The book finally came together this year. Then in March, the day before the launch party . . . just days before he was due to be interviewed for this story . . . Jim Marshall died in his sleep in a New York hotel room. He was 74.

White was devastated: "I just miss my friend." 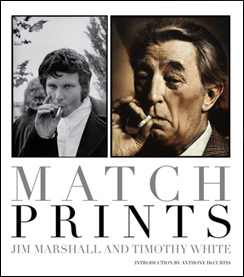 (HarperCollins)
But they decided to go ahead with the celebration.

"We had a lot planned that didn't end up the way we wanted it to end up, but what did happen was a real tribute to Jim," he said.

Danny Clinch showed his best clips of Marshall. Clinch, another photographer whom Marshall mentored, had been working on a documentary about him. He'd shot more than 50 hours of the photographer over the years.

Marshall also captured the musician who White referred to as "the other very famous Jim."

"Monterey Pop, 1967. The first time Jimi set his guitar on fire," white recalled. "In the Jimi Hendrix box set, there's a quote from Jimi saying, 'I turned to Jim Marshall and I said, Do you have film in your camera? Just be ready.' 'Cause Jim was in the pit like three feet from him just waiting."

"He had no family, no next of kin," Clinch said. "He always said that, like, his children were his photographs."

But to his colleagues he was family.

Marshall was famous for his generosity to other photographers.

"Is that unusual?" Mason asked.

"I think so," White replied. "I think most photographers are really caught up in their own world, or are also full of ego.

White and Marshall did get a chance to sign books together just before he died. Then Jim signed one for Timothy:

"And he just wrote, 'To my little bro.' and then, 'Copycat' underneath it, which I thought was kind of great. And that's really the last thing, you know, we did together."

Jim Marshall was famous for insisting on total access to his subjects. In Clinch's film he's heard asking, "I have complete access, right? And you talked to Bruce about that?"

He's probably up there now, a colleague said at a tribute, demanding all access at the pearly gates.