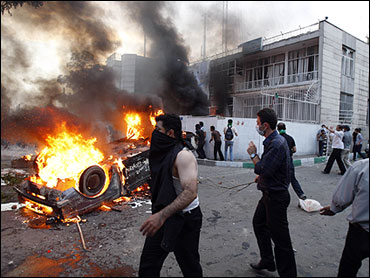 An opposition activist spreads word of an upcoming protest in the streets of Tehran. Another posts pictures of clashes between demonstrators and police.

As Iran's government cracks down on traditional media after the country's disputed presidential election, tech-savvy Iranians have turned to the microblogging site Twitter.

Its use to organize and send pictures and messages to the outside world - in real time as events unfolded - was a powerful example of how such tools can overcome government attempts at censorship.

"When I'm not connected to Twitter it means that I'm disconnected from the world because the state TV doesn't report many things!" wrote one Twitter user who identifies himself as "hamednz" and communicated with The Associated Press through e-mail. His profile says he lives in Rasht, a city to the north of Tehran near the Caspian Sea.

Like all the Twitter users in Iran who agreed to be interviewed for this story, hamednz did not want his identity revealed for fear of retribution from government authorities.

In Iran, as in many still-developing countries, Internet usage is mostly still a phenomenon of the affluent, the youth and city-dwellers - meaning Twitter and other networks are used mostly by the young and liberal - and may overemphasize their numbers while ignoring more-conservative political sentiments among the non-connected.

Twitter co-founder Biz Stone acknowledged the limited group of users in Iran, who don't necessarily represent the mainstream. "Because Twitter is still a nascent service the sentiment is likely narrow," Stone said in an e-mail Monday to The Associated Press.

"However, we noticed people creating accounts during the riots presumably because they heard Twitter was the most efficient way to discover and share what was happening in the moment," Stone wrote.

"Against all odds," says Sieberg, "they're taking their voices to the Internet and seem to be announcing, 'The revolution will be blogged." '

Twitter had planned to go down for 90 minutes Monday for maintenance, but rescheduled it citing "the role Twitter is currently playing as an important communication tool in Iran," according to a notice posted on its Web site. The maintenance will instead happen a day later, when it is 1:30 a.m. in Iran.

Iranians must outsmart government blocking to use Twitter, on which users post messages limited to 140 characters called "tweets."

Twitter and other social-networking sites remained blocked Monday in Iran. Users must go to other sites that post tweets for them and allow them to read tweets from others.

Facebook was used to organize people before the election, but it was also blocked after the vote. On Monday, the site was replaced with a message that said the page was blocked under a filtering policy.

"Since the election, we have heard reports that users in Iran are having difficulties accessing Facebook," said Barry Schnitt, Facebook spokesman. "This is disappointing, especially at a time when Iranians are turning to the Internet as a source of information about the recent election."

Cell phone service, which had been down in the capital since Saturday, was restored Sunday, but Iranians still could not send text messages from their mobile phones. Text messages are another way to tweet.

Judging by tweets since Friday's election - the censorship didn't even slow some of them down. Many then tweet to share their tactics.

"The fact that the government is not able to stop all of the information is really key," said Robin Gross, executive director of IP Justice, a San Francisco-based digital rights group. "They can only sort of censor in a patchwork way, and censorship by its nature has to be all or nothing."

Twitter has been used as an organizing tool to tell people about upcoming events such as this tweet Monday from a user identified as "alirezasha:" "today, 4pm a CALM protest with Karoubi and Mousavi/confirmed by Karoubi's campaign manager and VP."

Other users post pictures of protests or what appears to be government authorities chasing and beating protesters.

One Twitter user who identified himself only as Mohsen, speaking to the AP from Tehran, said while he's been using Twitter for about two years, he's intensified his "tweets" over the last few days.

He said he sends alerts about "what I see in the streets, about police hitting people, and people who are not police who are hitting Mir Hossein supporters," he said. "These are frames of horror and hate. I think one of the strategies the authorities are doing is stopping news and information, and I use whatever I can to stop them from doing that."

On Monday, the Twitter site showed topics that were getting the most attention, including "IranElection," "Mousavi" and "Tehran." In one 10-minute period, 12 users who identified themselves as being within 50 miles of Tehran posted Tweets.

Some media such as The Associated Press and others often monitor sites such as Twitter, looking for news tips and to assess the general mood.

Even actor Ashton Kutcher, one of Twitter's biggest fans, has weighed in on the elections. He tweeted: "I think that truely (sic) the only people that can change things in Iran are the Iranians themselves and they seem to be speaking their minds now."

Twitter has played a role in other world political events. This April, protesters of parliamentary elections in Moldova used Twitter and the Internet when mobile phones and cable news television stations went down. They rallied as many as 10,000 people to one demonstration.

Earlier this month, government censors in China shut down Twitter as well as other social networking and image-sharing Web sites as part of their attempt to block out news about the 20th anniversary of the Tiananmen Square massacre.

But some experts warn of overestimating Twitter's role. Censorship adds another layer of technology that people have to overcome.

For people following events in Iran from abroad on Twitter, it's easy to think that everyone is an outraged Mousavi supporter.

Gaurav Mishra, the 2008-09 Yahoo Fellow at Georgetown University, said he hasn't seen any evidence in past events such as the Moldova elections that Twitter was the dominant way people are organizing.

"It's sometimes difficult to differentiate the hype from the media," he said. "Just because people are tweeting about something doesn't mean that there's actually coordination involved."

THESE WEB PAGES HAVE THE MOST UP-TO-DATE INFO:

Scientists mapping Earth in 3D, from the inside out