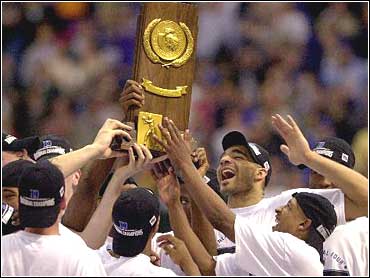 Coach K hugged him for what seemed to be an eternity, a farewell embrace for his national player of the year and team leader.

"It's complete," Duke's all-everything senior forward said. "All that's left for me is to ride off into the sunset on a white horse."

With a national title in his hand.

The top-ranked Blue Devils won their third championship - and second in the Metrodome - with an 82-72 victory over Arizona on Monday night.

With Battier and Duke's other All-American, Jason Williams, coming up big down the stretch, and sophomores Mike Dunleavy and Carlos Boozer playing key roles, Krzyzewski moved into impressive coaching company.


"Shane wasn't hitting his jump shot, but he comes up with two amazing offensive rebounds," Krzyzewski said. He was referring to two plays in the final 4 1/2 minutes when Battier, the national player of the year, scored after Arizona had closed within three points.

Battier played all 40 minutes, scoring 18 points, with 11 rebounds and six assists. He finished his career with 131 victories, tying Kentucky's Wayne Turner, who played from 1996-99, for the NCAA record.

"The thing with Duke, you pick your poison," Arizona coach Lute Olson said. "Sometimes it's going to be one guy, another time it's going to be someone else. The one consistent thing is that Shane Battier is going to have a great game because he just makes things happen. I don't think there's been ny question in anyone's mind about him being player of the year."

To get to this game, Duke (35-4) had to overcome a 22-point deficit in Saturday's semifinal win over Maryland. The last time the Blue Devils won it all, it was by 20 points over Michigan.

The loss ended Arizona's bittersweet season and kept the Wildcats (28-8) from matching their own record of beating three No. 1 seeds in the NCAA tournament, which they did when they won it all in 1997.

Loren Woods had 22 points and 11 rebounds to lead Arizona, the team that rebounded from a poor start and overcame the death of Olson's wife, Bobbi, on Jan. 1 to reach the championship game.

"All the emotions they had to go through and they withstood them and did a great job to get to the final game," Olson said. "It's tough. Someone's got to lose it. Duke is deserving. We gave them a good run and couldn't get it done."

Duke's other titles came in consecutive years, and the second in 1992 was won in this building after the same trip through the tournament Greensboro, N.C., Philadelphia and Minneapolis for the Final Four.

Dunleavy, playing in front of his father, Portland Trail Blazers coach Mike Dunleavy, led Duke with 21 points, 18 in the second half.

Williams, saddled with foul trouble, had 16 points on 5-for-15 shooting.

Duke is the first No. 1-ranked team to win the national championship since UCLA in 1995.

Dunleavy had three 3-pointers in an 11-2 run that put the Blue Devils up 50-39 four minutes into the second half.

Again, the Wildcats came back.

Four times Arizona got within three points. Three times it was Battier, the outstanding player of the Final Four, who responded for Duke.

"Most games we're able to get that run," Woods said. "We just couldn't today. They just beat us at our own game."

Duke, which set NCAA records this season for 3-pointers made and attempted, finished 9-for-27 from beyond the arc. Arizona really struggled from long range, finishing 4-for-22 with Jason Gardner missing all eight attempts.

Duke shot 47 percent from the field (30-for-64), well above the 38 percent Arizona's other opponents, including No. 1 seeds Illinois and Michigan State, shot during the tournament.

Arizona shot 39 percent (28-for-71), nowhere near the 50 percent mark the Wildcats were at for the first five games of the tournament.

"Somehow," Dunleavy said, "we were able to outlast them."