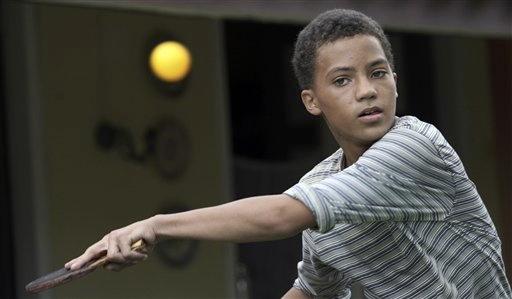 This column was written by Andrew Ferguson.

If you discount his magenta and burnt-orange hair, teased into long curls that dangle down the nape of his neck, Mitch Altman is a modest man, with a diffident manner. He's the sort of person who, if he has to use a cell phone in a public place, turns away and covers his mouth with his free hand, lest he bother someone. His modesty is not only charming and rare but also wholly unjustified. For Mitch is the founder, CEO, and co-owner (with his mom) of Cornfield Electronics, and he has invented the single greatest technological breakthrough of the past three-and-a-half centuries, at least. He has nothing to be modest about.

Mitch's invention is called TV-B-Gone. He carries one on his keychain, as, God willing, you will someday carry one on yours. It fits snugly in the palm, a near-weightless lump of black plastic. Its shape vaguely suggests the Batman logo. A tiny diode rests on the very tip of Batman's head, between his pointy bat ears. Press a button and from this diode a beam of invisible light escapes that can turn off any television -- any television -- within a radius of 45 feet.

Yes, yes, yes: Imagine the possibilities. You sit in a doctor's waiting room, casting your mind forward to the grisly procedures he has in store for you (you can almost hear the snap of the rubber gloves) and hung high above you in a corner near the ceiling, well out of reach, Maury Povich is interviewing an adulteress, her daughter, and her daughter's transgendered lover, as the studio audience whoops and yelps and stomps its hairy feet. You reach in your pocket and withdraw your key chain. You tilt Batman's head toward the screen: TV-B-Gone! And it's gone!

Or the airline has delayed your flight, again, and all you want is to go home, and as you pace the soulless terminal from one end to the other the voice of Wolf Blitzer trails you like a police siren, roaring out from the CNN television monitors which have been spaced every 10 yards, so you're never out of earshot. The TSA guards may have taken your Swiss Army Knife, but they've left you with your lump of plastic. You point and press. Wolf-B-Gone!

On the phone your girlfriend has whispered the ominous words, "We have to talk." You meet in a neutral bar, amid the ferns and gleaming brass. Yet you can scarcely hear a word she says for the soccer game blaring in Spanish from the inevitable television that no one is watching. Hasta la vista, televisión!

You will want to come up with your own scenarios. "I use mine in the Laundromat a lot," says Mitch, sitting in Cornfield's worldwide headquarters, which are in a one-bedroom walk-up near the corner of Castro and Market streets in San Francisco. Mitch lives nearby, and like many bachelors he spends a lot of time at the Laundromat.

"The TV is always on, whether there's anybody there or not. And really, the last thing you want to see while you're doing your laundry is things blowing up, reports of murders, crime and stuff. Or Dr. Phil." He shudders visibly. "I've never been in there when people are really watching it. They're distracted by it, but that's different. So when I pull out my TV-B-Gone and turn the TV off, they go back to their book, or they talk to each other, or they watch the laundry go round and round and round. Nobody ever gets annoyed."

It was under similarly prosaic circumstances that the idea for TV-B-Gone came to him. He was having dinner with friends in a neighborhood restaurant. Up in a corner near the ceiling a television screen flickered. The sound was muted, but Mitch and his friends found themselves turning their attention to it anyway -- an experience that every citizen of every country wired with electricity has had at one time or another.

"You could just feel this screen suck the energy right out of the conversation," he says. "I thought, 'Gee, I wish I could turn that thing off.'"

A friend was thinking the same thing. "What we need," said his friend, in a burst of inspiration, "is a TV-B-Gone!"

Over the next few years, Mitch worked away at the idea in his spare time. He's an electronics wizard and, at 48, a veteran of many Silicon Valley start-ups. When a company he owned shares in was sold, he took his $80,000 windfall and devoted himself to TV-B-Gone full time.

The invention was launched last fall, and it met with a press reception that ranged from mildly amused to wildly enthusiastic. His timing couldn't have been better. Every traveler knows about CNN in the airports, but now gas stations have begun hanging televisions above their pumps, and stores of every kind routinely confront their customers with TV sets beckoning them down the aisles. Wachovia Bank is placing televisions in the lobbies of all its branches to guard against the possibility that customers waiting in line might grow restless or, worse, begin to cogitate. Wal-Mart announced last month that it was heavily investing in thousands of new 42-inch high-definition LCD televisions, to be placed strategically throughout all its stores. Every Wal-Mart is already a riot of television screens, of course, but as a company spokesman complained to the "New York Times," the existing TV monitors were bolted "high above shoppers' heads and easily overlooked." Let them just try to overlook a 42-inch high LCD screen. Let them just try.

In times such as these many people will ache for something like the TV-B-Gone. Mitch's press has been so approving and so voluminous, with dozens of jokey stories in newspapers and magazines,"Wired" magazine featured the TV-B-Gone the day Mitch started up. That morning he sold 1,200 units online until his web server crashed. The next day he sold 2,300 more before the server crashed again. Since November he's sold another 40,000, with demand showing no signs of slack. Now, having been interviewed for ABC-TV, NBC-TV, and the CBS Evening News, Mitch has found himself cast in the unexpected role of sage, or oracle -- a prophet, even. He's happy to oblige. Television has done stranger things to people.

"What I want to do is, to take this annoyance of having TVs everywhere, and bring it back to the realm of choice," he says. "You should be able to choose whether you want this machine on or off. You should be able to think about it. Does having this thing talking at us, whether we like it or not, make our lives better, or worse, or what? Let's at least have a chance to think about it, and talk about it, and then make a choice."

Inevitably, there has been a backlash. CNN, which owns all those Blitzer-blaring TVs in all those airports, is reportedly trying to concoct a way for its TV monitors to identify a remote signal from a TV-B-Gone and ignore it. ("That's okay," says Mitch with a shrug. "I'll just make a TV-B-Gone Deluxe.") And professional ethicists have begun to sniff their disapproval. "The use of TV-B-Gone is unilateral self-interested conduct," wrote Jack Marshall in a communiqué from his "ethics training" firm, ProEthics, Ltd. In airports, for example, authorities have "determined that travelers would appreciate a television." Any traveler who turns off the TV is thus resorting to "vigilante action."

But that scarcely seems a fair picture of today's airports, does it? By dotting their property with television screens, the authorities aren't offering a service. They're engaged in a commercial transaction, selling access to a helpless, captive audience (us) to the highest bidder. If there's a violation of the social compact here, it came when the airport authorities -- managers of a public accommodation, after all -- decided to fill their air with unsolicited din. A quick flick of the TV-B-Gone merely restores the more civilized status quo ante.

Even some of Mitch's fellow gadget-heads have turned against his invention, and against him. "Mitch Altman is an a**," announced Gizmodo, Gawker.com's survey of consumer electronics, in a review of the TV-B-Gone. "And not just any a** but one of those snotty holier-than-thou types who has nothing better to do... than to develop a device with the sole purpose of imposing his viewpoint on others. See, Altman hates the television and its encroachment into public space. Rather than just doing what most everybody else has done -- which is either not really caring or, failing that, getting the f***- over it -- Altman has invented a device called the 'TV-B-Gone.'"

The Gawker critic has, in addition to a terrible case of potty mouth, a point, sort of; at least he's accurately identified what irritates him about Mitch and about Mitch's invention. Mitch offends a certain kind of modern sensibility because he is a moralist who means it. And it's not just television's violation of public space that Mitch dislikes; it's television itself. There's a reason the TV-B-Gone has only an off switch and not a channel-changer. His hostility to TV is global, indiscriminate -- all TV is pretty much the same to him. I think he'd get as much pleasure zapping Charlie Rose as Elimidate.

TV-B-Gone appears just as Americans -- well, a couple of us -- prepare to celebrate the twentieth anniversary of "Amusing Ourselves to Death," Neil Postman's great book-length anti-TV screed from 1985. Mitch is a merry moralist and Postman was a dour one, given to jowl-shaking declarations of doom, but his book is worth rereading today, as prescient in its unhappy way as the work of Marshall McLuhan. "Television," wrote Postman, has become "so familiar and so thoroughly integrated with American culture that we no longer hear its faint hissing in the background or see the flickering gray light." At the same time, he said, "to enter the great television conversation, one American cultural institution after another is learning to speak its terms." Not just retail stores and airports and gas stations, but libraries and museums and concert halls, too.

Postman published "Amusing Ourselves to Death" at a crucial time for gloom-and-doomers. They were still recovering from the Great 1984 Scare and the terrible letdown that followed it. For thirty years worrywarts in the United States had expected a totalitarian curtain to fall across the land, just as George Orwell had foretold in his novel 1984. And then when the year finally arrived, all the alarmists got was the Los Angeles Olympics and the Reagan landslide. Postman was the first intellectual, so far as I know, to announce that the alarmists had been looking in the wrong direction: The dystopia that threatened a happy, prosperous country like ours wasn't Orwell's "1984" but Aldous Huxley's novel "Brave New World," where technology, especially television, isn't a tool of repression but a lullaby, an instrument of distraction and somnolence: "In Huxley's vision," Postman wrote,

Not even Postman, 20 years ago, could have predicted the constant presence of publicly displayed, privately controlled televisions wherever unsuspecting Americans gather to twiddle their thumbs. I doubt that any of Mitch's customers really thinks we've arrived at Huxley's Brave New World. Our present condition doesn't necessarily entail "grave threats to our autonomy." But it does contain a host of subversive annoyances that can be tolerated only by the happy, compliant, slack-jawed citizens that Huxley described. And to this world, not so brave but very new, Mitch's device is the perfect response. Don't leave home without it, as they say on TV.

Andrew Ferguson is a senior editor at The Weekly Standard.