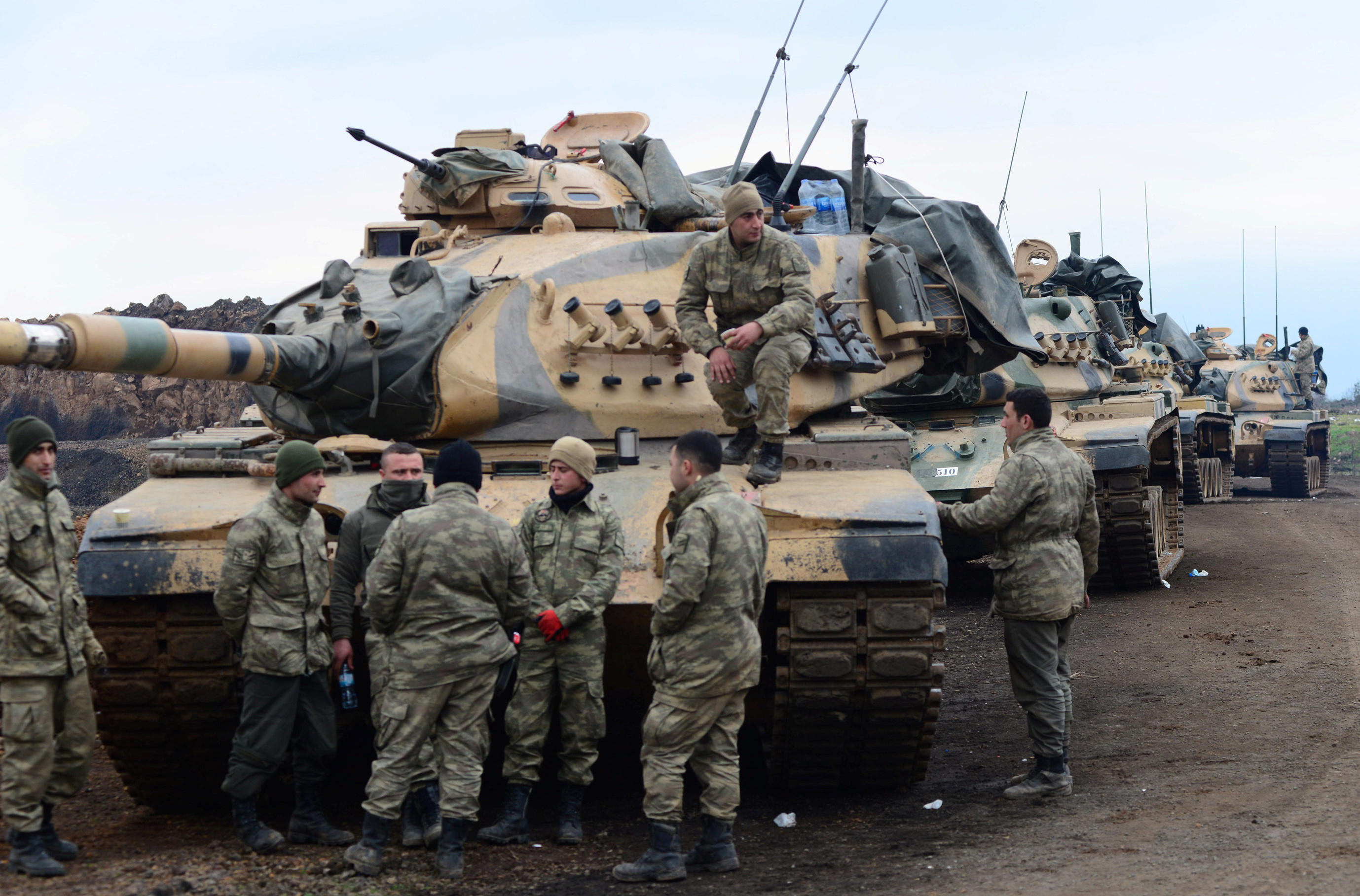 HASSA, Turkey -- Turkish troops and Syrian opposition forces attacked a Kurdish enclave in northern Syria on Sunday in their bid to oust from the area a U.S.-allied Kurdish militia, which responded with a hail of rockets on Turkish towns that killed at least one refugee.

The Turkish offensive on Afrin, codenamed Operation Olive Branch, started Saturday and has heightened tensions in the already complicated Syrian conflict, threatening to further strain ties between NATO allies Turkey and the United States. It prompted condemnations from the Syrian government, Iran and Egypt.

France called for an emergency U.N. Security Council meeting to discuss the developments there and urged Turkish authorities "to act with restraint in a context where the humanitarian situation is deteriorating in several regions of Syria."

Turkish officials said the troops entered Afrin a day after dozens of Turkish jets and artillery units at the border pounded Syrian Kurdish targets. A spokesman for the Kurdish fighters said the attack was repelled.

Turkey considers the Syrian Kurdish militia, known as the People's Protection Units, or YPG, a terror organization and a security threat because of its affiliation with Kurdish rebels fighting in southeastern Turkey.

The group controls Afrin, in Syria's northwestern Aleppo province, as well as a swath of territory to the east along Turkey's border. The YPG also forms the backbone of the Syrian Democratic Forces, the main U.S. ally against the Islamic State of Iraq and Syria (ISIS) terror group in Syria.

There was no immediate U.S. comment on the operation in Afrin where it does not maintain troops. But U.S. officials have said that the administration had appealed to Turkey not to go ahead with the offensive. A Turkish operation there could have an impact on U.S. operations further east in Syria, the officials said.

The operation, for which Turkey has also rallied nearly 10,000 Syrian opposition fighters, could spill into a wider Turkish-Kurdish confrontation inside Turkey. There is an estimated 8,000 to 10,000 Kurdish fighters in the Afrin district, the Turkish prime minister said.

The operation also includes airstrikes on the district, threatening to create another humanitarian disaster in the region. The Afrin district houses no less than 800,000 civilians, including displaced people from earlier years of the Syrian war. Russia pulled back troops that had been deployed near Afrin after it was briefed on the operation by Turkey.

On Sunday, the state-run Anadolu Agency said the Turkish-backed fighters had penetrated 5 kilometers (3 miles) into Afrin as part of the offensive. At least one person, a Syrian refugee in Turkey, was killed when Reyhanli, a Turkish border town, came under a hail of rockets Sunday.

It was the second Turkish town to come under attack. Earlier, the rockets fired from Syria targeted the border town of Kilis, but there were no casualties.

In a statement, the Syrian opposition fighters battling alongside the Turkish troops said the combined force seized Shankal, a village on the northwestern edge of Afrin district. A Syrian rebel commander said the clashes with the YPG fighters were intense, but that the Turkey-backed forces would fight to "eliminate terrorism" from the area.

Sepan Jan, a journalist in Afrin, said stores and services were operating normally in the town and district. Residents in border villages were taking precautions against the bombings, he said. The only road out of Afrin, leading to government-controlled Aleppo, has been closed for security, he added.

Turkish President Recep Tayyip Erdogan has vowed to expand the offensive to Manbij, a town to the east that Kurdish forces seized from ISIS in a costly battle with the aid of the U.S.-led coalition. The town has since emerged as a model for U.S.-backed Kurdish rule of largely Arab areas.

An advance on Manbij by NATO member Turkey would strains relations with Washington, which has troops operating in the Manbij area.

Turkish troops first crossed into Syria after the Kurds captured Manbij in 2016, in part to prevent them from expanding westward and linking territory to Afrin. At least 70 Turkish soldiers were killed, most in battles with ISIS, which has since been driven from nearly all the territory it once held in Syria.

Syria's government had vowed to shoot down any Turkish fighter jets over Afrin, calling it an "aggressive act." On Sunday, President Bashar Assad condemned the "brutal aggression" on Afrin but didn't repeat the threat. He said Turkey has always supported "terrorists" in Syria.

Iran, a close ally of Assad, also condemned the Turkish assault and called on Turkey to end it.

Egypt, which maintains security coordination with Syria and is at odds with Turkey, also condemned the military offensive and said it threatened political negotiations.

Turkey has prepared around 10,000 Syrian fighters to storm Afrin, according Rami Abdurrahman, director of the Syrian Observatory for Human Rights, a Britain-based monitoring group.

A Syrian commander speaking to The Associated Press by phone from northern Syria said there were thousands of fighters positioned in Azaz, at the frontier with the Kurdish enclave, awaiting orders. Another commander said hundreds more were stationed in Atmeh, south of Afrin. The officials spoke on condition of anonymity because they were not authorized to speak to the media.