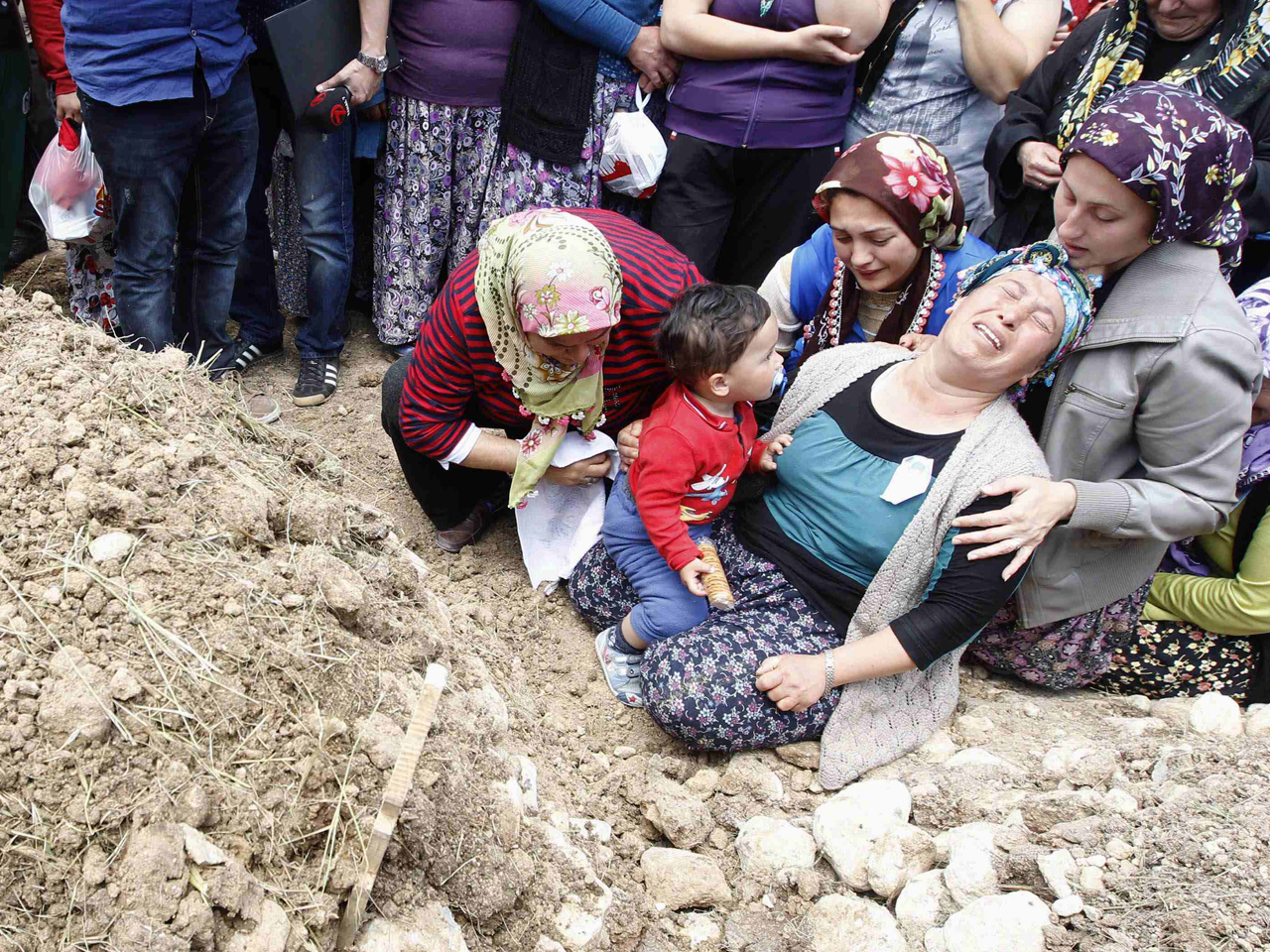 Hundreds of people were attending funerals for the victims in the western mining town of Soma; dozens and dozens of graves have been dug, ready to receive the bodies.

Although 363 miners were rescued, some 150 more have not been accounted for. No miner has been brought out alive since early Wednesday. Mourners at the funerals said they spent their lives fearing something like this.

"The wives of the miners kiss their husbands in the morning. When they come back, even if they are five minutes late, everyone starts calling. You never know what is going to happen," said Gulizar Donmez, 45, the daughter and wife of a miner and neighbor of one of the victims.

CBS News correspondent Holly Williams reports that that families' desperation has boiled over into rage aimed squarely at the government. Many in Turkey believe Erdogan's administration is too close to the mining companies and too lax in enforcing safety standards.

Erdogan, who is expected to soon announce his candidacy for presidential elections in August, was forced to take refuge at a supermarket during his visit to the area Wednesday after angry crowds called him a murderer and thief and clashed with police.

Turkish newspapers Cumhuriyet, Milliyet and others on Thursday printed photographs they said were of an Erdogan aide kicking a protester who was on the ground and being held by special forces police during the scuffles. The papers identified the aide as Yusuf Yerkel.

Erdogan had earlier downplayed the disaster, calling mining accidents "ordinary things" that also occur in many other countries, after giving examples of 19th-century mine accidents in Britain.

Erdogan has made no secret of his desire to become Turkey's first popularly elected president. His party swept local elections in March despite a corruption scandal that forced him to dismiss four government ministers in December and later also implicated him and family members. Erdogan denies corruption, calling the allegations part of a plot to bring his government down.

Protests broke out in Istanbul, Ankara and other cities over the deaths and poor safety conditions at mines around the country. Turk-Is, Turkey's largest trade union confederation representing some 800,000 workers, joined a one-day strike by other unions to demand better conditions for workers.

Workers in the mining region of Zonguldak, obeying the strike, gathered in front of a pit but did not enter it. In Istanbul, a group chanted anti-government slogans and carried a large banner that read: "It's not an accident, it's murder."

With hopes for the missing miners fading, Energy Minister Taner Yildiz told reporters that rescue efforts were focusing on two areas inside the mine, but Williams said rescue workers had told her Thursday that operations were suspended the previous evening as burning coal inside created toxic fumes and risky condition, and hadn't yet resumed.

The government has said 787 people were inside the coal mine at the time of Tuesday's explosion. Scores of those rescued suffered injuries.

The death toll has topped a 1992 gas explosion that killed 263 workers near Turkey's Black Sea port of Zonguldak.

Authorities said this week's disaster followed an explosion and fire at a power distribution unit, and most deaths were caused by carbon monoxide poisoning.

Erdogan promised the tragedy would be investigated to its "smallest detail" and that "no negligence will be ignored." Hurriyet newspaper reported Thursday that a group of 15 prosecutors has been assigned to investigate the accident.

Mining accidents are common in Turkey, which is plagued by poor safety conditions. Tuesday's explosion tore through the mine as workers were preparing for a shift change, which likely raised the casualty toll.

Turkey's Labor and Social Security Ministry said the mine had been inspected five times since 2012, most recently in March, when no safety violations were detected. But the country's main opposition party said Erdogan's ruling party had recently voted down a proposal to hold a parliamentary inquiry into a series of small-scale accidents at the mines around Soma.