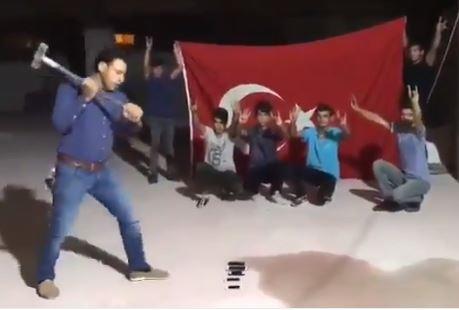 Turks are taking sledgehammers, handguns and fire to iPhones in a symbolic backing of their government as it clashes with the Trump administration over a jailed American pastor. Videos showing Turkish citizens stomping on or otherwise destroying iPhones have proliferated online in recent days, following President Recep Tayyip Erdogan's call for Turks to boycott U.S. products -- specifically the smartphones made by California tech giant Apple.

Erdogan issued the call and announced a massive hike in tariffs on U.S. goods this week after the U.S. raised tariffs on Turkish imports and aimed new sanctions at Turkish officials in the row over American Pastor Andrew Brunson, who remains under house arrest pending his trial in Turkey on charges of espionage and terrorism.

The U.S. government insists the charges against Brunson are contrived and that he is an innocent family man being held for political reasons. Brunson had lived in Turkey for more than 20 years prior to his arrest. He was jailed for about two years before being moved to house arrest last month.

President Trump demanded Turkey free Brunson and then followed through with his threat to hit Ankara with sanctions and tariffs when he wasn't released.

Erdogan's government insists the Turkish judicial system must be respected, and Brunson's fate currently rests with a court in Ankara that is expected to rule on the American's legal appeal for release this week. A lower court rejected the appeal on Wednesday, but Brunson's lawyer suggested to CBS News that he still had hope the higher court would reverse that decision.

The feud escalated into an economic battle with global consequences this week as the Turkish currency, the lira, plummeted in value over fears of the country's economic stability stemming from the harsh U.S. sanctions.

Erdogan refused to relent, leveling the retaliatory measures on U.S. products and urging his citizens to reject American products.

In one of the videos circulating online in Turkey, which have been picked up by the country's online news organizations, an unidentified man with four boys kneeling behind him in front of a Turkish flag, addresses the U.S. leader directly, asking Mr. Trump, "who do you think you are?"

"If you threaten us with hunger you will only make us laugh. Do whatever in your power," he says, before taking a sledgehammer to iPhones handed over by the boys. "Look now what will happen to you iPhones on the orders" of Erdogan.

Another video shows a lawmaker from the Turkish Nationalist Movement Party, Cemal Enginyurt, buying a Samsung smartphone and asking a fellow party member to throw his old iPhone on the floor and jump on it. His colleague complies, proclaiming that "the U.S. is being dragged across the floor."

Other videos show a man shooting his iPhone point blank with a handgun, one being burned in a box full of matchsticks and another, circulated online by an Israeli journalist, of a Turkish boy dumping a bottle of Coca-Cola down the toilet -- all in solidarity with Erdogan. Some Turkish news outlets have

As CBS News correspondent Holly Williams reported on Wednesday, angry Turks have also torn up fake dollar bills in protest. While many in the country believe the crisis is the fault of the U.S., even though experts have been warning of danger signs in the economy for months, Williams says some Turks do blame authoritarian President Erdogan for the crisis.

The lira has regained some of its value in the last 24 hours, following pledges from Arab nations to pour billions of dollars of funding into the Turkish economy.

CBS News' Pinar Sevinclidir in Ankara and Ahmed Shawkat in Cairo contributed to this story.