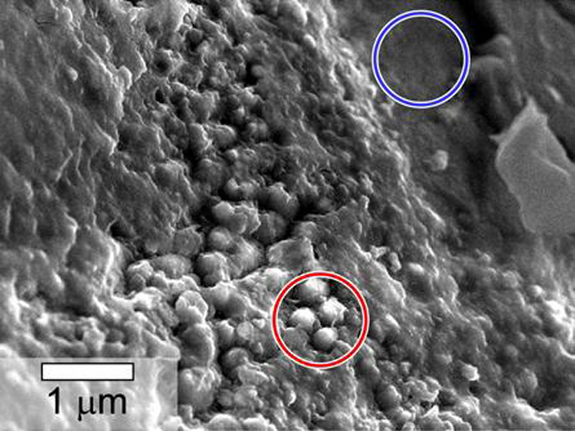 The discovery of tiny carbon-rich balls and tunnels inside a Martian meteorite has once again raised the possibility that the Red Planet was teeming with primitive life millions of years ago.

The meteorite, which fell to Earth during the Stone Age, contains microscopic burrows and spheres that resemble the marks microorganisms leave when they eat through rocks on Earth, scientists report in the journal Astrobiology this month. What's more, these features seem to have been pressed into the Mars rock before it was hurled off the Red Planet by an impact event, the researchers add.

The authors of the new research are not claiming they've found evidence of ancient life on Mars. In fact, nowhere in their paper do they use the word "life." (Their preferred term is "biotic activity.") But their findings revive the debate about the possibility of microbes in Mars' past and highlight how much information scientists can actually glean from Martian meteorites that end up on Earth. [The Search for Life on Mars (A Photo Timeline)]

"It further strengthens the case for past life on Mars, but, of course, it is by no means proof," said astrobiologist Dirk Schulze-Makuch of Washington State University, who was not involved in the study.

Scientists haven't yet found any solid proof that life actually existed on ancient Mars -- but they have found evidence that the planet could have been habitable. Though Mars is barren today, scientists think water -- a key ingredient for life -- would have covered its surface in the form of oceans, rivers and streams. And last year, NASA's newest Mars rover, Curiosity, discovered the first evidence that the Red Planet could have supported living microbes billions of years ago.

While Mars rovers, landers and satellites are hunting for life-friendly conditions on the Red Planet, scientists also can look for evidence of ancient life in Martian meteorites that have landed on Earth.

The meteorite at the center of the new study is known as Yamato 000593. The 30-lb. (14 kilograms) rock was found by scientists with the Japanese Antarctic Research Expedition in 2000 at the Yamato Glacier in Antarctica. Researchers believe it formed on Mars 1.3 billion years ago and was altered by water during the Red Planet's wet past before being blasted to Earth during the last 10,000 years.

The study's principal investigator, Lauren White, a researcher at NASA's Jet Propulsion Laboratory in Pasadena, Calif., said the main goal of the research was to find out whether the tunnels and carbon-rich spherules inside the meteorite were indigenous or the result of contamination on Earth.

"The paper isn't really meant to identify if these features were formed from biotic or abiotic means, but rather to discover if these features are actually Martian in origin," White told Space.com in an email. "We compare this meteorite, Yamato -- which was discovered in Antarctica -- to another Martian meteorite, Nakhla, which fell in Egypt."

The Nakhla meteorite dropped from the sky in 1911 in Egypt. In 2006, scientists reported that this 1.3-billion-year-old Mars rock also had a series of microscopic tunnels that resembled the trails of bacteria on Earth.

White said similarities between Yamato and Nakhla strengthen the case for a Martian origin. The team also looked at another meteorite, dubbed LEW87051, found in 1987 in Antarctica, as a control. It's unknown where this space rock came from, but a Mars origin had been ruled out because of the rock's concentration of oxygen isotopes.

This non-Martian meteorite, which was exposed to the same Antarctic environment as Yamato, did not contain any of the microscopic tunnels that were observed in both Martian meteorites. White said this bolsters the argument that the features are Martian, and not created by contamination, though she noted it would be difficult to prove that any meteorite on Earth contains traces of alien life.

"To really determine [ancient life on Mars] in a 'smoking gun' fashion we would need a sample return mission from Mars -- samples free of any contamination," White said.

The study authors also wrote that they couldn't rule out the possibility that these tiny fossils are the result of abiotic (or nonliving) processes.

"However, textural and compositional similarities to features in terrestrial samples, which have been interpreted as biogenic, imply the intriguing possibility that the Martian features were formed by biotic activity," the authors wrote in their paper.

Chris McKay of NASA's Ames Research Center in Moffett Field, Calif., who was not involved in the study, said he was doubtful that the scientific community would be swayed by "textural and compositional similarities" as proof of a biological origin.

"At the small scales involved, shapes and compositions are not compelling indications of function," McKay said in an email. He and other researchers who were not involved in the study said they would need stronger evidence before the science community could declare Martian life found.

"It would be hard to find compelling proof of extraterrestrial life in a meteorite short of isolating an organism that grows in the lab but does not have Earth DNA," McKay said.

More intriguing evidence, McKay added, would be a set of complex biomolecules like proteins and DNA that don't resemble anything on Earth life but are too complex to have arisen abiotically. Schulze-Makuch also noted that a better indicator of life on Mars would be "the presence of DNA, some other nucleic acid or organic macromolecules that could be a breakdown product of a nucleic acid associated with these microfeatures."

Astrobiologist Louisa Preston of the U.K.'s Open University said the authors of the study "have done well not to cry wolf and to scientifically speculate on the tubules' origins, accepting that, as of yet, they do not know whether they are of biological origin or not."

Martian meteorite clues of the past

The new study is years in the making and it comes 18 years after the controversy surrounding the oldest meteorite from the Red Planet, known as Allan Hills 84001 (ALH 84001). The Mars rock made headlines in 1996 when researchers, led by David McKay, from NASA's Johnson Space Center, claimed in the journal Science that the meteorite contained evidence of possible Red Planet life forms.

McKay (who is unrelated to Chris McKay) died last year. He is listed as a co-author on the new Astrobiology paper, which was actually first submitted nearly four years ago, White said, but McKay's illness and death stalled publication.

"His loss was very difficult for all of us, but Dr. McKay was an inspiration to me," White said in an email. "This work was his life and legacy, and when I spoke at his funeral, I talked about the fact that I want to continue his legacy by continuing research in the field of astrobiology."

Adults seeking to relive happy childhood memories can sign up for a weekend summer camp, but they have to surrender all gadgets including phones, tablets and even watches
Thanks for reading CBS NEWS.
Create your free account or log in
for more features.
View CBS News In
CBS News App Open
Chrome Safari Continue
Be the first to know
Get browser notifications for breaking news, live events, and exclusive reporting.