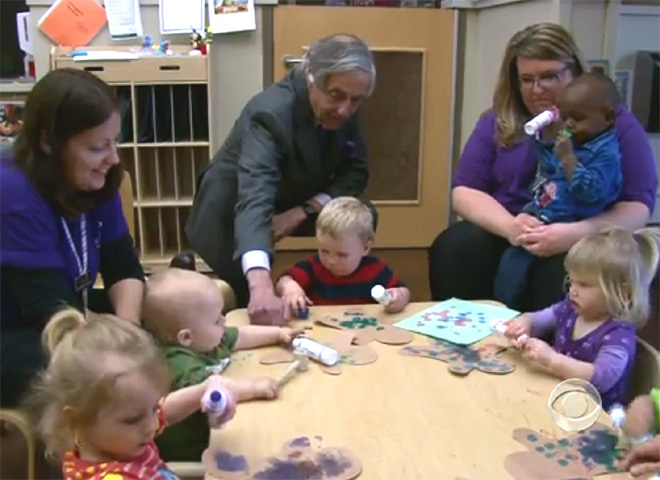 This is Part Two of a feature on pre-K education; to read Part One click here.

(CBS News) TULSA, Okla. -- George Kaiser amassed a fortune in oil and banking, and he rarely grants interviews. But he agreed to talk to CBS News about his passion for early childhood education.

After all, his foundation spends $20 million a year on pre-K programs directed at low income families in Oklahoma.

Kaiser says his commitment derives partly from a sense of guilt.

"I realized that I got where I got, as most of us did, based on dumb luck," said Kaiser, 70, who took over his family's oil business 44 years ago. "Warren Buffett puts it the best when he said that some of us win the ovarian lottery, and some of us do not.

"So, I think it's a moral obligation for all of us -- it's incumbent on all of us to try and level the playing field to some degree for those who didn't have the advantages we secured."

Classrooms are state of the art. Teachers have college degrees and training in early childhood development.

The actual cost of Educare is $24,000 a year per child, but it's free for families that get in.

"It is very expensive to provide 50-week-a-year, eight-hour-a-day education for infants and toddlers," Kaiser said. "It is less expensive than not doing it, but it's expensive to do it.

"The cost in the end is negative because the benefits to society from providing early childhood education to infants and toddlers is repaid with a return in the form of reduced correctional system costs, reduced special education, and a better educated work force, and greater financial and educational obtainment by the kids that have gone in the program."

WEB EXTRA VIDEO: To watch an expanded interview with George Kaiser click on the video player below.

In a public-private partnership with the Oklahoma State Department of Education and Tulsa Public Schools, Kaiser's foundation underwrites Educare and the cost of 13 pre-K schools run by the Community Action Project, which serves 2,100 children from low-income families. The schools, like the Educare centers, also offer parenting and career advancement classes for adults.

"Clearly, I'm disturbed by inequality, and inequality in American society is growing," Kaiser said. "I wouldn't want to destroy equality by knocking down the haves. I would rather do it by bringing up the have-nots."

Kaiser focuses his giving in Tulsa, because the city gave his parents a fresh start after they fled Nazi Germany before the start of World War II. Kaiser was born in Tulsa and is a lifelong resident.

His father co-founded Kaiser-Francis Oil Company, which he took over in 1969. Forbes magazine estimates Kaiser's wealth at $10 billion. Like Buffett, Kaiser has taken the Giving Pledge, dedicating at least half his fortune to philanthropic causes.

Educare centers are located near public schools, which is something Jenifer Sotelo appreciates. As a teenage mother, she had dropped out of school for a year.

But when her son, Jaden, got a slot in Educare, Sotelo was able to go back. After dropping off Jaden -- now 19 months old -- in the morning at Educare, she attends Nathan Hale High School right across the street.

"I am doing this because my child inspires me, and he's my motivation for me to pursuing my dreams," she said. "I want him to be proud of me."

Sotelo is set to graduate next month as her class valedictorian, and said she is interested in studying law and international relations.

During a campaign fundraising trip to Oklahoma in 2007, then-candidate Barack Obama visited the first Educare center. In his State of the Union address last January, President Obama lauded Oklahoma's efforts to increase access to pre-K.

On Sunday, at a commencement speech at Ohio State University, President Obama reiterated, among his priorities, the need "to educate more children at a younger age."

Kaiser echoes that message to business people looking for a way to make a difference for the economically disadvantaged: invest in early childhood education.

"We have strong evidence that it works, it pays, and it's the right thing to do. Not just one of those three," Kaiser said. "We are flailing at an enormous problem, and hope we make a few dents in it."

Brett Favre suspended from radio show amid scandal
Thanks for reading CBS NEWS.
Create your free account or log in
for more features.
View CBS News In
CBS News App Open
Chrome Safari Continue
Be the first to know
Get browser notifications for breaking news, live events, and exclusive reporting.