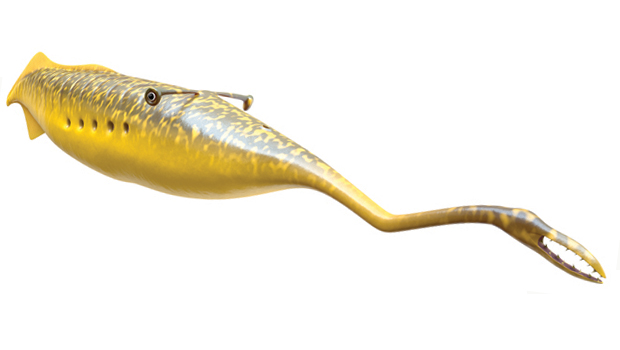 A prehistoric creature known as the Tully Monster (official name: Tullimonstrum gregarium) has puzzled scientists since it was first discovered by an amateur fossil collector in Illinois in 1958. The bizarre aquatic creature, which lived more than 300 million years ago, possessed a tube-shaped body and a long proboscis, or snout, tipped with a tiny jaw with teeth. Its eyes dangled at the end of short stalks. Paleontologists, who characterized the creature as a soft-bodied invertebrate, didn't know if it was a worm, a mollusk or a shell-less snail.

But now, after an analysis of over 2,000 specimens from the Field Museum in Chicago, this monster has its place on the tree of life.

Yale graduate student Victoria McCoy and colleagues from the Field Museum of Chicago, Argonne National Laboratory, and the American Museum of Natural History say their research shows that the animal was a vertebrate similar to today's lamprey.

"This is important because it confirms our general view that by 300 million years ago, most animals fell within the major groups we know today," McCoy told CBS News via email. "Also, the group of modern lampreys today is just a remnant of a much larger, more diverse group that existed in the past. By identifying the Tully Monster as a stem lamprey, we are beginning to see the range of diversity that existed in that group."

"It's a beautiful example of how science works to solve mysteries of nature, and how museums fit in," Scott Lidgard, Field Museum curator of invertebrate paleontology, said in a press release.

The Tully Monster, designated the state fossil of Illinois in 1989, is important to the world of science and the field of paleontology. The species has only been found in the Mazon Creek region of Illinois, about 90 minutes southwest of Chicago. When the Tully Monster flourished there millions of years ago, the area was a swampy shoreline bordering on a tropical sea.

"Mazon Creek is an amazing window into deep time," Lidgard said. "Only a tiny fraction of all the kinds of creatures that have ever existed become fossils, and it's mostly hard parts like bone and shell that survive to tell the tale. Mazon Creek gives us an extraordinarily clear view of past life, preserving even insects, jellyfish, and the Tully Monster."

He added, "Research like this is a great way of learning where our world today comes from."

Even though this particular scientific mystery has been solved, McCoy says there is still much more to be learned about the oddities of the Tully Monster. "I would definitely like to investigate more details of the ecology of the Tully Monster," she said, including "how it swam, how it ate, the field of vision, [and] the range of motion of the proboscis."