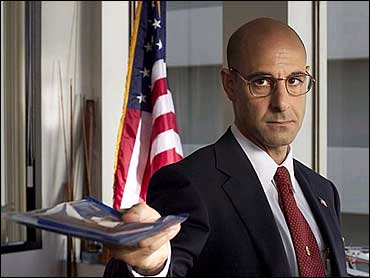 If you've ever traveled on an airplane, chances are you've experienced the dreaded airport delay. But try to imagine that time stretching into a few hours, a few days, a few weeks, and even a few months.

In the new comedy, "The Terminal," Stanley Tucci stars as Frank Dixon, an uptight customs director responsible for a foreign traveler (Tom Hanks) who becomes a man without a country while in flight to the United States.

Tucci had worked earlier with Hanks in "Road to Perdition," and was excited to be in a film with him again. "He's so funny," Tucci tells The Early Show co-anchor Hannah Storm about Hanks as Viktor Navorski.

Tucci's character starts out between a rock and a hard place. Rules and regulations prohibit him from letting Viktor leave the airport, but when Viktor's constant presence threatens to jeopardize Dixon's career, he'll do just about anything to get Viktor out of the terminal.

The movie takes us behind the scenes into airport life, which would seem to be pretty mundane, but somehow director Steven Spielberg makes it into an entertaining movie.

Says Tucci, "Most people could not make a film that takes place in one space and keep it entertaining and keep the thing moving forward, but Steven does it beautifully."

What drew Tucci to the project was the opportunity to work with Spielberg, as well as the script. The actor says his character is very well-written, adding, "It's a really wonderful role. He's a complex character, which always appeals to me."

Next for Tucci is "Shall We Dance," a film with Jennifer Lopez and Richard Gere, for which he says he had to learn Latin ballroom.