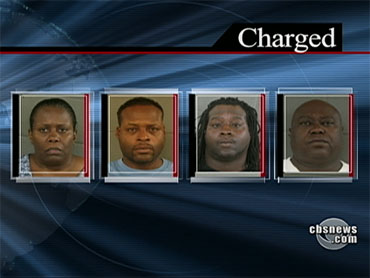 Tom Hanks has teamed up with director Steven Spielberg twice on the big screen -- and the results have meant both critical acclaim and blockbuster box-office.

In 1998, Hanks played a World War II captain looking for a lost soldier in "Saving Private Ryan." And in 2002, the actor portrayed an FBI agent hot on the trail of a master con artist in "Catch Me If You Can."

Now, Hanks and Spielberg are hoping their winning streak continues with the new film "The Terminal."

Spielberg was not involved in the project when Hanks signed on. Hanks tells The Early Show co-anchor Harry Smith, "I signed on for the screenplay, which I thought was a great idea. Not long after that, Stephen came in."

It's the storyline that attracted Spielberg's interest, explains Hanks, adding, "It was written from a story by (executive producer) Andrew Nicoll and a screenplay by Sacha Gervasi. It read like it was a house on fire. Whenever you come across something like, I've never seen it before, I can't believe no one thought of this before and it plays itself out in a logical, wonderful way. I'm not surprised Stephen got excited about it."

"He is a native of a former Soviet republic somewhere between the Balkans and the Baltics," explains Hanks about the made-up country. "We actually thought about this. It had to be deep enough in the former Soviet Union to have a geographical, like, broadcast distance from all things American and western. It had to be a hard place to get to, a hard place to get the radio. So where you could only understand that the life between the Soviet era and today is really not all that different."

The problem is, his homeland suddenly becomes politically unstable while he is in the air, en route to America, and so he finds himself a man without a country.

Hanks explains, "His papers are no good; his passport is no good; his visa is no good. The homeland security department does its job. It says you're not coming into the country, but we can't send you home either because there are no planes flying back. So he lives in a very luxurious international departures and arrivals terminal at JFK."

Soon, days turn into weeks, and weeks turn into months, and "the madcap adventures ensue," Hanks says, as Viktor finds new friends, love and a new home on his indefinite stay at the airport hub.

Some Facts About Tom Hanks