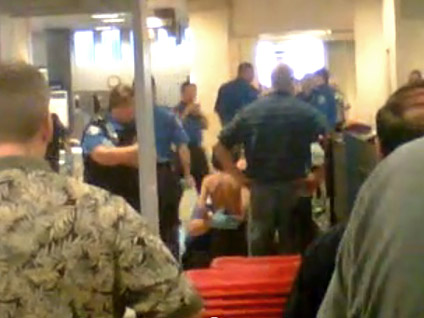 Fueled by blogs and the conservative news aggregator The Drudge Report, a video entitled "Young Boy strip searched by TSA" went viral over the weekend, garnering more than 715,000 views on YouTube.

According to the person who uploaded the video, it was shot on November 1http://blog.tsa.gov/2010/11/response-to-young-boy-strip-searched-by.html%209th at Salt Lake City International Airport. Here's how the uploader describes what happened before the video began:

"...the boy went through a metal detector and didn't set it off but was selected for a pat down. The boy was shy so the TSA couldn't complete the full pat on the young boy. The father tried several times to just hold the boys arms out for the TSA agent but i guess it didn't end up being enough for the guy. I was about 30 ft away so i couldn't hear their conversation if there was any. The enraged father pulled his son shirt off and gave it to the TSA agent to search, thats when this video begins."

The uploader writes that he tried to talk to the father and son after shooting the video but was stopped by "a man in a black suit" who asked why he was videotaping "procedures of the TSA." He writes that the man repeatedly pressured him to delete the video and was trying to "intimidate me to obey."

The video played almost perfectly into Americans' fears about new Transportation Security Administration procedures going too far, providing fodder for critics' complaints of a system that allows an unnecessary "strip search" of a shy and innocent child followed by a Big Brother-like attempt to suppress evidence of the incident.

The TSA apparently realized it had a problem, which is why today it posted a blog post responding to the video.

"Many are coming to their own conclusions about what's happening in the video which is now perched at the top of the Drudge report and being linked to in many other blogs and tweets," writes the TSA blogger. "We looked into this to find out what happened."

The blogger, "Blogger Bob" of the "TSA Blog Team," confirms that the incident took place November 19th in Salt Lake City. But the TSA's interpretation of what happened to the family is very different than that of the uploader.

"Their son alarmed the walk through metal detector and needed to undergo secondary screening," the TSA blogger writes. "The boy's father removed his son's shirt in an effort to expedite the screening. After our TSO completed the screening, he helped the boy put his shirt back on. That's it. No complaints were filed and the father was standing by his son for the entire procedure."

The blogger adds that "you will not be asked to and you should not remove clothing (other than shoes, coats and jackets) at a TSA checkpoint."

"If you're asked to remove your clothing, you should ask for a supervisor or manager," he concludes.

News reports about what critics say are overzealous screening procedures are proliferating: Here's one story entitled "TSA Makes Cancer Victim Remove Prosthetic Breast,"  and here's a post entitled "TSA Screening Soaks Bladder Cancer Survivor with His Own Urine."  A story about a person being arrested for refusing the security procedures is entitled "TSA airport screeners gone wild in San Diego- again;" here's one called "TSA pats down a screaming toddler."

Secretary of State Hillary Clinton probably didn't help matters when she said on CBS' "Face the Nation" that she would not submit to a pat-down "if I could avoid it," adding, "I mean, who would?"

Meanwhile, as the story at left shows, there is now "specialized underwear" being made to keep the TSA scanners from getting a clear view of what has become known in the debate over the security procedures as one's "junk."

Politicians are also criticizing the TSA: Louisiana Republican Governor Bobby Jindal said on NBC's "Meet the Press" yesterday that "the American people are worried when they see an administration worried about reading Miranda rights to the underwear bomber."

He added, as The Hill reports: "[They're] so worried about rights of the terrorists, what about the rights of innocent American travelers?"

President Obama said over the weekend that he can "understand people's frustrations" with the screenings and is looking for a less intrusive option, though he's been told that for now at least there is not one. The TSA says it is continuing to refine its procedures and may change them - but also stresses that it is trying to keep the nation's air travelers safe from terrorists. (A TSA official tells CBS News there are no imminent changes planned, which means that the current procedures will likely be in place for the Thanksgiving holiday weekend. The official stressed that a very small percentage of passengers get pat downs.)

The TSA can take at least some solace in the fact that according to CBS News polling, four in five Americans say they support the use of full-body airport scanners - a finding the TSA blog was sure to note.